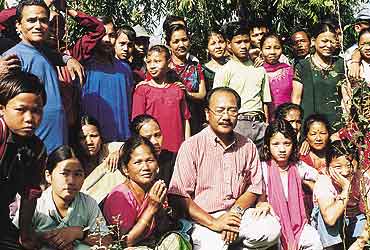 outlookindia.com
-0001-11-30T00:00:00+05:53
Palakkad, Kerala, April 14, 2004. The Great Indian Circus show is in full swing, but backstage there is commotion. Indra Dahal of the Nepal Child Welfare Foundation (NCWF) and three Indian colleagues from the South Asian Coalition on Child Servitude (SACCS) are here to 'raid' the circus. They want to rid it of its child labour. Dahal waits to talk to child artistes as they come off stage. "I went near the girls' tent. I told the children who I was, that they were safe and could come with me."

Accompanying the 'raiders' are three parents who have come from Makwanpur district in Nepal, an area notorious for child trafficking to India. One, Bishnu Maya, says, "I saw my son, Rajkumar. He is 18 and had been gone five years. Then I saw my 15-year-old daughter Laxmi. We all cried a lot." "The circus owner cried too," adds Laxmi, with a grim sense of humour. "It was the end of his business."

For a 'raid', this one's scrupulously organised. The team has come with the local police, although, says Dahal, they came grudgingly. They were concerned about the circus owner and the local politicians who take bribes to let exploitative practices continue. That night, the circus' child artistes, all of them Nepali, were housed by district collector Sanjeev Kaushik. Over three tense days, the children were actually taken back by the owners; some were persuaded to stay. But once Kaushik ordered social welfare bodies to draft release orders, 30 young Nepalis from ages seven to 21 bid goodbye to circus life. For some, though, it's the start of another ordeal. In Coimbatore, Rajkumar ran away from the rescue party and hasn't been seen since. He was depressed on learning of his father's death and at having no earnings to take back home.
***
On the first weekend of May, Hetauda, the Makwanpur district headquarters in southern Nepal, presents an idyllic face to the visitor. The gulmohar trees are flaming, there's a healthy maize crop in the fields, avocados hang already plump from the trees months before their harvest. The countryside is thick with Maoist rebels but even they've given the anti-trafficking NGOs breathing space to carry on their work, says Philip Holmes of NCWF's partner organisation, the UK-registered Esther Benjamins Trust (EBT). At NCWF's local office, there is a happy gathering of circus returnees and their families, most of whom were reunited four days earlier in scenes of utmost emotion. Some had been separated for a decade.

"God's helped me," weeps Surja Lama, an elderly farmer-cum-Buddhist priest, clasping his hands above his head every minute. His 16-year-old daughter Uma is back after a year. "No one approached me about recruiting her," he says. Uma says a local agent, Dilip Kumar, paid her older brother 2,000 Nepali rupees (Rs 1,250) to persuade her to go to the circus. "I had to perform wearing very short, revealing clothes," she says. "I hated them. We weren't allowed to wear long dresses." One of her acts involved being lifted by an elephant by its trunk. "It was very scary. Sometimes the elephant would shake me quite violently." Laxmi actually broke her teeth when she fell off her bike during a performance. "I still had to take part in the show, doing the starkiss act where you hang on to a rope with your teeth, suspended from the roof of this tent."

Everyone reported constant beatings. For instance, Nisha, now 10, who is here in jeans, a pink top and wrists full of bangles. She, too, was recruited without her parents' permission and by the same agent. He told her she wouldn't have much work and would have time to read and study. It was all lies. "We were never allowed outside the circus. We had three shows a day and on festivals we performed all night," says Nisha.

Not everyone's had a happy reunion, though. Padmini went to the circus at age 15, five years ago. Her mother died meanwhile and she is in no hurry to meet her father, as it was he who took her to the circus along with an agent. She is at the home of an elderly aunt—two small rooms with goats and chickens scratching around outside. There is a deep sadness within her. The circus owner used the contract as a weapon, she recalls. "He told me, 'Your father has taken 20,000 rupees from me, so I can do what I like with you. I can even kill you'." He didn't need to, life in the ring was dangerous enough. Padmini had to balance a vertical sword in her mouth, the sharp end between her teeth, a flower pot at the other end. Holding it, she had to climb a stepladder. If it ever slipped, her face would have been sliced open. Speaking in Nepali would earn the children a beating; they had to converse in Hindi or Malayalam. 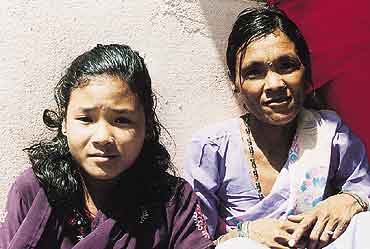 And Great Indian Circus was not alone in this carnival of cruelty. Since the event in Palakkad, 17 more Nepali children have been rescued from an Indian circus performing in Nepal. Last year, the EBT and its partners compiled a groundbreaking report on circus children in India. Across 29 circuses, researchers interviewed 230 children aged between 5 and 14; but at a conference in Delhi in August, circus owners admitted there were more children in the industry—up to 500. Nearly half were Nepali, most of the rest coming from West Bengal and Bihar. Khem Thapa, head of NCWF, says demand for Nepalis has increased as former feeder states like Kerala have become more educated. "Nepali children are also targeted because of their fair complexions," says Thapa. "The parents are far away, so there's little interference from them."

Both India and Nepal outlaw people-trafficking, but impoverished families who see no worth in education send their children away in return for cash from an agent. Often there is a five-year contract but in some cases no salary is actually paid, which makes it bonded labour. More than 80 per cent of the recruits are girls who, according to the report, are sought after by circuses for sexual reasons and have to wear scanty clothing and heavy make-up. One interviewee hinted at being sexually abused, but it's something not easily talked about.

The campaigners are trying to use the carrot instead of the stick. In January this year they secured the voluntary release of nine children from two circuses, although there were more. They even persuaded circus owners to sign a declaration directed at child-free circuses. Their aim, say the NGOs, is not to undermine circus as an art form. "Some of the circuses have started recruiting Russian adult artistes," says Thapa. "That's a good sign. The show will be much more professional, and fewer children will be taken."

But many Indian circuses are dragging their feet. Ironically, with the use of wild animals being banned in circuses, the demand for children has increased. Squeezed by cinemas, the industry feels under fire—not the ideal scenario for cleaning up its act.

In Hetauda, NCWF is working away to raise awareness at the Nepalese end, trying to expose agents and sending returnees back to school or finding them income-generating opportunities like beekeeping. "I feel very sad to think back to the circus and all the beatings I'd get," Padmini says. "Now I just want to learn a trade like tailoring, and get a bit of education."

(Charles Haviland is the BBC correspondent in Nepal.)

Along The Heart's Flow Chart