Sunil Gavaskar ended his career on a grand note. 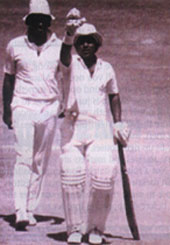 After four draws in a row in the five-Test series, the final match was designed to produce a result. The pitch at the Chinnaswamy stadium, Bangalore, was an under-prepared dust bowl, and there was no question of the match lasting the distance. On a surface that was more a track for a cross-country race than for playing cricket on, the ball's trajectory and bounce after pitching were entirely unpredictable. A mediocre twirler could have spun it square on this wicket; Maninder Singh was unplayable on the first day, and took 7 for 27 as Pakistan was skittled out for 117. India in turn, could not withstand the  double spin attack of Iqbal Qasim and Taufeeq Ahmed, and crumbled like the surface, all out for 145. Pakistan then put together an amazing team effort to hit up 249 - worth twice that many on a normal surface. India needed 216 to win, a target which, on that pitch, seemed  impossible.

Most human beings are shaped by circumstance, great men bend it to their will Where other batsmen, bewildered by the viciousness of the pitch, were either hitting out in frustration or playing premeditated strokes, Gavaskar played a measured innings, pitched just right in the bewildering cacophony of events. It was cricket at its apotheosis. Marking out the rough spots in the pitch, with an immaculate judgement of line and length, with assured footwork, with soft hands and a steely resolve, Gavaskar played everything with his bat. There were imponderables in the conditions, but a surety in Gavaskar's play that was out of the ordinary.

The rest of the team was, sadly, mortal. Wickets fell around him while he held firm, and he was eventually out after a crowd disturbance shook his concentration and a snorter from Qasim took his glove and flew to snipes. He made 96 in an innings where the second highest score was 26, and India lost.

To a man, the crowd stood and joined the Pakistani team in a standing ovation as, for the last time in Tests, Sunil Gavaskar walked back to the pavilion. Among the men clapping, Rameez Raja would later describe his innings as "pure genius", and Imran Khan would say that he "hadn't seen anything better". Gavaskar had saved his best for last.