The forgotten ashram in Sodepur, near Calcutta, was where a conflicted Gandhi put ahimsa on trial 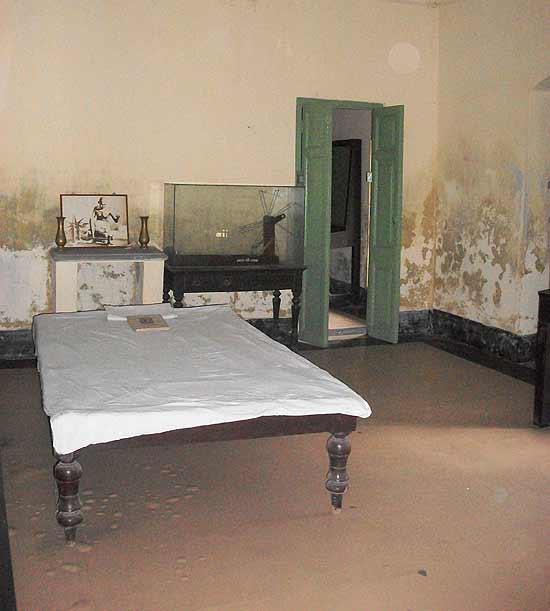 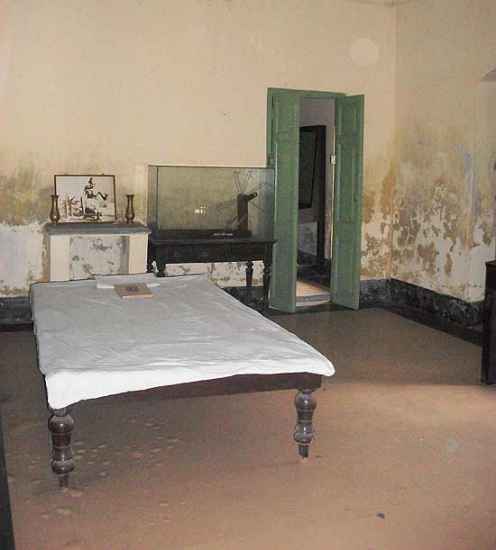 The whims of obscurity have blown unsparingly upon Khadi Pratisthan, Mahatma Gandhi’s ashram at Sodepur, a little to the north of Calcutta, in the North 24 Parganas district of West Bengal. It’s an ashram that enjoyed emphatic prominence during the Mahatma’s lifetime, in fact, one which he seemed to have preferred over the Sabarmati ashram in Ahmedabad. As Gandhian scholar Tridip Suhrud has pointed out, Gandhi founded the Sabarmati ashram near a cremation ground on the bank of the river to assert his love for outcastes. But frustrated with the attitude of upper-caste Gujarati society, he never set foot there after 1931. In contrast, he visited Sodepur—which he in fact called his second home—a number of times between 1938 and 1947, the most turbulent and decisive phase of the independence movement.

The ashram was built in 1921 by Satish Chandra Dasgupta, who quit his job at Bengal Chemicals, enthused by Gandhian philosophy and nationalist fervour. In 1939, the ashram was witness to a historic meeting between Gandhi, Jawaharlal Nehru and Subhash Bose, after the March session of the Tripuri Congress. Barun Dasgupta, Satish Chandra’s nephew, has a boyhood memory of Nehru and Bose having an animated discussion outside the room adjacent to Gandhi’s. When Gandhi passed them by after a visit to the bathroom, he said, “You, my old enemies, follow me everywhere”, making them both smile. Soon after, Bose was forced to resign as Congress president, owing to severe differences with Gandhi. Bose may have felt the sting in that remark was reserved for him alone.

Gandhi’s most significant visit to the Sodepur ashram was in October 1946. The failure of the Gandhi-Jinnah talks and Jinnah’s rejection of the Rajaji formula (between July and October 1944) was followed by the Muslim League launching its infamous Direct Action Day for the creation of Pakistan on August 16, 1946. Under the shadowy supervision of the League’s chief minister in Bengal, H.S. Suhrawardy, riots were allowed to spread across  Calcutta. The most violent repercussion was witnessed in the overwhelmingly Muslim district of Noakhali, in East Bengal, where a one-sided onslaught started on October 10, the day of Lakshmi puja. Hearing of the massacres, Gandhi telegrammed Satish Chandra, instructing him to send volunteers to Noakhali and report on the ground situation.

Gandhi himself arrived at the ashram, duly noted by Nirmal Kumar Bose in his diary, at 5.30 pm on October 29. In the presence of Prafulla Chandra Ghosh, later the first CM of West Bengal, and others, Gandhi listened to the details of the riots from ordinary people who had flocked to visit him. The very next day, as he was returning from meeting the governor, Sir Frederick Burrows, an iron ring was hurled at Gandhi’s car. Though no one was hurt, the incident reveals the prevailing temper. On November 6, with a restricted, self-imposed diet as a means of penance, Gandhi left Sodepur for Noakhali. 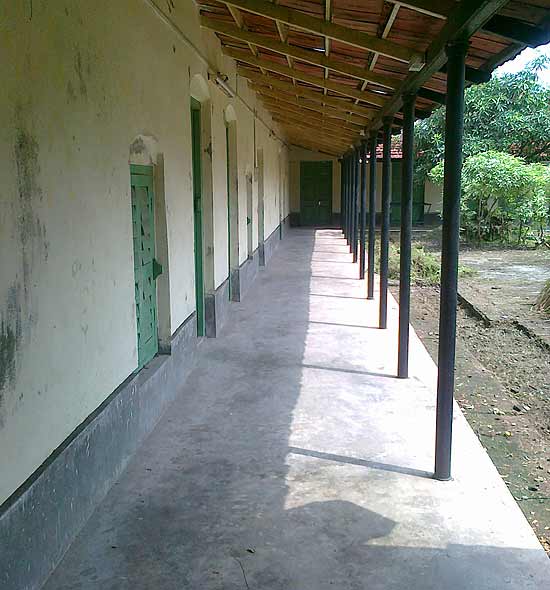 “You, my old enemies, follow me everywhere.” Nehru and Bose smiled. But Bose must have felt the sting.

Midway, in Kazirkhil, Gandhi drafted a note for Satish Dasgupta. Words of touching clarity, even vulnerability. “I find myself in the midst of exaggeration and falsity. I am unable to discover the truth. There is terrible mutual distrust. The oldest friendships have snapped. Trust and ahimsa, by which I swear and which have to my knowledge sustained me for 60 years, seem to fail.” Evidently, Gandhi had arrived without any thought of doing politics but to find out the state of politics. He had declared in Srirampur, “I have not come to East Bengal to hold an enquiry.” Despite the odds against him, Gandhi took trustful steps in the middle of the muck. He supported the Bengal government’s initiative to form a peace committee. When Manoranjan Chaudhuri, a Hindu Mahasabha leader, suggested arrests as a precedent to the formation of a peace committee, Gandhi told him it would be wise to place trust in the ministry. In his speech at the prayer meeting in Chandipur, Gandhi told the largely Hindu audience that though they had been deceived before by assurances from the state government, it was “beneath one’s dignity to distrust a man’s word without sufficient reason. If all Muslims were liars, Islam could not have been a true religion”. Gandhi here apparently collapses state authority and its communal identity. But since he never absolved the state government of its responsibility, what he did in this instance was to convince Hindus that the state authorities of Bengal shouldn't be blamed merely in their capacity as Muslims. It was a deliberate move to recover the ethical credibility of the community against the perils of a modern institution. To stand up for Muslims in the thick of violence against Hindus was a brave act, possible only for a man who chose to represent not any community but their relations with each other. It brought Gandhi right in the middle of a risky centre as much as it marginalised him, for violent sentiments were growing on both sides of the divide.

It made Gandhi confess his “technique of non-violence was on trial” in Noakhali; the possibility of failure haunted him. In the despondent atmosphere at the ashram, Gandhi shared his anxiety with a Muslim friend, saying: “If necessary I will die here. But I will not acquiesce to failure.” Gandhi realised his ethical battle against the politics of murder had to acknowledge the possibility of death. Against the successful himsa of history, Gandhi preferred to risk the failure of his unfailing regard for ahimsa. To non-violently expose oneself against the violence of history was Gandhi’s ethical opposition to that history.

As I walked through the terracotta-roofed corridor of the Sodepur ashram, I thought of the man who believed in countering violence by walking miles on foot, carrying his foldable charkha, spinning, fasting, listening and writing. A foldable charkha inside a glass case and Gandhi’s bed covered in white are part of the ashram’s relics. Many other items, including photographs, have been shifted to the Gandhi museum at Barrackpore. The caretaker, Chetan Ravi Vyas, with memories pouring out of his eyes, told me about his association with Satish Chandra’s son, Arun. Vyas has been in the ashram for the last 45 years. Arun, he said, was a Kali devotee and worshipped her idol in the ashram. I found the introduction of such a cult in the ashram a bizarre departure from Gandhian principles. But Vyas insisted it was a matter of “bhakti”. I asked him why he became a follower of Gandhi. He replied, “I am a Harijan and he loved and embraced us.” He also spoke of Gandhi opening a school for Harijan children in his village, Raj Dhanvar. His daughter, Baby, was among the few other women inmates of the ashram, working on charkhas to produce khadi goods. The production of most khadi products was stopped after 2001, though saris and carpets were made till 2008. A statue of Gandhi was erected in the front lawn in 2002. The uneven story of the ashram’s productions seems mired in small controversies. I asked both Vyas and his daughter if they knew that the word ‘Dalit’ is preferred these days over ‘Harijan’. Both hadn’t heard the word. I asked if they knew of Dr B.R. Ambedkar. Again they shook their heads. These are Dalits outside the regime of political consciousness. Their selves nevertheless found respite and respect in obscure neighbourhoods because Gandhi invented and conferred on them a spiritually elevated identity. The figure of the ‘Harijan’, though politically obsolete, persists in certain lifeworlds.

I wished the closed rooms of the ashram were open, so I could hear the echoes of its hollow interiors. But I had to be contented with the shadows in the corridors. I wondered if Gandhi’s experiment against communal violence was meant to be a critique of the modern notion of time: acts of spinning and simple, manual labour were ways of channelising one’s body into a mode of practice which was neither competitive, accumulative nor aggressive. Gandhi’s idea of the ashram, in that sense, was an experiment to tackle modernity and its pervasive social imaginaries by occupying an in-between place, neither bourgeois family nor revolutionary commune, neither sect nor party. It was also a space to erase prejudices of caste and manual scavenging.

The ashram appears to have been completely sidelined amidst the daily preoccupations of the town. But the sight of workers clearing off the high grass, as the ashram prepared to celebrate October 2, offered the refreshing prospect of continuity against the haunting absence of Gandhi’s austere, transformative politics. The empty, locked rooms, too, seem to be waiting for the women inmates to reappear and spin the charkhas back to life.

A shorter version of this article appears in print

A Zone Of Vacillation