Watch this one, but do not go in expecting a Kurosawa 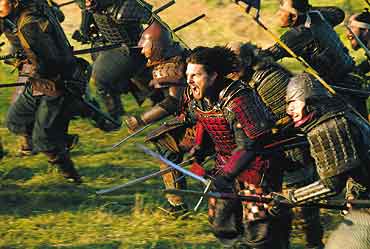 Set in 1876 Japan, Edward Zwick's The Last Samurai is a tale of tradition pitted against alien western values. As the country launched on a policy of aggressive westernisation, the Samurai warrior race—the centuries-old bastion of power—were the hardest hit. They had to fight to restore their honour. The film is neither original nor ingenious and borrows its plot from Kevin Costner's Dances With Wolves; the only exception—Costner's Red Indians become Cruise's Samurai. The battle sequences are reminiscent of Zwick's 1989 film Glory, where a few black soldiers take on a greater enemy. And yet, the film manages to hold its own and even move you.

Cruise plays Nathan Algren, a fallen Civil War veteran who is recruited to train the imperial army. His 'peasant-turned-soldiers' army is badly defeated in a Samurai revolt. But Cruise's brave fight catches the eye of enemy leader Katsumoto (played by Ken Watanabe) who spares his life but holds him captive instead. Once in the Samurai village, Katsumoto's sister Taka (whose husband Cruise had killed in the war) nurses him back to full health. In the days that follow, Cruise gradually begins to respect all things Samurai and eventually adapts to their lifestyle and language. When the imperial army attacks, Cruise fights on their side.

In the climax battle sequence, a crossbow-armed Samurai army stands up valiantly against a howitzer fusillade. The battle scenes, especially the sword combat sequences, are impressive. The film glorifies the Samurai way of life where honour and bravery precede all, to the extent that a defeated Samurai takes his own life to rid himself of dishonour. Katsumoto's son's exceptional self-sacrificing act of bravery is moving. And the romance between Taka and Cruise remains subdued, in keeping with the sacrosanct sentiment of honour and redemption.

The film works on two levels. First, a taut script, good production value and gripping narrative keeps you interested throughout. Second, the film successfully handles a running undercurrent of individual guilt through Cruise's character who redeems himself of the sins of a past war. Four Oscar nominations, decent performance by Ken Watanabe who enjoys his "combersations" with a better-than-usual Cruise. Watch this one, but don't go in expecting a Kurosawa.