Home  »  Magazine  »  National  » pakistan: espionage »  The Lady With The Grouses

The Lady With The Grouses

Madhuri Gupta, caught spying for Pakistan, comes out as complex in her ordinariness 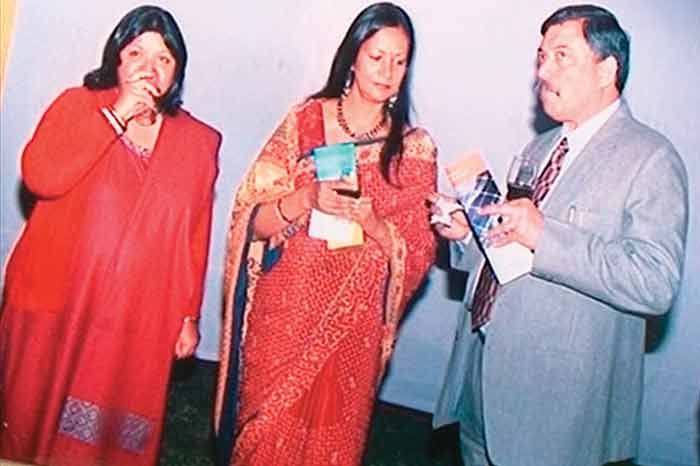 Indian diplomat Madhuri Gupta is no Mata Hari, the legendary Dutch exotic dancer and courtesan whom the French executed during World War I for espionage. Unlike Mata Hari, however, Madhuri wasn’t employing irresistible beauty or seductive charm to ferret out secrets from powerful men. On the other hand, she was supplying information from the Indian High Commission in Islamabad to a Pakistani who has been variously described as her friend, lover and, most certainly, intelligence handler.

She taunted those arresting her, asking, ‘What took you so long to get me?’ She showed no remorse.

The Madhuri myth is expected to grow, not only because, through her, Pakistani intelligence breached the impregnable secrecy erected around the high commission in Islamabad, but also because of what she is. Single, 53, a heavy-set Indian Foreign Service-B officer. One could say she doesn’t quite match every man’s idea of beauty. In the ministry of external affairs (MEA), she was known to many as a scholar of Urdu literature. They say she has a certain intellectual acuity, demonstrates keen interest in Sufism and had begun doctoral work on Jalaluddin Rumi, the Persian Sufi poet. For reasons not very clear, Madhuri could not complete her PhD. Perhaps it was her personal or family problems—her mother, for example, was seriously ill—or because the MEA wasn’t willing to extend her the privilege of paid leave for an academic pursuit not relevant to her job.

Such intellectual inclination—to hazard a guess—could have made Madhuri find her job of second secretary in the press & publicity division of the high commission rather humdrum. Could this have been an element in the factors that spurred her to seek the dash and excitement of spying? Could it have been that her academic pursuits created in her a feeling of superiority, making her resentful of IFS officers she found overbearing? Maybe it was denial of paid leave that brought out all the bitterness suppurating within her, driving her to turn against the system. During interrogation, Madhuri did touch upon some of these strands.

But she’s neither repentant nor crestfallen at being caught. The depth of her bitterness and the superior air she sports were on display when she was arrested last week in Delhi, summoned ostensibly to assist in handling the media for the SAARC summit in Bhutan. “What took you so long to get me?” she mocked. The discovery that she was spying didn’t surprise some officials in the MEA: they say they had frequently found her overstepping her brief, her own pumped-up self-esteem pushing her to punch beyond her weight. But most Indian diplomats she served with rated her a “very good worker”.

When Madhuri joined the MEA as an assistant in the early 1980s, she tried to swing a posting to Moscow, courtesy an IFS officer who was said to be her ‘mentor’ in those days. This officer was keen on having Madhuri transferred to Moscow, where he, too, had been deputed. But the MEA did not oblige, primarily because Madhuri had been working in the Soviet Information Centre before joining the service.

In the 1990s, she did a stint in the Indian embassy in Baghdad. A retired Indian diplomat who was in charge of the Indian mission in Baghdad then told Outlook, “There was nothing negative nor positive about her work that I can recall. Moreover, Iraq was under UN sanctions then and there was little to do other than keep our flag flying.” But Madhuri was busy networking, in the process becoming quite friendly with a young Sikh working for the UN in Baghdad. This friend is said to have swung for Madhuri the job of a “volunteer” in the UN mission in Kosovo later.

On return to India, Madhuri was assigned to the external publicity division of the MEA, where she was an assistant editor at Indian Perspective, a publication of the MEA. A senior diplomat who worked with her then and knew her in her official capacity says, “She was quite good at her work, was also known as an articulate person who could hold her own on many subjects.”

This view is echoed by another senior diplomat who in his stint at the Indian Council of World Affairs (ICWA) played a role in recruiting her as an Urdu expert. The ministry had, in fact, recommended her name, and during the interview, she impressed her bosses with her command and knowledge of Urdu. She also showed them some of her works published by prestigious Urdu journals. “I was quite impressed with her work,” said the diplomat. “Not only did she show care and diligence before putting up any important paper, she also spoke of her keenness to complete a PhD on Sufism.”

It was at the ICWA that Madhuri began to falter at work. There were persistent rumours about her affair with a married man. This liaison assumed embarrassing proportions as senior officials began to receive letters of complaint from the estranged wife of the man who was allegedly in a relationship with Madhuri. The wife accused Madhuri of wrecking her marriage. It was around this time that Madhuri began to skip office, citing her mother’s illness and the mental stress of “hard work” at the ICWA as reasons for her prolonged absences. “This was the time her work became erratic. We realised there is an eccentric element in her character,” says the diplomat. 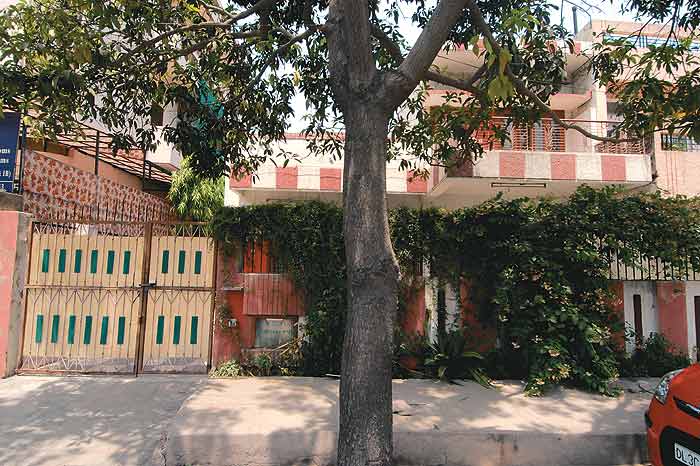 Her neighbours in Vikas Puri, west Delhi, where she has a house built by her parents, say her mother indeed died around the time Gupta was at the ICWA. They say Madhuri kept aloof, thwarting polite overtures or neighbourly exchanges. Perhaps she is a quintessential loner. Her only sibling, a brother, is a successful businessman in the US. He is said to have given up his share in the Vikas Puri house, which would command a high price, located as it is on the main thoroughfare.

The media portrayal of a desperate Madhuri seeking wealth isn’t, therefore, accurate; nor is the loner image neighbours paint her in. At ICWA receptions, Madhuri was said to be chatty, mixing around with the ease of cosmopolitan upbringing. She was fond of smoking and drinking, and had more than few pinches of gutka daily.

After a stint in Malaysia, she returned and lobbied for a post in the Indian High Commission in Islamabad. She was sent there mainly because of her knowledge of Urdu, and was initially given the task of translation and making assessments of reports in the Pakistani media. Within six months of posting there, however, she was put under the scanner. The ISI, known to target single women, zeroed in on Madhuri when she publicly voiced her resentment against IFS officials and the MEA at a high commission function. A charming ISI agent known by the name of Rana befriended her, exploiting her deep dislike of her bosses and the system.

Sources say Madhuri’s first act of indiscretion was to let on to Rana that her boss, R.K. Sharma, who headed the press division, was not from the IFS but was in fact station chief in Islamabad of R&AW, India’s external spy agency. Once Sharma became aware that his cover was blown, presumably after being snitched on by Indian moles in the Pakistani establishment, he lodged a complaint against Madhuri with his R&AW bosses in Delhi. Madhuri was immediately put under surveillance.

This was intensified when she began to take interest in matters not within the ambit of her brief. On one occasion, it was noted that she was keen to find out the domestic impact of the Sharm el-Sheikh talks between Prime Minister Manmohan Singh and his Pakistani counterpart Yusuf Gilani. Since Balochistan was included in the joint statement issued in the Egyptian resort, and was also hailed as Islamabad’s triumph, Madhuri’s snooping was perceived to have a definite design. She also asked probing questions about whether or not New Delhi would accede to Pakistan’s demand for composite dialogue.

It was then that R&AW decided to rope in the Intelligence Bureau (IB), and one of its senior officials in South Block was assigned the task of widening the surveillance on Madhuri. Sources say the Indian high commissioner in Islamabad, Sharad Sabharwal, is miffed that he was kept out of the loop for the better part of the surveillance, and ultimately arrest, of Madhuri.

At a crucial juncture, it was decided to subject Madhuri to a ‘litmus test’ to establish her betrayal beyond doubt. She was made the exclusive recipient of spurious information, and once it was confirmed that the Pakistanis were privy to this information, it was decided to bring Madhuri back to India. But this too required a ruse—a sudden recall could have aroused the suspicion of her Pakistani handlers, who may then have engineered her defection. The Indian sleuths waited for an opportune moment. The SAARC summit in Thimpu provided a plausible pretext to summon her to Delhi for assistance in handling the media. She’s said to have been arrested at the airport, though her neighbours claim to have seen her a few days ago.

It is believed Madhuri didn’t pass on extremely sensitive information to the Pakistanis. That is perhaps the reason she has till  now been charged with violating only the Official Secrets Act and not the more stringent National Security Act. The other reason could be that, despite the allegations against her, it might be difficult to prove in court that she was spying for Pakistan. There are, after all, many instances of Indian officials charged with espionage getting acquittals in court.

All that is for the future. For the moment, though, the MEA and the various wings of Indian intelligence are trying to assess the severity of Pakistani espionage’s breach into the Indian high commission in Islamabad and elsewhere. Later, they should perhaps try to fathom what motivates some people to betray their country.

No Liberties With Our Liberty