The Lady Has Arrived 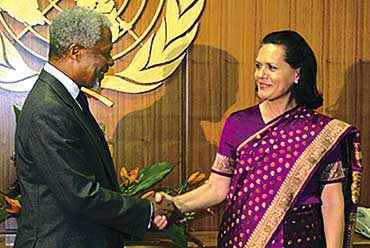 outlookindia.com
-0001-11-30T00:00:00+0553
In a land where foreigners play a crucial role in priming the economy, and where Indians are as foreign as Sonia is to India, the Congress party president and leader of the Opposition didn't find her Italian lineage an insurmountable hurdle in reaching out to the Americans—and impressing them. Sonia's US visit has brought her recognition in and out of the Bush administration as an accomplished leader who has what it takes to become the prime minister of the largest democracy.

What was remarkable about Sonia's public speeches was that she was extremely natural. As she stood before the mike dressed in a sari, reading well-crafted speeches with care and answering the media's questions, the Americans readily accepted Sonia as an Indian leader who has made it to the big league. Her modulated tones made it easy for the audience to understand her. For once, her accent wasn't a hindrance.

Says former ambassador Dennis Kux, currently a senior scholar at the Woodrow Wilson Center: "What is striking is that for the first time, a leader of the Opposition in India has received so much attention from so many of our key leaders. It marks acceptance of Indian democracy; it also underscores that India has a functioning two-party system, Indian-style.... Her visit accentuated the fact that there is a broad consensus in India on economic policy and on dealing with the US. That is very befitting."

Sonia's itinerary indicated the distance Indo-American relations have traversed since Bill Clinton visited India. Her trip to Washington included a lunch with the India caucus in the Congress (which has a membership strength of about 106), meetings with Vice-President Richard Cheney, Deputy Secretary of State Richard Armitage and National Security Advisor Dr Condoleeza Rice. The parleys vividly demonstrated the respect Indian democracy has earned in the world's oldest one.

Kux's tributes to Sonia were echoed by the two co-chairmen of the India caucus, Democrat Jim McDermott and Republican Ed Royce. It is indeed remarkable how, with Indian goodwill taken for granted in the US, it is possible for an Indian leader to speak frankly without being misunderstood as being hostile. For instance, when Sonia said that while countries like India are treading the path towards globalisation and free trade, the US and other industrial nations are going protectionist, it was taken as valid criticism in the Indian context. The thinking was that she spoke sincerely, something they could respect.

Sonia charmed New York too. Besides addressing the United Nations on hiv/aids, she addressed the Council on Foreign Relations at the Asia Society. Of her speech, former ambassador Frank Wisner says: "(She) underscored the commitment of the Congress party to reform the Indian economy. The strongest... portion of the speech was that India is a land undergoing profound change.... Mrs Gandhi spoke forcefully and convincingly, with self-confidence." "Her speech," says Ashutosh Varshney, director, Center for South Asian Studies at the University of Michigan, "was very appropriate for the occasion. She didn't criticise the ruling coalition and said she was fully behind the government's peace initiative on Pakistan."

Sonia herself looked relaxed on the trip and showed she had her wits about her. When an ebullient R.P. Goenka, MP, introduced her to a Washington audience as 'prime minister-in-waiting', she, in response to a correspondent's subsequent query, smiled and quipped: "There is no vacancy in that office."

Oratory didn't emerge as one of Sonia's strong points. Even her UN speech, which most activists found convincing, was found lacking in delivery style, crucial to engage an audience. Say Dr Indira Kapoor of the International Planned Parenthood Federation, South Asia Region: "She could've practised reading her speech a couple of more times.... But then her mother tongue isn't English; you can give her that much benefit."

Others thought oratory was not necessarily a hallmark of an efficient leader. Many Americans compared her to their own leader George W. Bush who, though a poor orator, has surrounded himself with capable people. Both Bush and Sonia, it seemed to some analysts, are in the category of leaders who are so confident of themselves—unlike those who are apprehensive of being outshone—that they are not afraid of attracting talented personalities to serve under their leadership.

What was clearly underlined in Sonia's speeches was her effort to evolve national consensus on a host of issues. She recognised, for instance, that India's problems cannot be addressed in the absence of an annual 7-8 per cent rate of growth, a growth that has to take place in an environment of fiscal discipline. She also acknowledged that growth alone will be insufficient to root out poverty. "We will still need improved governance and substantial public expenditure on anti-poverty, employment guarantee and social welfare programmes," she said.

It came as a great relief to the captains of American commerce and industry that she swears by the need to sustain economic reforms even when she preaches mixed economy. Her criticism of Western protectionism against developing nations was sharp but not sharper than what comes from many international organisations and by other leaders of the developing world.

Unlike A.B. Vajpayee, who had unleashed a storm through his swayamsevak speech in the US last year, Sonia desisted from naming parties even though she espoused her party's ideology. At a reception of the Indian National Overseas Congress (inoc) in New York, at whose invitation she visited the US, Sonia spoke of the need to uphold secular values. Says inoc general-secretary George Abraham: "She talked about maintaining secularism in India. She said that it has been our culture for so many years and nobody should change that.... But she did not name any parties. It is a conscious attempt to only emphasise the positive."

Sonia's trip mirrored the changes in the Indo-US relationship. And though this could be due to innumerable factors—India's growing economic importance, the problems US has and expects to have with China and the danger of the Talibanisation even of Pakistan—equally true is that Americans have discovered that India is not a hostile nation.That sentiment, Americans are glad, is reciprocated not only by the Vajpayee government but also by the leader of the Opposition, who, in a democracy, is always a 'prime minister-in-waiting'.

And Arun Venugopal in New York