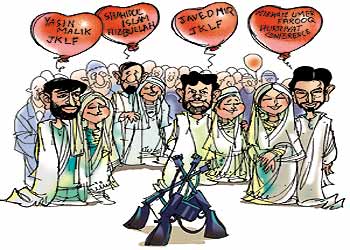 outlookindia.com
-0001-11-30T00:00:00+0553
Five years ago, they would have told you that they were wedded, but only to the cause. Today, call it a sign of peace returning to Kashmir or love blooming in the Valley but at least four separatist leaders have decided to take the plunge and bid adieu to bachelordom this summer. Leading the pack of bridegrooms-in-waiting are former Hurriyat Conference chairman and the youthful Mirwaiz Umer Farooq, Yasin Malik, chairman of the Jammu & Kashmir Liberation Front (jklf), its senior leader Javed Mir and Shahidul Islam, the erstwhile chief commander of the once-formidable militant outfit, Hizbullah.

The soft-spoken, suave and handsome Mirwaiz got formally engaged last month to a girl of Kashmiri origin whose family is now settled in Buffalo City, US. The bride is said to be a religious scholar and a student of Islamic studies. Though details are not forthcoming, people close to the family say that Umer saw his fiancee a few years back in New York, when he first went to the US to attend the Organisation of Islamic Countries summit as chairman of the Hurriyat Conference. The girl readily agreed to the marriage proposal, mooted by some mutual friends. On his return to Kashmir, Umer shared the secret with his mother and other family elders who gave their approval and thus the final decision was taken.

The 'nikah' ceremony of the Mirwaiz was performed on June 17 in Srinagar by well-known Islamic scholar Maulana Anzar Shah Kashmir, who specially flew in from Deoband in Uttar Pradesh for the purpose. Strictly a private family affair, only very close relatives from the two families attended the ceremony. The formal ceremony is scheduled for late August or early September.

Javed Mir, one of the four founding commanders of the jklf, is getting married in mid-July to Menu, a Srinagar lawyer. For Javed, who was the jklf chief commander when militancy in Kashmir was at its peak, it was love at first sight. According to his close friends, Javed first saw his wife-to-be five years ago and decided pretty much on the spot to marry the girl.

The marriage is slated for July 22-23 and if one goes by the invitee list, it's to be a big do. Javed plans to invite nearly every big name in politics, journalism and the like, from India and Pakistan. "I want to make the occasion a meeting place for the people living on either side of the 'khooni lakeer' (a reference to the Line of Control) and hope New Delhi will grant visas to my guests," he says.

Javed views his forthcoming nuptials as an opportunity for bridge-building as well. Says he: "I want to invite Pakistan's ruler Pervez Musharraf and Prime Minister Atal Behari Vajpayee too to the marriage. Musharraf is arriving in Delhi in mid-July and I wish he stays for a few more days and visits Kashmir in the company of Vajpayee and sees for himself how best a solution can be found to the problem between the two countries."

Also bitten by the marriage bug is Shahidul Islam, once chief commander of the pro-Pakistan Hizbullah and now a close aide of the Mirwaiz. Shahid (real name Aftab Hilali) is a law graduate and was president of the Kashmir University students union in late '80s. Like Javed, it was love at first sight on meeting his dream girl, a student of political science at his old haunt, Kashmir University. His marriage is due to take place sometime in September.

Another applicant to the married men's club is Yasin Malik. Yasin hasn't been keeping well for a long time, having undergone open-heart surgery way back in 1992 when he was still under detention. Presently in London, Yasin is said to have been approached with marriage proposals and is said to be considering a few of them. However, Yasin, say his close friends here, does not want to take any decision till he consults his family on starting one of his own. Till then, then, he will be the last high-profile bachelor boy in the Valley.