Vajpayee's strategic core, to fight a protracted war against the swadeshi brigade, is finally in place 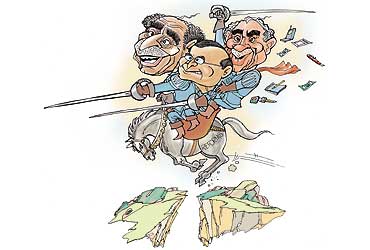 outlookindia.com
-0001-11-30T00:00:00+0553
Three men with a pro-reforms image now head important ministries. With the recent reshuffle, it seems that PM Atal Behari Vajpayee will influence the immediate future of India's economic reforms. Arun Shourie, his blue-eyed man, now controls disinvestment, telecom and IT, three areas where the presence of a pro-reforms minister is critical. Jaswant Singh, his staunch supporter, was already the finance minister; his job is to somehow balance the pressures of wooing back the estranged middle class and ensuring fiscal discipline in this year's budget. The entry of Arun Jaitley, who's close to L.K. Advani, into commerce and industry signifies that a legal brain will now tackle the controversial and tricky WTO-related issues.

Well, it doesn't matter now that the trio itself was fighting to wrangle each other's portfolios. Jaitley was interested in telecom and IT as he was not keen to return to his earlier ministry (law & justice) but lost out a few hours before the swearing-in ceremony last Wednesday. Jaswant was keen to take additional charge of disinvestment but was prevented by Shourie's manoeuverings. And Shourie was on his way out of the disinvestment ministry but managed to retain it; as a bonus, he got another plum portfolio. But the fact is that these are three ministers who are convinced about reforms. In the recent past, Jaitley and Jaswant have supported Shourie's aggressive moves to block opposition against the sale of oil PSUs and increase the pace of privatisation in general.

However, things are not likely to be smooth for the three musketeers. There could still be a few obstacles which they would need to clear. These are issues that are being heatedly debated in corporate boardrooms, by the public and even the international community. How the ministers counter them will decide the fate of economic reforms, the revival of market sentiment and what India's gdp growth this year will be. We present a realistic picture of how policies are likely to be shaped over the next 12 months.

Will privatisation proceed at a faster pace?
"If everything goes smoothly, the two oil PSU transactions (HPCL and BPCL) should be completed within six months," says an elated official in the disinvestment ministry. In fact, Shourie's key men are setting new deadlines for other PSUs too. The sale of the State Trading Corporation and Engineers India Ltd in the next three months, Maruti's ipo in the same period, NALCO by year-end. With Shourie getting telecom, the merger between MTNL and BSNL, pushed by the former minister Pramod Mahajan to stall their privatisation, is a closed chapter. Instead, a strategic sale of MTNL is on the cards. As the official quoted earlier says, "Let's see who stops us from selling MTNL now." The ministry is also considering a proposal to sell a minority stake in BSNL.

Let's face it, things look good for Shourie with Jaswant on his side and Jaitley helping him deal with legal obstacles that can delay the sale of oil PSUs. But things can go wrong. First, what if the US attacks Iraq in the next two months? The war may push oil prices up, which will impact the global firms which are unable to pass on the burden to the consumers. Thus pushed for cash, there could be a lowering of interest among foreign investors in Indian oil PSUs. The US-Iraq stand-off will also enable the anti-divestment camp, especially petroleum minister Ram Naik, to argue that the turbulence in the oil market is an important reason to look at the issue of the country's oil security. So, he might add, the privatisation of oil PSUs is a bad idea.

Naik's plea may be boosted by political considerations. BJP sources contend that though both the PM and his deputy want to proceed with disinvestment, they feel that going too fast may jeopardise the BJPs chances in the coming state polls.So, they want Shourie to postpone the final decisions until November, when it is all over. "Disinvestments are complex processes where governments need to give due consideration to a number of constituencies before deciding how to move forward. Once the decision has been taken, it's important for the timetable to be clear, realistic and observed by all," says Philip Jackson, managing director (Asia Pacific), JP Morgan.

Other operational factors can also derail Shourie's plans. Take the case of NALCO, where the cabinet has been unable to take a decision of when to do a strategic sale after the company's proposed issues, both domestically and globally. Says a Mumbai-based merchant banker handling a few disinvestment cases, "The government has to give a clear indication in its documents, or else it could face flak from global regulators and investors." Even in the case of Maruti, the ipo has been delayed by the government's insistence that the issue should be fully underwritten, a clause no merchant banker wants to accept. And then, a bear hammering of the oil PSU scrips could lead to criticism that the government is selling its crown jewels for a song.

Will Jaitley's skills help in WTO negotiations?
Over the next two years, India needs to put in place crucial laws to adhere to its WTO commitments. These include a new product patents regime, being opposed by ngos, health specialists and a segment of the industry. Also in queue is the controversial Biodiversity Bill pending in Parliament. It will require a legal brain to counter criticisms against the proposed legislation and build a consensus on these issues, be it among the Opposition parties or other vested interests. Similarly, one will require a minister who understands legalese to address India's concerns during WTO negotiations. In this sense, Jaitley—and his two cabinet colleagues—seem to be the right people in the right place at the right time.

Can Shourie resolve tricky telecom issues?
From the way the industry is celebrating, it seems so. At one end of the telecom spectrum is the cellular segment, which views Mahajan's removal "as a positive development". A senior manager in a cellular firm, who could hardly conceal the sense of joy after hearing about Shourie's appointment, said he "looked forward to working with the new minister". Clearly, cellcos expect Shourie to give them a patient hearing. The fact that Shourie is interested in details implies that he won't get bogged down by complex issues. Says another manager, "We don't expect him to resort to slogan-shouting or forming opinions based on one-page notes."

Going by Shourie's initial statements, it seems that he wants to create a level playing field between cellcos and the operators of the competing technology, wll. While acknowledging that he is not in favour of preventing the entry of new technology (read wll), he added that he doesn't prefer "predatory tactics" that will adversely impact some companies. The latter comment means that he wants an end to the ongoing price war between operators. Well, that's good news for cellular firms. But one must also remember that Shourie is believed to be sympathetic towards a few wll operators. On the balance, he is unlikely to take sides.

He is also likely to make his ministry more transparent. That may lead to changes in the workings of the trai whose credibility, according to the industry, is at its lowest. M.S. Verma, the trai chairman, was embroiled in several controversies and many allegations were hurled at him by various players. His tenure ends next month and, therefore, Shourie will have the flexibility of choosing someone who, says a telecom specialist, "is powerful, independent and understands the crucial issues". So, will Shourie be a good minister? Quips an industry top honcho, "If Ram Vilas Paswan and Sukh Ram can be considered good for this job, Shourie will be better."