The King And Us 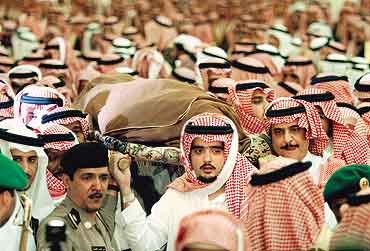 outlookindia.com
-0001-11-30T00:00:00+0553
When the king of Saudi Arabia, Fahd bin Abdul Aziz, died on August 1, the ministry of external affairs had wanted President A.P.J. Abdul Kalam to attend his funeral. For reasons best known to the government, the mea's suggestion wasn't accepted. Instead, at the funeral India was represented by Union minister for power P.M. Sayeed, who must have been lost in a crowd of world leaders gathered in Riyadh. Present there were French President Jacques Chirac, United States vice-president Dick Cheney, former US president George Bush Sr and Prince Charles from the United Kingdom.

Shouldn't the Indian president have attended the funeral in Riyadh? A source agreed, "If we are to do our arithmetic and assign a weightage to Saudi Arabia, then it should be said that it is more important to us than the rest of the Gulf Cooperation Countries put together." Indeed, Saudi Arabia is India's biggest supplier of oil (accounting for over 25 per cent of India's crude imports), the number one destination for the Indian workforce abroad (about 1.5 million Indians remit US $4 billion annually), the biggest pilgrimage centre outside India (1,00,000 Indians perform Haj every year, and another 50-75,000 the umrah—a visit to Mecca when the Haj isn't on). It is also our biggest trading partner in the Gulf, accounting for nearly 30 per cent of the total trade.

President Kalam's presence would have been appropriate because of precedents. At the funeral of King Faisal of Saudi Arabia in 1975, the Indian delegation was led by then president Fakhruddin Ali Ahmed. When Sheikh Zayed bin Sultan al-Nahayan, president of the United Arab Emirates, passed away last year, his funeral was attended by President Kalam. He led the Indian delegation of minister of state for external affairs E. Ahamed, minister of state in the Prime Minister's Office Prithiviraj Chauhan and senior South Block officials. Asks a diplomatic source: "If we could send our President to the UAE, why not to Saudi Arabia?"

India's poor representation in Riyadh last week could irk Saudi Arabia. Diplomats recall an incident of November 1997. On a visit to that country, then minister of state for foreign affairs Salim Sherwani was asked by Crown Prince Abdullah: "Why has India forgotten us?" Abdullah is now Saudi Arabia's king.

Last week was indeed India's chance of demonstrating its gratitude to King Fahd for bailing us out in August 1990. Then Iraqi president Saddam Hussein had invaded Kuwait, and the oil supplies were threatened with disruption because of the gathering war clouds. Till then the bulk of India's oil requirement was met by Iraq and Kuwait. To forage for oil, India sent a special envoy, Arif Mohammed Khan, to Jeddah, days after Saddam's invasion of Kuwait. It was a delicate mission as Saudi Arabia was angry with Saddam, and India was reluctant to publicly offend him because of the Indians stuck in Iraq and Kuwait. Barely had Khan sat down, minister Hisham Nader declared, "I have been authorised by His Majesty (King Fahd) to inform you that Saudi Arabia will meet all of your requirements."

Diplomats also lambast India's policy of sending "tired old Muslims to vegetate" as ambassadors to Riyadh. The last ambassador there, Kamaluddin Ahmed, could be best described as "non-functional". He had to resign after the NDA was voted out. Instead of posting a seasoned diplomat, the UPA government appointed M.O.H. Farook who, sources say, has largely confined himself to his residence due to bad health. Appointing such old men reflects poorly on the importance New Delhi attaches to Saudi Arabia.