The King And His Realm

Dhirubhai Ambani, maverick tycoon, will leave behind in Reliance a business empire even bigger than him 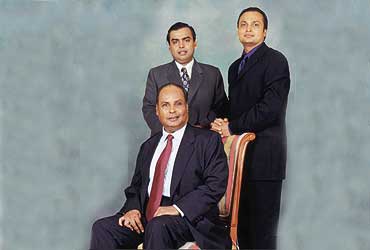 outlookindia.com
-0001-11-30T00:00:00+0553
The news spread like wildfire, and within hours, as India's most successful businessman fought for his life, Mumbai's Breach Candy Hospital became a gathering ground of the who's who of the country. Politicians, industrialists, film stars—it seemed as if there was no one whose life Dhirubhai Hirachand Ambani had not touched. Perhaps the greatest tribute to the man was paid by a businessman who has known him closely. "If the doctors can just get him back to his senses, Dhirubhai will pull through," he said. "We have faith in his willpower."

Willpower is something the boy from Chorwad village in Gujarat, who set off for Aden at the age of 17 to seek his fortune and ended up creating a Rs 60,000 crore group, India's largest business house, has in abundance. Venilal Estates Building, 3A, in Mumbai's congested Bhuleshwar, remains the nondescript five-storey chawl—surrounded by saree shops and handcart vendors—that it was in the '60s when the seven-member Ambani clan lived there with a family friend in a tiny one-bedroom flat. The Ambanis moved on. Says elderly Ramchandra Belgaonkar, a tax consultant who lived next door: "They slept on the floor and had no telephone or car...like the rest of us." Anil Ambani was born here.

The Jariwala family's residence was one floor above, and they were among Dhirubhai's first business contacts in the city. "My father had business dealings with Dhirubhai," says Rashmi Jariwala. "We used to import nylon yarn from Europe and Dhirubhai would sell it in the domestic market. But after India started producing the yarn domestically, our business suffered. By then, Dhirubhai had moved on to bigger things. And he's always thought big."

Recollects old-time friend and Congress MP Murli Deora: "We would come to Delhi together on the morning flight and return the same night, taking the cheaper Dakota flight. We saved Rs 120 on airfare and hotel charges. We had an arrangement with Ashoka Hotel—by paying Rs 25 we could keep our briefcases and get messages." It was a dire existence but Ambani chose to excel. "His warm-heartedness has never been in the form of organised, large-scale philanthropy but a spontaneous humility," says Freddie Mehta of Forbes Gokak, an old friend.

"I am an unabashed fan of Dhirubhai Ambani and what he has achieved for himself and his family, for his stockholders and for Indian industry," says Subrata N. Chakrabarty, assistant managing editor of the US-based Institutional Investor. "I am not ignoring his blemishes, but I could name many business tycoons—Indian and American—who have done far worse, achieved far less." As senior editor of Forbes magazine, Chakrabarty met Ambani in '86, soon after his first stroke. In discussing one of his famous exploits—his use of the government's export-import schemes—Chakrabarty was surprised that Ambani was able to export spices at a loss in order to import rayon which he could sell at a huge profit. Later, he exported rayon at a loss and brought in nylon. And still later it was nylon for polyester. "He was not at all uncomfortable of having used a government programme in a way it was clearly not intended to be used," he recalls. "When I asked him about it, he said in Hindi: 'The law was there for everyone. I did it not once but three times, so others could have done the same thing. Am I to blame if my competitors are idiots?' To me, that represents the essence of Dhirubhai Ambani."

"There is magic in the man. The odd part being that it's the same that exudes from an Amitabh Bachchan or an Indira Gandhi," says Gita Piramal, author and managing editor of The Smart Manager. "He's an iconoclastic poster boy of a new India. Brash, fierce, pushing his way up from the bottom," explains Hamish McDonald, whose controversial Ambani biography was banned in India.

Dhirubhai's second stroke has suddenly brought Indian industry and stockmarkets face to face with the possibility of a Reliance sans him. "He used equity to grow and initiated a shift—of raising more and more money from the small and even smaller people," feels Motilal Oswal, CMD, Oswal Securities. Adds Ramesh S. Damani, member, BSE: "The history of modern Dalal Street is the story of Dhirubhai. He moved us from the backwaters into the global mainstream."

Meanwhile, even if he pulls through, it is almost certain that he will be even less active in the group. Though he's been spending only two hours a day in his office for the past some years, just the fact that Dhirubhai was around was a message of immense hope to investors. His aura hung around the group like a talisman. Indeed, so strong has Dhirubhai's charisma been that investors often overlook the fact that in the last decade, while Dhirubhai was withdrawing from the group, Reliance was growing at a compounded rate of around 35 per cent a year—a feat unparalleled by any other Indian corporate house—and that the Patalganga and Jamnagar projects were built by his sons, Mukesh and Anil.

As news of Dhirubhai's stroke spread, Reliance shares fell but saner voices agreed that it's just a knee-jerk short-term reaction. "It won't last," says a senior investment banker. "The fundamentals are robust and eventually stock prices are decided on fundamentals and not sentiment. The succession plan in the Ambani house seems to be in place and, besides, the organisation is run by professionals. If the price falls, that's the time to in fact buy." "I don't see Reliance suffering a discontinuity," says Krishnamurthy Vijayan, CEO, J.M. Capital Management. "If he passes away, market sentiments will be affected more in terms of a sense of loss rather than a loss on the stock market. "

Says Ambareesh Baliga, V-P, Karvy Stock Broking, "Dhirubhai hasn't built a company, he has built an institution. When a corporate has grown into an institution, it outgrows an individual or the promoter." That is perhaps Dhirubhai's greatest achievement. He created something splendid that he always planned would outgrow him.

Waifs Of The Gutters