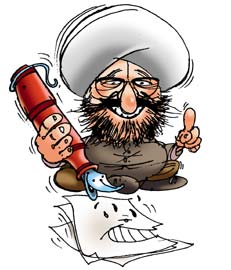 Dictionary of Sikh Names
By Rajwant Singh Chilana By Parmit Kaur Chilana
UBS Publishers' Distributors Rs 195; Pages 203
PEOPLE'S names can produce a lot of bawdy humour, particularly when translated into other languages. When a student in England, I had two pretty girls in my class: one was named Yvonne Bych. Despite her admonishing classmates that the name was pronounced Bikh, everyone called her Yvonne Bitch. The second girl was Laura O'Gilvy. Laura is a pretty common girl's name in England but it took me months of close friendship to tell her what it meant in Hindustani.

Once on a visit to Sweden, I was introduced to a Professor Lund who was due to go on a lecture tour of India. Lund is also a common name in Scandinavia. After a few drinks I confided in him that when being introduced to Indian audiences he should be prepared for a few sniggers. He took it very calmly and replied: "That is very interesting. I was in a similar predicament when a lady professor from your country came here to deliver some lectures and I had to introduce her. Her name was Miss Das. In Swedish, the word Doss means shit."

I have quite a collection of Indian names which sound very odd to my ears. Some years ago, I exchanged correspondence with a gentleman whose name was Mr Chootiah. Every Christmas when I go for a short vacation at Bogmalo beach in Goa I pass a clinic with the name printed in bold letters, Doctor Chodankar. It is just as well the doctor practices among the Konkanese and not in northern India. The same goes for many Tamilian friends whose names are based on the lingam: Shivalingam, Mahalingam, Bhootalingam, etc.

Sikh names do not provide the same kind of fun. Most of them are of Hindu origin with the appendage Singh (lion) or in the case of females Kaur (lioness or princess). A few like Nawab, Iqbal, Mubarak, Gulzar are Muslim. They also borrowed some from the British: Angrez (English), Jarnail (General), Kaptaan (Captain) and Major. Sikh aristocracy, which employed English nannies, accepted nicknames given by them: boys got names like Cecil, Robin, Dicky, Richard and the like. Girls were named Jewel, Ruby, Diamond, Dolly, etc. About the oddest Sikh name I have come across is But Shikan (Idol-breaker) Singh. He is a member of the Foreign Service. Another combination of the first name, the surname and assumed pseudonym which sounded strange was that of the eminent scholar, Rajya Sabha member and Governor of Goa, Dr Gopal Singh Dardi, which meant Protector of Cows and Lion Who Feels Others' Pain.

Sikhs claim they abolished caste distinctions and use a single surname, Singh. Now that caste has raised its ugly head, so many have re-attached caste names like Randhawa, Brar, Gill, Sandhu, Sidhu (all Jat agriculturist tribes), Ahluwalia, Sethi, Narula, Chhatwal, Malhotra, Joshi, Raina (all Khatri Arora or Brahmin). Some have got around the problem by attaching names of their villages or towns: Longowal, Badal, Barnala, Ramoowaliah.

Rajwant and Parmit Chilana's compilation of Sikh names is not designed for amusement but information. Both are academics settled in Canada. They have made a comprehensive list of men's and women's names which Sikh parents looking for appropriate names for their newborn children will find useful. Names are more important than people realise. At my naming ceremony, as the Granth Saheb was opened, the letter that appeared on top of the page was kh. My grandmother to whom I was devoted gave me the name Khushal. I hated it because of its abbreviation Shalee by which everyone called me. At school, boys tortured me by chanting a doggerel: Shalee Shoolie, Bagh dee Moolee (This shalee or shoolee is the radish of some garden). I got rid of Khushal and changed it to Khushwant to rhyme with my elder brother's name Bhagwant. According to this dictionary it means full of happiness. Come to think of it, I might well have stuck to being Khushal Singh. As they say what difference do names make?

Natha Singh, Prem Singh
One and the same thing.

Black Holes of the East