The colour of absolutism, the distant sound of goosestepping 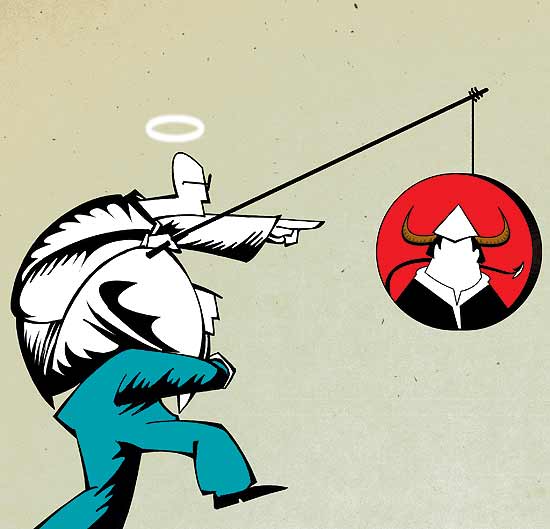 At the outset, let me confess my glee at the discomfort some of our grand popinjays have been subjected to by activist-politician Arvind Kejriwal. Rest assured, therefore, I shall not work the soapsuds upon Robert Vadra’s tarred-and-sullied plumage. But my vocation is scepticism. So I cannot help being drawn to question Kejriwal’s claims of heralding a superior politics.

Kejriwal, the progenitor of this ‘New, Improved’ politics, is himself the progeny of the campaign for the Right to Information. That campaign sought to fight systemic corruption and abuse of power by making power-holders accountable. With the Right to Information, people could seek out details of almost every aspect of government functioning—tenders, auctions, bureaucratic decisions, policymaking, file-notings, anything that did not breach secrecy and security concerns. The right was created; in turn, it created a new consciousness and empowered clusters of questioning (even adversative) RTI activists, taking on and exposing wrong-doing across all states and at all levels, from panchayats to the Centre.

Over time, the limitations of the Right to Information became apparent—one of the crippling ones being the absence of empowered institutions of public audit and authorities for independent investigation and prosecution. A valid demand arose for an ombudsman, or Lokpal, to scrutinise governance and end systemic corruption and abuse of power. The CWG and 2G mega scams planted the demand deeper in the middle-class mind, especially in midsize towns, cities and the metros.

But civil society had differences over whether the proposed Lokpal should be a gargantuan, centralised monolith with power concentrated in a single body or whether it should be part of a distributed, balanced assembly of bodies. Kejriwal and his team preferred the huge tower of grey, concrete corridors leading to an Omnipotence, reminiscent of Big Brother’s bureaucracy and secret police. With deliberation he dropped some old allies over this difference of opinion and hooked up with Baba Ramdev and Anna Hazare, making the latter the icon of the anti-corruption campaign and the demand for their kind of Lokpal. Anna, Kejriwal, Kiran Bedi and the Bhushans managed to create a blockbuster buzz around the campaign. The cussedness, hypocrisy and stubbornness of politicians as a whole and the vindictiveness of the Congress-led UPA regime brought fieriness to the debate and middle-class support for the campainers grew, though its strength has wavered. In all this, what was revealed in the glare of the newschannel crews’ set-lights was the refusal of Kejriwal’s team to engage with any institutional visualisation of the Lokpal that did not match its own on every point. Many well-meaning sympathisers were unnerved by such absolutism and had nightmares of what it could lead to.

The campaigners’ association with the slippery Baba Ramdev raised more doubts about their intent. So did the support they’d received from a section of the Sangh parivar. The fickleness of the Indian ‘apolitical’ class and the TRP-driven TV news media caused the campaigners’ audience to thin out. Team Kejriwal remedied this promptly. It first proclaimed distance from Baba Ramdev and the Sangh. Then, it split from Anna and some other comrades, deciding it proper to form a new political party that would be the harbinger of a new, better, cleaner politics. As a believer in a partisan, adversarial politics in democracy, I have no complaints with this. What some of those who were till recently his comrades complain about, however, is how Kejriwal camouflaged his intentions and gave the short shrift to democratic consensus-making. Kept out of the loop, they’ve called Kejriwal’s attitude dictatorial and opportunistic. Kejriwal and his current posse would say it was necessitated by the intransigence of power-wielders. That may be true. But Kejriwal’s fleet-footedness in shifting stances and gathering and dumping allies point to the possession of skill-sets suited to the sort of politics we are used to seeing—with an abundance of personality- and person-based parties. I wonder if those skill-sets are the drivers a party that promises a changed political culture requires.

Public anger against corruption—focused anecdotally though it might have been in times when newspapers, the only private media, were more often tame reporters than acute investigators—has indeed changed regimes. But there has been no comprehensive, systemic reform. Kejriwal’s efforts against corruption are unfortunately beginning to seem like crude hit-and-run tactics; they postpone the issue of comprehensive institutional reform. They stoke cynicism about institutions of any sort and kill any enthusiasm for strengthening democratic institutions of accountability. They evoke historical memories of the rise of authoritarian regimes. The worst kind of grand popinjay is a self-righteous popinjay in jackboots.