The Jury Is Out Cold

An e-mail that was alleged to contain a list of jehadis was key evidence. It only listed casualties from Gilgit's Balwaristan movement. 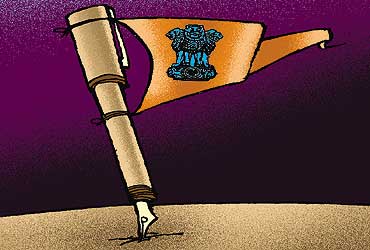 One very late night in early June last year, there was a knock on the door. When he opened it, his house was invaded by policemen and he was told it was an I-T raid. But the invaders were accompanied by two IB officers. The IB justified Gilani's subsequent arrest on the grounds that there was a file in his computer, under the title "Forces", that was of such sensitivity and importance that if it fell into enemy hands, it would harm India's security. By simply possessing such information, Gilani had violated Section 3 of the Official Secrets Act. The IB based the arrest on a finding of the Directorate General of Military Intelligence (DGMI) on June 14 that the document gave the Order of Battle of all the forces under the Northern Command, had not originated in the army but had probably been collected by an enemy agent, and was prejudicial to the country's security. Based on this, Gilani faced a mandatory 14-year prison term.

But Gilani's lawyers pointed out that the document was already in the public domain as it had been published in 1996 by the Islamabad Institute of Strategic Studies in a publication entitled 'A Review of Indian Repression in Kashmir'. He had simply downloaded it from the institute's website for ready reference. Gilani's claim could have been verified in a matter of minutes if the document was still on the Net, or within hours by a computer expert. Gilani should therefore have been interviewed, cautioned against leaving the city and arrested only after his claim had been proved to be false. This was the procedure followed by the IB and RAW with several journalists suspected of writing prejudicial articles for foreign journals during the Emergency. Instead, he was arrested first and the document sent to the DGMI for assessment a day later.