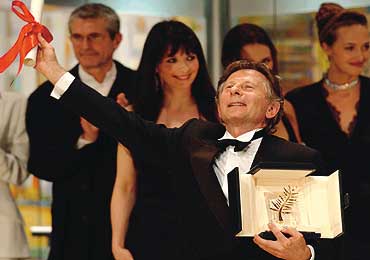 Be that as it may, The Pianist is Polanski's much-awaited holocaust film and an offering from the Polish auteur after a longish break. He spent a lot of his childhood in war-torn Warsaw and knew at close quarters what went on in the city's infamous ghetto and the extermination camps of Treblinka and Auschwitz. The film is based on the times and troubles of Wladislaw Szpilman, a brilliant Jewish pianist, his escape from a transport going to Treblinka and his rescue by a compassionate German Wehrmacht officer. The film goes over ground made familiar by Spielberg and Wajda, among others, the knocks on doors in the middle of the night and Lugers fired pointblank at cringing children. The Pianist has the merit of making all this only a chilling counterpoint to the saga of Szpilman (Adrian Brody), not its central material, and of doing it as impeccable cinema. But the Palme d'Or ?

If unvarnished strength of narrative went against Mike Leigh's All or Nothing, it should in justice have lost points for The Pianist. The film depicts the decline into slab-faced despondency of Phil, a London taxi-driver (Timothy Spall). He is attended by Penny, his wife of cooling ardour (Lesley Manville), and two decidedly obese offspring. The film showcases ensemble playing of a high order—rage, bitterness and eventually love. The family is brought together by hateful son Rory's heart attack, in the setting of a scruffy housing estate, played over a long weekend. Spall and Manville's minutely-observed performances seemed to everybody strongly deserving of individual honours but they, like their director, left the Riviera with empty hands.