The Judge Won't Be Pre-Judged 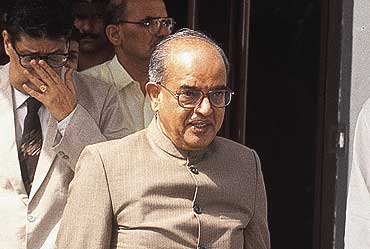 outlookindia.com
-0001-11-30T00:00:00+0553
The reinduction of George Fernandes as defence minister has "upset" those working with the Venkataswami Commission looking into the Tehelka tapes episode. According to a source close to Justice K. Venkataswami, the judge himself is "extremely unhappy but won't be pressurised, being a fiercely independent person". Fernandes is scheduled to appear before the commission and now will do so in his new avatar as defence minister. "It is demoralising. What was the tearing hurry to bring him back?" asks a commission official.

Apart from the precedent the government has set for future commissions of inquiry, sources told Outlook that a larger signal was being sent to the judge presiding over the seven-month-old commission. According to them, the subtext was to mount pressure on Venkataswami to quit in protest and derail the proceedings of the commission. Says a source close to the judge: "If some believed he would quit, they are mistaken. Justice Venkataswami will remain firm and determined to carry on." Also playing on some minds, especially after Fernandes' return, is whether the commission will get an extension when its tenure ends on November 24.

Though most officials associated with the commission put on a brave face, they're aware that systematic efforts are on to undermine the authority of Justice Venkataswami and also the credibility of the commission. Former Samata Party president Jaya Jaitly, for one, has been accusing the commission of not having gone in for a detailed probe on the authenticity of the Tehelka tapes. What riled her was Justice Venkataswami's October 12 order confirming the veracity of the Tehelka tapes and his refusal to refer the unedited tapes to a panel of experts. This was seen as a setback for Fernandes. Jaitly was quick to react, saying the commission should have gone for the "truth" and not given a ruling that there was no prima facie case of the tapes having been doctored. The Jaitly contention was that Tehelka had manipulated the tapes to frame her and Fernandes. The tactic is to shift the focus from the 16 defence deals the commission is probing to the veracity of the tapes.

To mount more pressure, Milin Kapoor, an expert who appeared on Jaitly's behalf before the commission, at a press conference on October 18 reiterated that there were cuts in the tapes, that some portions were doctored and that audio discrepancies were found. On the same day, Samata president V.V. Krishna Rao said his party "had apprehensions on the commission's functioning" and was thinking of moving court on its Tehelka tapes ruling.

The commission has not taken these allegations lightly. "We plan to take this issue up soon. Allegations made outside the commission when the issue has already been settled clearly have other intentions," said an angry commission official.

That the functioning of the commission till date has not been easy is an understatement. Subtle and not-so-subtle pressures have been at work. According to highly-placed sources in the commission, several industrialists and well-to-do businessmen have been at work vouchsafing for the credentials of some people named in the Tehelka tapes. "They say we (the commission) have been doing a fine job but at the end of the conversation, some hints are dropped to save someone's skin," says a source.

Surprisingly, when Justice Venkataswami was named to head the commission, few believed he would be able to make swift headway in the mammoth task before him—ploughing through the maze of documents relating to 16 defence deals.In fact, his appointment was widely perceived as a government ploy to buy time.

But seven months down the line, the material evidence before the commission is startling. According to a commission official, after over 50 sittings it is close to finalising its report on 11 defence deals highlighted by the Tehelka expose. Some of the deals being examined by the commission include the hand-held thermal imagers, armoured recovery vehicles, Barak missiles, Krasnapol laser-guided artillery shells and the Kornet missile. All 11 deals had been finalised during Fernandes' earlier tenure as defence minister and an adverse report will obviously be an embarrassment to him. "I can say that 60 per cent of the commission's work is over. And from the evidence which seems to be emerging, nothing is hunky-dory," says a commission official.

An indicator of which way the commission's possible findings could go: it is banking heavily on the report of the Comptroller and Auditor General on the emergency arms purchases during Operation Vijay, which pointed to grave "discrepancies" in Rs 2,000 crore worth of procurements.

While individual culpability is part of the commission's brief, at present it is concentrating on identifying the lapses in the overall defence procurement system. "We are looking at the facts at hand," says an official. There is a strong possibility, then, that individual responsibility may not be fixed in each of the defence deals. "For that, we might need a separate commission for each deal. Each of these transactions runs into 5,000 pages," says an official. Sifting through all that and then cross-examining witnesses would be, to put it mildly, time-consuming.

Fernandes' induction has come as a body blow to the functioning of the Venkataswami Commission. But it refuses to be sucked into the controversy. Justice Venkataswami, according to sources close to him, seems determined to go ahead with his work. Interference or no interference. More stories on Tehelka probe