The Jail Is A Bungalow

Lalu Yadav serves up another samosa, with chutney, as he gets a lavish house and estate for isolated treatment. Kelly’s Bungalow, it’s called. And it comes for free. 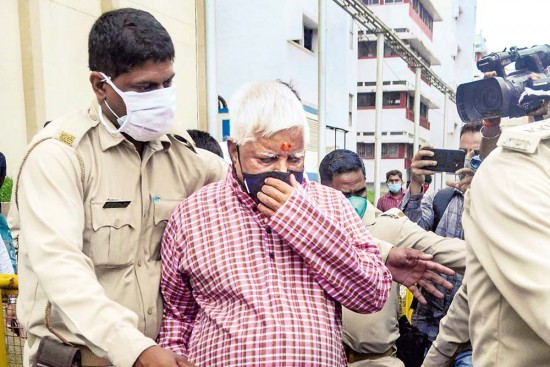 You can keep Lalu Prasad out of controversy but you cannot keep controversy out of Lalu Prasad. And this time, the 72-year-old RJD supremo, serving jail term in the fodder scam, has landed in another pickle after he was rented out the spacious bungalow allotted to the Rajendra Institute of Medical Sciences (RIMS). Lalu had been serving his sentence at a paying cabin of RIMS for health reasons but was recently shifted to Kelly’s Bungalow, built on a three-acre campus in Ranchi. The bungalow was vacant as RIMS does not have a permanent director.

It was Lalu’s doctor, Dr Umesh Prasad, who had recommended him to shift from the paying ward, owing to the mounting risk of corona infection. Lalu’s security personnel were found corona positive recently. Now, a question has arisen over who will pay for Lalu’s rent for his stay at the bungalow as there is no provision for anyone except the director staying at the official residence?

BJP state spokesperson Pradeep Sinha has objected to Lalu’s stay in the director’s bungalow, saying he should be charged the rent of the bungalow as per the market rates. “The district administration should fix the rate, otherwise, the government should clarify its stand,” he says. Lalu is also accused of meeting RJD ticket aspirants for the assembly polls, due in October-November.

Health minister Banna Gupta (himself in home quarantine), the health secretary, RIMS director-in-charge and the superintendent of RIMS refused to comment on the issue. Nishit Ekka, RIMS’s PRO-cum-doctor says since no one had imagined such a scenario to emerge during the pandemic, there is no fixed rate for the director’s bungalow as yet.

Rajesh Thakur, state executive president of the Congress, an ally of the Hemant Soren government, says that Lalu Prasad is undergoing treatment and...