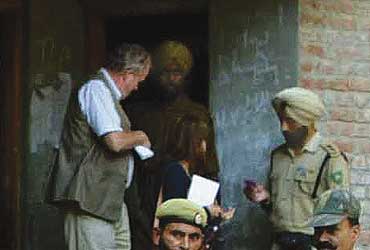 outlookindia.com
-0001-11-30T00:00:00+0553
The 13 diplomats—from Denmark, UK, France, US, Canada, Sweden, Switzerland, Germany, EU—who observed the first phase of the Kashmir election have delivered their preliminary verdict: the election machinery there worked smoothly. The only government to officially voice its view on the election has been the US. Spokesman Richard Boucher said: "We do have reporting from US embassy in Delhi that indicates a positive start to the process. It's true there was violence, but it was relatively at a low level...."

Diplomats who visited the Valley did indeed notice instances of "coercion" but didn't think it was endemic, or in any way reflected government policy. In some cases, diplomats thought, this could have been because security forces were allaying the fear of violence, urging people to vote.

Diplomatic sources also add that coercion was certainly not the common theme. In fact, in many pockets, despite violence, people came out to vote. There were other areas where people didn't exercise their franchise because they were scared of the threat of violence.

Diplomats reported that they didn't encounter hurdles in observing the polls, and thought the government was helpful. Early on September 16, two Mi-17 helicopters carrying a clutch of 13 diplomats and journalists lifted off from Srinagar airport. One was a hopping flight, first touching Gurez where the entourage on their own visited two or three polling stations. They then went to Bandipore and, finally, Kupwara, where the batch split into groups which visited polling stations of their choice in bullet-proof cars with police escorts. The other copter took a batch to Uri in Baramulla, where they formed two groups to watch the polls. One diplomat drove from Srinagar to undisclosed districts for reconnaissance.

The green light for diplomats to observe the election was shown on September 10. Twenty-eight passes were issued to diplomatic missions; 13 of them visited the Valley on September 16, the rest will observe the remaining three phases.

What's interesting is that diplomats have been provided access to polling stations, which wasn't the case in 1996. This is testimony to New Delhi's compulsion to make the election process as transparent as possible.

Yet, on July 28, when US Secretary of State Colin Powell had suggested that "permitting independent observers and freeing political prisoners would be helpful", it provoked Chief Election Commissioner J.M. Lyngdoh to declare, five days later, that "the day of White man observing what the native does is long past. He cannot determine what the coloured man does and whether he is doing it right or wrong."

Four Phases Of Elections: The Picture In 2002