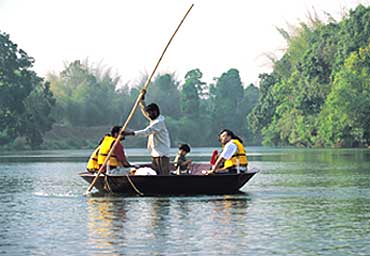 This summer, the magic of hamara Bharat is seducing the Indian traveller like never before. The economic recession, swine flu, and the recent spate of racist attacks on Indians in a favourite holiday destination, Australia, have all combined to make many Indians look homeward for a holiday. Of course, the economic slowdown at home, with salary cuts for many working professionals, coupled with increasingly astronomical visa fees and often humiliating security checks of Indians at international airports, have further convinced many to drop their plans of going abroad and head for some corner of Incredible India instead.

Subhash Goyal, president, Confederation of Tourism Professionals of India, says, "In 2009, the travel industry is expecting a 10-15 per cent increase in the number of domestic tourists." And though it's still too early for any definite statistics, travel operators are seeing a corresponding downturn in the number of Indian tourists going abroad. A recent survey conducted by the popular travel website, Tripadvisor, finds 37 per cent of Indian respondents opting for holidays within the country this year—a significant increase over the 15 per cent notched up in previous surveys.

With hoteliers and the airline industry pulling out all stops to woo the domestic traveller, Indian holidays have rarely come cheaper. Hotels, hit hard by the sharp decrease in foreign tourist arrivals, are offering unprecedented bargains. For example, a typical three days-two nights package offered by a five-star hotel, which last year cost Rs 31,500 for a couple and two kids under 12, is this year being offered for as low as Rs 18,000. "Hotels have really slashed their rates from last year," confirms Sharat Dhall, MD, Tripadvisor. "And most travel routes have at least four or five airlines competing for the domestic tourist's attention, with low-cost carriers offering holiday packages as well." It's not surprising, then, that for many Indians this year, a comfortable holiday at home seems far more alluring than a penny-pinching trip to the West.

Bombay-based executive Khusru Patil has just returned from a family holiday at Karnataka's Nagarhole National Park. "When you vacation in Europe or the US, the value of Rs 100 is reduced to Rs 10," says Patil. "We opted for India this summer because for the budget that you set aside for a holiday abroad, we could get a super-luxurious trip here."

There's a new awareness about the variety of interesting destinations within India that is inspiring many families to break free of stereotypical choices. Crowded hill stations like Shimla or tourist-infested beaches in Goa are increasingly falling out of favour with the Indian traveller. "Places which are not part of the commercial tourist circuit are attracting more families," says Bob Rupani, author of the best-selling travel guide, Driving Holidays in India. "Parents want to give their children a more well-rounded experience, rather than restricting the holiday agenda to just shopping and eating out." Bangalore-based academic and mother of three, Kala Krishnan Ramesh, recently went on a vacation to Hampi. Her two daughters and teenaged son loved the trip. "The place was not crawling with tourists and the children were thrilled to soak in the ambience of Hampi," says Ramesh. "Who wants to gawk at glass-and-steel skyscrapers in Malaysia or Singapore when India is teeming with magnificent historic spots?" 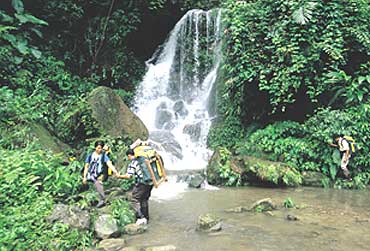 
Many others like Ramesh are on the lookout for locations steeped in the flavours of India, and there's growing interest in territory that is relatively less-explored. Kalimpong, Sikkim, Arunachal Pradesh, Meghalaya; hamlets nestled in the hills of Coorg, Uttaranchal and Himachal; the pristine beaches of Gokarna and Murudeswar, have witnessed a sharp increase in domestic tourists this year. "Whether out of necessity or choice, Indians are displaying a new awareness of the stunning range of options in the country," observes Kashmira Commissariat, COO, Outbound, SOTC. "Adventure and camping spots, national parks, the northeastern states—the domestic traveller is exploring them like never before."

Delhi-based doctor Padma Dolma, who spent a week at picturesque Naukuchiatal in Uttarakhand last month, is already dreaming of her next Indian vacation. "Travelling abroad has its own charm, but India can satisfy even the most insatiable traveller," she says. Calcutta based e-learning professional Monjima Sinha shares Dolma's fascination with off-the-beaten-track destinations. To her, Indian holidays are all the more attractive because planning them is hassle-free. "No applying for visas, no paperwork or documents to submit, no foreign exchange required," she points out.

As more and more Indians wake up to the beauty of their own backyard, is the snob value of 'foreign holidays' going down a notch? Does talk of jetting off to Paris or cruising down the Nile draw a bored yawn from listeners who might perk up when you mention trekking in Binsar or exploring the Chettinad culture of Karaikudi? "I think its cooler to know Hampi, and Ajanta and Ellora, than to drool over Turkey's rock churches," says Calcutta-based media professional Angona Paul. "It's a lot more fun to dig up the gems in your country before exploring foreign lands," agrees Kabindra Ghimere, a Bangalore-based engineer. Aditi Tandon, an advertising professional from Bombay, shares the sentiment. "Green getaways or sandy deserts, small towns pickled in a time warp or manic metros, cheap shacks, fancy hotels, long road trips, quick flights—India has it all," says Tandon. "It'll take me a lifetime to explore them. Foreign destinations can wait."