The Invention Of India

Ravi Varma’s cross-cultural pastiche created an idealised look for both Indians and their gods. Chawla puts a critical onus on the man and the mechanics of his trade. 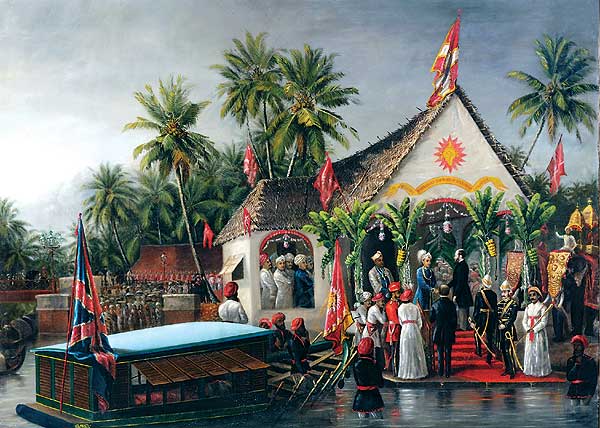 Even in 21st century India, it is difficult not to encounter on a daily basis the iconometrics of the two-dimensional pictorial code that Ravi Varma drilled into the subconscious of a people waking up to the idea of a self-image as part of their claims to cultural uniqueness and identity in the face of colonial/ imperial subjugation. It was accompanied by, as art historian Ratan Parimoo has pointed out, “a newly awakened taste for the luscious”.

Even though mass-produced printed images had been in circulation since the 1870s, like the Kali and Chinnamasta oleographs from Chore Bagan Art Studio, Calcutta, it was only after 1894, when Ravi Varma, along with his brother Raja Varma, set up the Ravi Varma Fine Arts Lithographic Press in Bombay (shifting it later to Lonavla), that deities like Lakshmi, Saraswati, Krishna and Rama received their  unique identities and a hybrid pan-Indian costuming, which was to freeze into a cultural trope fairly swiftly and get eternalised as the ‘authorised look’. It’s this ossified look that created such inexplicable troubles for more recent painters like M.F. Husain who sought to deal playfully with a hardly 100-year-old convention.

It is only in the past decade that the Ravi Varma imagery has been shown up to be a cross-cultural pastiche with a neat coexistence in his canvas of Indian facial types, Western landscapes, northern costumes, southern jewellery and an intuitive naturalism that was attracted to a kind of provincial European academicism. There is very little of any nationalist aspiration evident in an artist who was so active during the early decades of the national movement.

So the inevitable question is, had Ravi Varma only painted his prolific 2,000-odd canvases in a career spanning over three decades and not set up his famous printing press, would the history of India’s contemporary visual landscape have been different? It is interesting that there have not been too many attempts at pursuing such an inquiry. It is even more curious that for an artist who was severely critiqued in the first decades of the 20th century by the likes of Ananda Coomaraswamy, Sister Nivedita and Sri Aurobindo and in the last decade by artists like Husain, Akbar Padamsee, Tyeb Mehta and J. Swaminathan, so little existed in the form of any in-depth biography or critical study. This is the lacuna that Rupika Chawla’s book has now so comprehensively filled.

Chawla is known in art circles primarily as a restorer of damaged paintings. In 1993, she co-curated (with artist A. Ramachandran) an exhibition at the NGMA, Delhi, of restored Ravi Varma canvases, returning the peripatetic painter from Kerala to the centre of a raging controversy regarding his worth as a serious artist and as an early Indian modernist.

This book restores Varma himself back into national consciousness. It also digs out the provenance of almost every painting.

However, with this sumptuous, well-researched and deeply written volume, Chawla has performed a much needed art-historical task by restoring the artist himself back into contemporary national consciousness. In the process, she has dug out the provenance of virtually each of the paintings in the book, along with a socio-political biography of each of its subjects—historical or mythological. There is a racy time-line running through the narrative which makes it most accessible to the scholar as well as the layperson.

She has also demonstrated the need for current critical practice to equip itself with basic knowledge of the behaviour of synthetic paints—industrial colours packaged and sold since late 19th century in extruded tin tubes—and the polymerisation process that occurs as the linseed oil dries over time, creating a new translucency to the surface. This pentimento, or the ‘ghost images’ emerging in Ravi Varma’s various canvases that she has referred to, is likely to lead to an all too new interest in his work.

The minor disappointment is with the lack of a comprehensive bibliography to the book and to the smooth bypassing of the debate around Ravi Varma’s status as a modernist. But the author has effectively resurrected the painter-king from Kilimanur.