The no-confidence motion has, in fact, brought the Congress into the reckoning 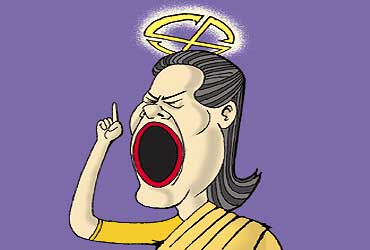 outlookindia.com
-0001-11-30T00:00:00+0553
The ease with which the National Democratic Alliance defeated the Congress' no-confidence motion in Parliament has only reinforced Sonia Gandhi's reputation for ineptitude in many peoples' minds. The feeling is that only a 'foreigner'—incapable of understanding Indian politics at a visceral level—could have made the mistake of issuing a challenge that it couldn't possibly win. That all she has done is expose the Opposition's weakness and lack of cohesion (remember the 12 'missing' votes?) and reinforce the NDA's image of invincibility. Again, only a politically inept leader would have dared to take on a prime minister at the height of his popularity and power, and a famed orator to boot. The fact that the Congress president levelled as many as nine charges against the government has been taken as clinching proof of her political clumsiness. "A shotgun is alright if you want to shoot flying ducks," one newspaper commented. "But if it is an elephant you want to lay low, an elephant gun is essential." "A super highlighter," the same national daily concluded, "has heavily highlighted Congress ineptitude".

Wrong, Mr Editor. The only thing that yours, and a number of other comments in a similar vein, have highlighted is the extent to which an almost completely urban, middle-class press has lost touch with the people of the country. Far from being inept, the Congress' no-confidence motion is the shrewdest political move the country has seen in many years, for it has killed several birds with one stone.

Prior to last Monday, the Congress was truly a party in the doldrums. In Shimla last month it had decided, in principle, that it would actively look for poll alliances with like-minded parties to face the NDA in the next election, but it did not know which its potential allies were and, more important, who were the fence-sitters that needed to be wooed. What was worse, so far as the public was concerned, it was a party without a face. Almost no one in the country knew what the party stood for and what it would try to do if it came to power. And its leader, Sonia Gandhi, was almost invisible.

This was only partly her and her colleagues' fault. Sonia Gandhi had been levelling most of the nine charges that she repeated in Parliament last week in speech after speech across the country. But an otherwise preoccupied media had paid little attention to her speeches. As a result, in this media-driven age, the Congress had become invisible. By contrast, every word Vajpayee or Advani uttered was on the front pages of all the newspapers and on prime-time TV, day after day.

The no-confidence motion has changed all that. The Congress now knows exactly where it stands in terms of its allies and opponents. It also knows that for the time being, at least, the AIADMK is still a fence-sitter and therefore a potential partner. For the first time in five years, it has been able to take over the framing of the agenda for debate and push the NDA onto the defensive. What is more important, it is no longer faceless. For 80 minutes, a large part of India saw Sonia Gandhi and heard her speak about her concerns in both English and Hindi. The nine charges she levelled at the NDA may be old hat to jaded mediapersons, but they cannot have failed to strike a powerful chord with the wider public. For the truth is that the NDA has achieved very little in the past five years.

The BJP-led government has failed to lift the growth rate from the 5 per cent to which it slumped after the Congress fell from power in 1996; failed to prevent a steep rise in unemployment after 1996; failed to improve the functioning of the judiciary, failed to reduce corruption and, more important, failed to end institutionalised extortion from the public by the economic bureaucracy.Instead, it has increased its power and further reduced its accountability by passing poorly framed but draconian laws like pota.

It has also failed to implement its pre-poll promise to reform the system of electoral financing. Instead, as the Tehelka videotapes showed, it has fallen comfortably into the habit of using defence contracts to line private and party coffers. It has brazenly flouted Parliament's right to know, by refusing to release the cvc report on defence deals to the public accounts committee of that august body. And worst of all, it has weakened Indian pluralism, the most basic feature of the Constitution, by allowing a chief minister to turn communal passion into an electoral weapon. As if that were not enough, it has also begun to rewrite India's history for impressionable schoolboys and girls, erasing the Muslim contribution to the making of this country.

Finally, the Congress' timing cannot be faulted, for the no-confidence motion has coincided with the findings of a MARG-India Today 'Mood of the Nation' poll that shows that a strong anti-incumbency wave is sweeping the country. And guess what is bothering the people most? It's unemployment, poverty, corruption and rising inequalities in the distribution of income. Sonia Gandhi has struck while the iron is red hot. What's left to be seen now is whether she can stick to her task, keeping it hot till the next elections.