The Inner Voice Of Sonia

Thank God for it. It saved India from plunging into permanent emotional upheaval. 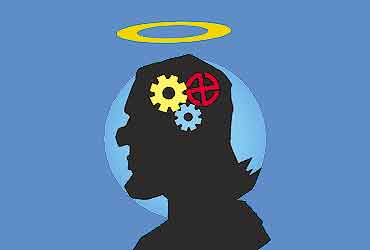 outlookindia.com
-0001-11-30T00:00:00+0553
Otherwise a very private individual, Sonia Gandhi made an uncharacteristic admission in a pre-election TV interview. Her sense of duty, she said, also stemmed from the silent expectations of all those past generations of Nehrus and Gandhis whose portraits graced her home. Their eyes seemed to follow her, prodding her to her duties.

Sitting through an incredible show of fawning and flattery in the Central Hall of Parliament on the evening of May 18, Sonia must have seen the portraits of national leaders hanging on the panelled walls. Did their eyes stare down at her? Did she see them recoil in horror at the inability of the Indian National Congress—an organisation they too had nurtured—to find one Indian worthy of being prime minister? Did they arouse her inner voice?

Let us, for the moment, rise above our voting preferences. India has reason to be beholden to Sonia for rescuing it from an embarrassing and humiliating predicament. There seemed no constitutional bar on her being sworn in as PM. In a fractured Lok Sabha, she was the leader of the single largest party and had the unequivocal endorsement of a majority of MPs. Election 2004 did not produce a categorical winner but Sonia came closest to epitomising the anti-NDA verdict. The top political job was hers for the asking.

The foreign origin issue was more than a mere political divide between the Congress and the BJP. It affected the very soul of India. To a section of cosmopolitan India, the manner in which Sushma Swaraj planned to demonstrate her outrage may have seemed unappetising. But the sheer starkness of a tonsured auntie-next-door undertaking penance would have been traumatic. The spectacle of Uma Bharati relinquishing her chief ministership and setting forth to mobilise Bharat against an Italian interloper would also have unsettled India.

For the past fortnight, cellphones were treated to a delicious array of Italian jokes. They drew sniggers or became the subject of dinner table conversation. But underneath the frivolity, middle-class India felt a sense of deep unease at having to acknowledge an Italian-Indian Gandhi as its leader. For the moment, the disquiet was masked in both mirth and bewilderment. Sooner or later, it would have progressed to humiliation and shame. The inner voice of Sonia Gandhi has stopped Indians from feeling small.

The inevitable anti-incumbency backlash against a 'foreign' ruler would have been vicious. It would also have been laced with visceral hate. The inner voice of Sonia Gandhi has saved India from turning mean.

It is actually an intensely political inner voice that has turned dilemma into advantage. Indians being suckers for self-abnegation, Sonia's calculated "No" has transformed her from a political leader to a deity. At one stroke, she has punctured the outrage of all those who painted her as a calculating, power-hungry guardian of her family's inheritance. Now, George Fernandes, Govindacharya, Narendra Modi, Sushma Swaraj and Uma Bharati are looking small and petty.

However, before we rush to denounce the BJP and the entire Sangh parivar as a bunch of obscurantist, racist and ill-mannered louts, it may be prudent to acknowledge one harsh truth. The inner voice of Sonia Gandhi would not have spoken had the Sushmas and Umas not provided a preview of the resistance she would encounter. As Sitaram Yechury told The Telegraph, "She felt the BJP should not use her to create divisions in the country."

Her inner voice proved a shrewd political barometer of the incalculable damage she would do to her family's inheritance and to her son's future prospects. By stepping aside from the direct line of fire and positioning herself as Mother India, she has insulated the Gandhi mystique from the vagaries of a turbulent coalition.

Manmohan Singh may or may not flounder. If he does, the blame will not rest on the dynasty. Indeed, the Congress will depend even more on Mata Sonia and her children to come to the rescue. And if the venerable sardar performs a miracle, Sonia will have little hesitation in calling a snap election, cashing in on her new image and pave the way for the self-effacing Rahul to take the job she turned down.

Either way, Manmohan Singh is a stopgap prime minister.

The inner voice of Sonia Gandhi is never bereft of calculation. This year's theme is renunciation and she has successfully sold the story to interviewers who have been overawed into amnesia. Five years ago, standing in the forecourt of Rashtrapati Bhavan, Sonia uttered those memorable words: "We have 272." It threw the country into a tizzy, forced Mulayam Singh Yadav to flaunt his nationalism and triggered the departure of Sharad Pawar and Purno Sangma from the Congress. Was she not the prime ministerial candidate then?

Did she get herself chosen unanimously as the UPA's prime ministerial candidate on May 16 merely to have a laugh at the expense of H.K.S. Surjeet, Jyoti Basu, M. Karunanidhi and Laloo Yadav? Did anyone then guess that her real aim was to save Uma Bharati's job and Sushma Swaraj's hair?

This is not an opportune moment to dissect the native cunning of Sonia's inner voice. This is the time to thank invisible forces for making her Mother India rather than Madam Prime Minister.