Yes, the Northeast-‘mainland’ experience is a chequered one. That’s not all it is though. 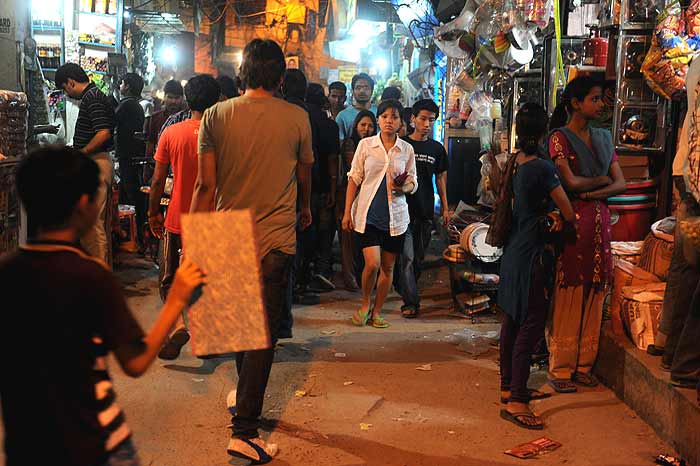 The deaths of Dana Sangma in the capital and Richard Loitam in Bangalore have put the harassment of people from the Northeast back on our front pages. Although a racial motive has not been attributed to either death as yet, it reminded everyone about the persistent challenge of bridging the disconnect between the Northeast and the rest of India.

In extreme instances, as with Loitam and Sangma, the harassment escalates until it comes to a tragic head. For many others, it is a recurring reality imposed on them because of their ethnicity. C.P. Singh, a Manipuri scientist with the Central Forensic Science Laboratory in Delhi, is one such victim. Singh has filed a police complaint, alleging that his colleagues regularly call him “chinkie” and have thrown mud at his car and house. He also alleges that he has not been promoted because he is from the Northeast. But for every cautionary tale, there are the success stories—not as well spotlit. As many victims there are of prejudice, there are those who have overcome it. 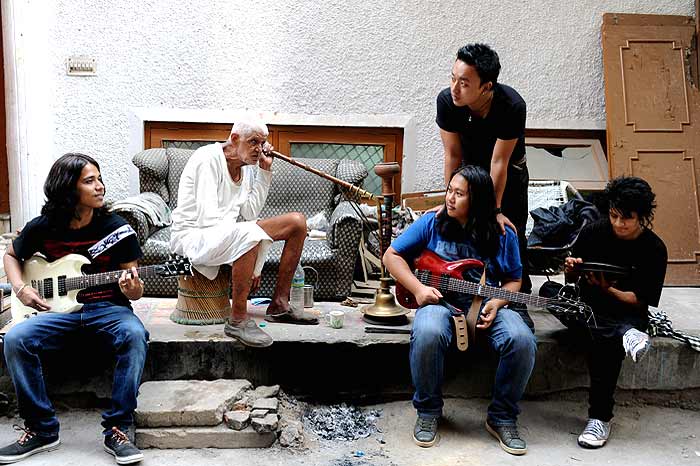 Krishna Nagar Members of The Mangalz, a five-member metal band from the Northeast, rehearse during a jam session. The Mangalz is the first Hindi rock group to raise issues of social injustice and corruption through their music. (Photograph by Tribhuvan Tiwari)

Metros such as Delhi, Bangalore and Pune are attractive cities for migrants from the region. They come in search of educational and employment opportunities. An estimated 2 lakh people from the Northeast are said to be living in Delhi alone. Of these, 78 per cent claim to have faced harassment at some point, says a report released last year by the Northeast Support Centre and Helpline. Some of the problems that receives frequent citation in the report range from hostile landlords and eve-teasing to insensitive police personnel and sexual harassment. “There are many layers and levels of discrimination against people from the Northeast. It differs depending on the age group, nature of workplace such as bpos, restaurants, parlours and so on,” says Ninglun Hanghal, a social activist who lives in Delhi. 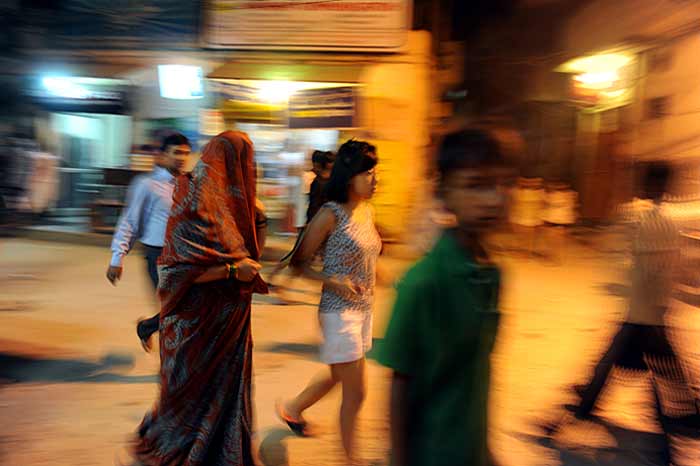 Krishna Nagar A young girl wearing short shorts walks past a fully ‘covered’ Jat woman on her way back from work in the narrow bylanes of Krishna Nagar, which is a primarily Jat and Gujjar colony in south Delhi.. (Photograph by Tribhuvan Tiwari)

The alienation they face goes much beyond name-calling and digs at their ethnicities and eating habits. Problems in finding accommodation seem to resonate the loudest. And it is not limited to just the college students looking for hostel accommodation but also professionals. “It took me four months to find an apartment when I first came to work in Delhi. I was often shown the door by landlords and even brokers warned us of certain areas and colonies that had low preference for people from the Northeast,” says lawyer Toshi Longchari. There have also been some serious incidents, like the case of Niang Mary from Manipur who was beaten up by her landlord in Gurgaon. Niang says her landlord forcibly entered her flat at 2.30 am despite being asked by both her and her flatmate to come back in the morning. “He assaulted us,” she says, adding, “We filed a criminal case but still have not got justice. I feel in order to change the mindset of people it’s not just the government that needs to take steps. I feel the judiciary too needs to issue strictures against those who discriminate.”

But it’s not all divisions. There are deep linkages in the experience as well. There are individuals who have establish themselves and even carve out a niche for themselves in the metros. Like Atsu Sekhose, a Delhi-based Naga fashion designer who has exhibited at India Fashion Week events. Rebecca Alemla Changkija, a Naga based in Mumbai, is another who overcame the travails of big city life to become a successful film producer. Having lived in the city for six years, she suffered through a regimen of harassment and eve-teasing, including one night when she and her sister found themselves up against three bike-loads of “lecherous men” surrounding, heckling and making sexual advances at them. “We should learn to fight back and speak up. If not, there will be more cases like Sangma and Loitam,” Rebecca says. Besides well-known successes in the fields of sport and entertainment, there are the smaller, less visible connections formed in less overt spaces: whether it’s synergic collaborations and friendships forged on college campuses or even in the personal sense. Marriage between Northeasterners and ‘mainland’ Indians is rare, but not unheard of. It’s just that the connections are often overshadowed by the breakages. 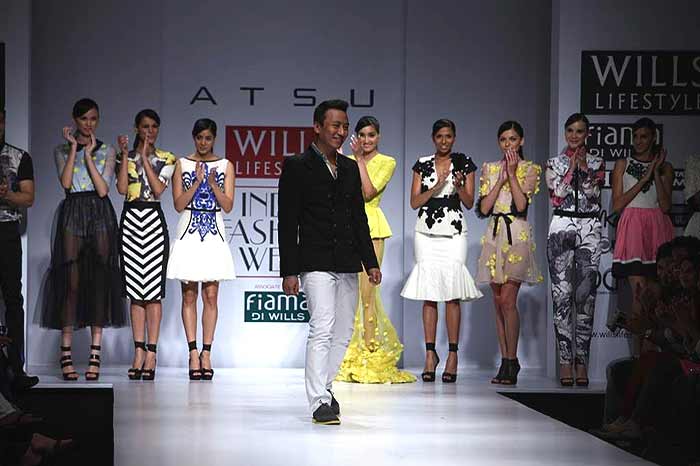 What is also often—and easily—overlooked, however, is how some people from the region too have ingrained prejudices that can manifest in a certain clannishness, which leads them to sticking only with members of their community both outside and in the Northeast. For instance, a Garo will tend to stick to other Garos while a Mizo will hesitate to mingle with a Naga. To think of the Northeast as a homogeneous, happy and harmonious stock, then, would be plain erroneous. And any assessment would be incomplete without taking into account the harassment of outsiders in the Northeast. Take the plight of the tea garden workers. Or the incessant delays that plague Shillong’s municipal elections because of indigenous opposition to the presence of “non-local”—this, despite having spent years in the region—candidates and voters.

When Ananta Dey, a local Bengali businessman, dared to challenge this blatant racism and went ahead to file his nomination in 2000, he was gunned down by suspected militants opposed to non-locals. “What if a Naga or a Manipuri, despite having lived in Delhi for 20 years, is denied the right to vote or contest an election? Imagine the ruckus it would cause, but the same thing goes unquestioned when perpetrated in the Northeast,” says Gajendra Upadhyay, an IT professional who was born in Shillong and lived there until he was 22. 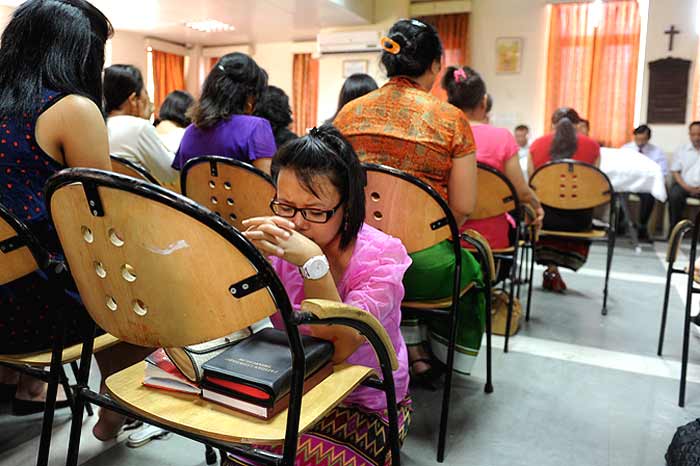 Mizo Church Churchgoers huddle together to offer prayers during a Mass gathering at Mizo Church in Mizoram House. (Photograph by Tribhuvan Tiwari)

Renedy Singh, currently the vice-captain of the Indian football team and a Manipuri, feels people from the Northeast should open up more to outsiders. “I really think we should mix more. That will make things a lot easier,” he says, adding that he always makes it a point to blend in with the teammates from outside the Northeast. Former chief election commissioner James Lyngdoh, who chose to live in Chevella in Andhra Pradesh and not back in Shillong where he hails from, agrees with Renedy. “One can understand them huddling together for security, but it can’t happen all the time. They really need to break up,” he says, adding that people from Shillong often pretend as though they have come to a “foreign land” when all they have covered is just a 100-odd kilometres’ travel to neighbouring Guwahati in Assam.

But there are encouraging signs that these walls are gradually crumbling and spaces, isolated for so long, are becoming more diverse. There was the memorable scene of a Mizo girl, decked in a puanchei, leading in the Indian contingent at the opening of the Commonwealth Games in 2010. Delhi and Bangalore have had recent openings of Northeastern restaurants like Nagaland Kitchen, North East Diner and Zingron. And the latest breach comes from the Shillong Chamber Choir, who have travelled all the way south to sing for forthcoming Malayalam film Goodbye December. They will sing in Malayalam.

In an earlier version of this article, The Mangalz were wrongly referred to as Mangalaz

We Are All Socialists