In a new docu, the showboy extraordinaire lets us in on his little known quirks 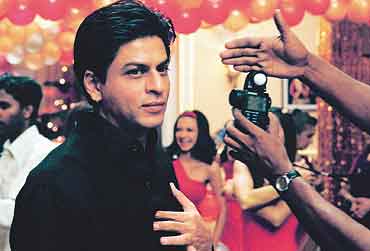 outlookindia.com
-0001-11-30T00:00:00+0553
Just when you thought there could be nothing more to know about the brassy bouncing superstar of Hindi cinema, along comes Hyphen Films’ The Inner World of Shah Rukh Khan, financed by the UK’s Channel 4. It literally takes you where no SRK fan has gone before—a whisper away from the hero’s innermost insecurities and fears.

In late April, Channel 4 will play host to three SRK films—Devdas, introduced by Sanjay Leela Bhansali; K3G presented by Karan Johar; and Chalte Chalte, brought on by SRK himself. The package will be accompanied by a set of four three-minute short films, each playing on an SRK song-’n-dance number and rather cheekily underlined: "Don’t say it, sing it in Bollywood."

But it’s the documentary that’s clearly special. In an era where stars endorse products as much as movies, spread as thin on the small screen as on 70mm and drip-dried by the media for every quote or pose possible, a Garbo-esque mystique is too much to expect. As Kabir herself admits, "Actors are like shop windows."

But her documentary shows there’s much more to the SRK fable than the masks he puts out for the world. The film tracks the star through seven days during which he chooses to unveil his invisible side, allowing access to his much-less-than-perfect life.

The film reflects his obvious glamour but doesn’t fall into the trap of celebrating it. "I wanted it to be a psychological portrait, one that gives the audience a feeling of having met the person," says Kabir. So what kind of a man is she introducing us to? The overarching image is of someone traumatised by a feeling of abandonment and separation, a man who lost his parents when he wasn’t yet 24.

SRK talks about his gregarious mother with whom he’d watch Dilip Kumar films on the VCR. "She worked hard for us and I tried hard to impress her...I wanted to be bigger than even 70mm and Cinemascope," he says.

He talks about his Peshawari father who came home one day and announced: "Yaara doctor kah raha hai mujhe cancer hai." He talks about his chronically depressive elder sister and faces up to his own fear of loss and death: "I am hyper, scared to the extent of being silly."

Acting, then, has been an escape from the unbearable sadness of being: "The only way I could avoid getting depressed was by putting on make-up and becoming someone else." Nowadays though it’s a bad back that troubles him: "I am so used to the pain, I don’t know what life would be without it. I just hope one fine day I’ll wake up to find that the pain is not there...." There’s a little boy in him who hopes even now that if he prays by his parents’ graves his pain will vanish magically: "I can tell mom to take it away."

Kabir’s camera remains intimate, but never voyeuristic in its journey through SRK’s pain. It does catch a glimpse of SRK’s ailing sister, for instance, but does not linger. It also makes him talk about many other things, like finding life again in an alien city.

In the initial phase of his struggle he used to be angry with Mumbai, with its small houses, cramped spaces and expensive things. He admits having shouted out into the sea that he’d own the city one day. "It was foolish of me...10 years down the line the city owns me," he says. "It’s the greatest city in the world." The city that finally gave him a home, a home that’s almost a fetish.

‘Mannat’ is SRK’s security, take anything away from him but not his house. It’s a house where rules apply, where his children recite the Gayatri mantra and also say Bismillah with him but actually enjoy celebrating Christmas the most, where he’s not allowed to receive any phone calls except in the bathroom. It’s a house where he entertains his filmdom friends, makes his kids think that the only profession in the world is making movies and that their dad is actually Aamir Khan!

Kabir’s SRK is largely philosophical. "Sometimes he says so much that the wisdom of his words gets lost," she says. But like any SRK movie, the documentary can’t help have its moments of khushi alongside the gham.

Like SRK’s habit of using nasal drops that an American disco thought was a drug. Like SRK declaring proudly that he belongs to the metrosexual generation: "I don’t mind looking pretty."

Or showing off an album of the different looks worked on him by his make-up artiste Ravi dada. There are SRKisms aplenty and that quick, delicious dig he takes at his peers even while talking about his own hairstyle: "All the others are losing hair!"

It’s Kabir’s first attempt at getting up, close and personal with a gen-now Indian filmstar. Having made seminal documentaries on stalwarts like Guru Dutt, Shammi Kapoor, Lata Mangeshkar and Amitabh Bachchan, she chose SRK not just because of his star stature but because she found him "interesting, charming, appealing, spontaneous, considerate, energetic..."

Perhaps it is the trust in SRK’s continuing star power, but for the first time the Indian market might see money in a documentary. There is talk of Mumbai-based distribution house Shringar Films releasing the film in the Indian commercial circuit alongside Main Hoon Naa.

Meanwhile, back in the multicultural mayhem of the UK, a Taiwanese friend who ardently believes that movies must begin and end with Tom Cruise can’t fathom why India needs a film industry at all. After all, there’s Hollywood.

I can’t explain, but there’s always Bollywood on the Net. I just show her some pictures of SRK as we surf. Only to find a mischievous glint creep into her impassive eyes: "He looks velly velly handsome."

This weekend she will watch Dil To Pagal Hai.