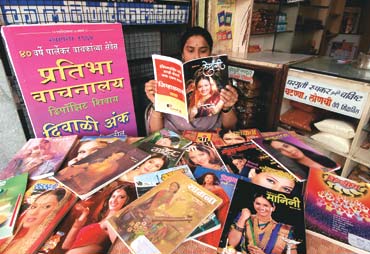 outlookindia.com
-0001-11-30T00:00:00+05:53
For the Sathe family in Mumbai's Vile Parle suburb, Diwali celebrations remain incomplete without the two typical Maharashtrian elements of the festival: the Diwali Ank—the special annual magazine issues—and the Diwali Pahat, or the ritual of an early morning music concert. Indeed, for millions of Maharashtrians, Diwali invariably means a slew of carefully selected Diwali Anks thrown in with the traditional faraal—basket of sweets and namkeen—and some wah-wah moments at a classical music soiree.

While the Diwali Pahat tradition resonates largely amongst middle-aged and older Maharashtrians, the Diwali Ank legacy seems stronger, attracting more readers with each passing year, though advertisers stay away. "We usually place our orders for Mouj, Akshar and a couple of other magazines in advance. The rest, we get over the next few months from our local library. This works the best because we have eight readers with different tastes in our family," says Abhinandan Sathe, 31, who remembers being introduced to literary stalwarts like Mangesh Padgaonkar, Madhu Mangesh Karnik and others from the Diwali Anks as his grandfather read them out to him.

The uniquely Maharashtrian tradition of publishing a magazine at Diwali time that offers articles, essays, short stories, poetry, cartoons and translations is now in its centenary year. Historical records show Manoranjan as the first-ever Diwali Ank, published in 1908. Initially, these magazines concentrated on literature—novels, short stories and translations—but the last 20 years have seen some turn more contemporary. They are now thematic in content, focusing on, for example, science and scientists. Some still boast the creme de la creme of litterateurs and poets, others have analytical writing on contemporary issues, or discuss a range of socio-economic issues, from divorce to malnutrition. Some stay more traditional, presenting a volume of recipes and look-good tips. Politics, politicians and public figures, of course, feature in many. Ruturang even featured profiles of Katherine Graham of the Washington Post and author J.K. Rowling! Two magazines this year discuss acclaimed filmmaker Ingmar Bergman. Though Mumbai and Pune remain the centres of publication and readers, libraries across the state pick up hundreds of Diwali Anks for circulation through the year.

This Diwali saw nearly 440 Anks, with an estimated circulation of about five lakh. The top-notch ones like Mouj, Akshar, Dipotsav, Deepawali, Sadhana, Shabd, Nav Manoos circulated about 50,000 copies each. Other independently-owned ones circulated in the region of 20,000 copies each, while those brought out by news media organisations sold upwards of a lakh. Well-known publishing houses and retail outlets like Majestic or Ideal Books offer a pre-determined set for a bargain price, usually booked a month ahead of Diwali, and home-delivered during the festival. Says Milind Nerurkar of Ideal, "The last few years we've seen a surge of interest and spending power, though prices are now between Rs 50 and Rs 125 for a mag."

While veteran publishers rue the lack of professionalism in presentation and cite it as a major reason for big-ticket advertisers staying away, others say that the unchanging formula of the Diwali Ank helps retain its market. But this market may be shrinking because the magazines largely discount the youth—there's little to hold the interest of those in their 20s. Says Meena Karnik, editor-publisher of Akshar, now in its 26th year: "Our issues spoke of Deorala sati and Punjab terrorism back then, but there's still a section of publishers that believes in putting a beautiful woman on the cover and offering kitchen tips. If we don't make efforts soon to attract younger readers, Diwali Ank may lose reader base in the next two decades. " For now, however, many Maharashtrian households look forward to the Diwali Ank providing them their reading matter for the year ahead.