The Ink Is Still Wet 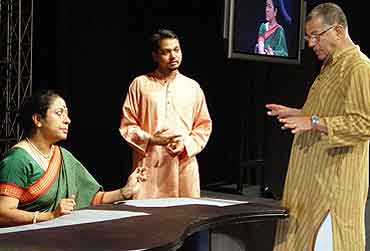 outlookindia.com
-0001-11-30T00:00:00+0553
It's been over 35 years since Girish Karnad last directed a play. But these days, Karnad, one of India's pre-eminent contemporary playwrights, is in command again at rehearsals in Bangalore for his new one-act play, Odakalu Bimba in Kannada and A Heap of Broken Images in English.

The play is an attempt to examine the soul of an Indian writer caught in a global current, a comment on writers who make news with those huge, undisclosed advances that foreign publishers allegedly pay them. It has a single character, a woman writer, and is set in a TV studio. It's prime time and she is speaking to a TV audience about her writing process, the newly earned international acclaim.

"I decided to direct myself because, unless carefully done, it can fall apart," says Karnad, tension evidently rising as he watches the final dress rehearsal. The last time he directed was in 1969, when he was still working with Oxford University Press, with Madras Players' Evam Indrajit, by Vijay Tendulkar. He's directing this play for an in-house production at Ranga Shankara, a new theatre set up by veteran film and stage actress Arundhati Nag.

In the few unintentional intervals (caused by technical glitches), Karnad describes the play's genesis. He recalls a conversation with novelist Shashi Deshpande on the charged encounters between regional language and English writers at a literary retreat in Neemrana a couple of years ago; and back home the outbursts of fellow Kannada writer U.R. Ananthamurthy against Indian English writers. "(He) even said Indians writing in English were like prostitutes since they wrote with an eye on the money and global reach the language offers. There was also this interesting book I read by Vijay Nambisan, Language as an Ethic. There's a personal angle too: my wife, a Kodava/Parsi, could not speak or fully comprehend Kannada till recently and therefore at home it was always English, although I am a Kannada writer whose mother tongue is Konkani. So I started wondering about the role of the languages that surround me, especially English."

The dilemma Karnad envisions won't just intrigue a pan-Indian audience, it's also somewhat of a response to a long-standing accusation against him. The local Kannada literary scene argues that Karnad straddles the pan-Indian literary space both thematically and also in a literal sense, simultaneously releasing his plays in Kannada and English. He admits he needs a larger canvas to write, and that he is very different from, say, P. Lankesh, a contemporary Kannada literary giant.

The play's lone character, Manjula Murthy nee Naik, is a Kannada short story writer who has crossed over to English and written a best-selling novel. Her lines resonate with the debate. "I am accused of having turned my back to the Kannada language, but my publisher's letter from the UK says my work is filled with the smell of the soil." So is this play autobiographical? "In some ways...we dig into ourselves when we write," says Karnad.

But why wait so long to write a contemporary play? Karnad puts it quite simply, "I could never invent a plot. It was also a conscious decision to write historical plays, because till then it was all costume dramas. Also, people like Vijay Tendulkar were doing a competent job with social plays so I didn't want to dabble with it. This play compelled itself. Technology has such an impact on our lives that I wanted to show the public mask we keep; that's why the play is set in a TV studio. " In fact, Karnad subverts the classical technique of the mirror speaking as the alter ego and gets the protagonist's TV image to have a dialogue with her—which is when the play's most startling revelation emerges.

Unlike Karnad's earlier plays, which have a big canvas and appeal to audiences across the board, this play highlights the very particular world the writer inhabits, and hence may have a rather specific appeal. "If that happens, it's okay," says Karnad, and adds a quote from T.S. Eliot's The Wasteland, the source of the title for the English version of the play. He worked backward for the Kannada one....What are the roots that clutch, what branches grow/ Out of this stony rubbish? Son of man/ You cannot say, or guess, for you know only/ A heap of broken images.