The Infallibility Of Sage Advice

In Ayodhya, both sides are miffed over the Kanchi seer's non-localised efforts Updates 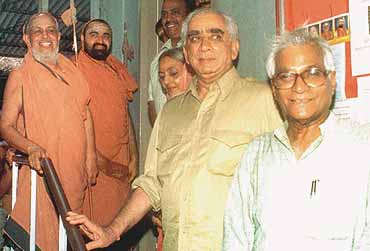 outlookindia.com
-0001-11-30T00:00:00+0553
The Kanchi Shankaracharya, Jayendra Saraswati, has achieved the impossible in Ayodhya. The two warring sides—both the Hindus and the Muslims—in probably the most infamous and protracted property dispute in India are suddenly speaking the same language. The message they're jointly sending out to the seer: keep off Ayodhya!

The media circus that started soon after the Shankaracharya made overtures to the All India Muslim Personal Law Board (AIMPLB) didn't amuse the sant community or local Muslim groups. Both sides braced themselves for throwing out the "outsiders"—the Board and the Shankaracharya. The actual claimants to the disputed land have now decided to add to the din. After having struggled alone in a legal labyrinth for over 40 years, how could they let others interfere?

Mahant Bhaskar Das of the Nirmohi Akhada along with counsel Ranjit Lal Verma are the first claimants to the disputed land to come out openly against what they perceive as the seer's attempt to keep them out. In a letter dashed off to the seer on June 25, Das condemns attempts to "force" negotiated settlements on the actual parties to the title suit.

Questioning the locus standi of both the seer and the AIMPLB, Das says: "Isn't it important to start any such dialogue at the local level? Don't you think it's necessary to involve the parties who have been fighting for their claim for such a long time? Can any settlement be thrust from the top?" Das demands that the Shankaracharya and the AIMPLB organise a meeting with the original claimants in Ayodhya at the earliest. Any such initiative, he stresses, has to start from where the dispute actually exists.

Nobody could have agreed more with Das than Hashim Ansari, the claimant from the Muslim side. Along with the Central Sunni Waqf Board, Hashim is a prime contender for the disputed land. And if a negotiated settlement is to be reached, he'd rather do it locally. "What is the meaning of settling this dispute from Kanchi and Lucknow? We have been trying to settle it legally for the last 40 years. Now suddenly someone wants to thrust a solution without even informing us. Nothing can be done in Ayodhya without our involvement," says Hashim.

Both Hashim and Ranjit Lal Verma may feel left out but the sants of Ayodhya have no delicate compunctions in expressing it. They simply want the Shankaracharya out and say so in no uncertain terms. "Who is this Shankaracharya? He is not even among the four main Shankaracharyas. He is not even a Vaishnavite. He is a Shaivite. Why doesn't he build a mosque in Kanchi Kamakoti peeth? Why is he meddling in this? What's his interest?," asks Mahant Ram Vilas Vedanti of the Ramjanmabhoomi Nyas.

Vedanti was among the 60-odd sants who met in Ayodhya on June 24 to collectively "condemn" the Shankaracharya's move. Backed by a still smarting VHP, the sants alleged that an "unacceptable deal" is being struck between the seer and the AIMPLB. "We will build a temple at the Ramjanmabhoomi even if Lord Ram says he was not born here," Vedanti declared at the meeting.

Others directed their rage at the Shankaracharya, even going to the extent of calling him a "BJP stooge". Mahant Jugal Kishore of the Ramalaya Trust, of which the Kanchi Shankaracharya is also a member, alleged the seer is busy "paving the election ground" for the BJP. "The Kanchi Shankaracharya is not consistent. He can become secular, communal, indifferent depending on what the situation demands. All these negotiations are done to make money," Jugal Kishore said.

Meanwhile, the AIMPLB is facing its own share of flak. Many sections of this 51-strong body have misgivings about the negotiations, even though officially it hasn't even started. The AIMPLB is to meet in Lucknow on July 6 to discuss the proposal.Most members, however, feel a judicial solution is the only way of sorting out the Ayodhya mess. As Begum Naseem Iqtidar Ali, the lone woman member of the Board, put it, "What is there for us to do when the court is deliberating over the matter. We should wait for the court verdict," she says.

Legally speaking, the AIMPLB has no authority to issue a no-objection certificate desired by the Shankaracharya for constructing a Ram temple on the acquired land around the disputed site. The right, title and interest vests in the central government as per the Acquisition Act 1993. The SC has passed an order to maintain status quo at the acquired area.

The observers appointed at the excavation site by the Allahabad HC and legal experts feel the Board shouldn't even consider a proposal that has no mention of a mosque in the area. "The Shankaracharya says the disputed site will be protected. Are we to assume that we will get to construct a mosque there if we win the title suit? And forget the title suit, the Acquisition Act clearly envisages the construction of a mosque as well as a temple in the area. When there are legal and democratic options being provided to the Muslims, why are we settling for so less? All these attempts are being made because we are now unearthing a mosque under the Babri Masjid. There was no temple there," says an observer at the excavation site.

The time for the Archaeological Survey of India (asi) to submit its final report on the excavations is approaching. From what team members have concluded, it is clear the report will make a mention of a structure underneath the debris of the Babri mosque without committing itself to what it actually was.

While leading archaeologists such as Suraj Bhan, appointed to survey the site by the Allahabad HC, have openly declared that the underground structure was a mosque that was extended to build the Babri mosque, the asi has been claiming that "pillar bases" have been found which could imply the presence of a temple. The counsel for the Central Sunni Waqf Board, Zafaryab Jilani, maintains the attempts to find a negotiated settlement are a result of the fact that the asi has not been able to find a temple underneath. "Even the mehrab (arch) of the previous mosque has been found. We may have to wait for another year or two for the court's verdict on the matter. But I have full faith in the court's ability to sift out the truth. Why should we settle for anything else in such circumstances?" asks Jilani.

The AIMPLB's problem is they cannot be seen to be taking too rigid a stand. Board spokesperson Maulana Sajjad Nomani says Muslims sincerely believe the court will do justice to them. "But we can't discourage the dialogue route if democracy is to flourish in India. We believe in the judiciary and respect the Shankaracharya. Any settlement that ensures peace and justice is welcome. Rest will be decided at the meeting on July 6," says Nomani.

Insiders say the AIMPLB is not going to come to any decision on the Shankaracharya's proposal on July 6. Despite misgivings about the Board's earlier decision to receive the seer's proposal, the executive members feel the Board will try not to outright reject the proposal. "They can say that we are seeking opinion on the matter or even form a sub-committee to deal with the proposal. They can even make their legal position clear on the Ayodhya matter. But as a representative body of the Muslims, they cannot reject it outright," says a Board member.

The Shankaracharya has also opened channels with some local Muslim leaders in Ayodhya. "We want the whole area to be declared a holy land where both Hindus and Muslims have rights of worship," says Khaliq Ahmad Khan of the Helal Committee. Ranjit Lal Verma too feels a settlement is more likely if local Muslims get involved.Anyway, if everything else fails, the courts can still be relied on to keep deliberating the Ayodhya tangle.

Something To Take Offence?