Iran's permanent representative to the IAEA on India's vote and their own stand-off with the United States which in turn is clouding the Indo-US nuclear agreement. 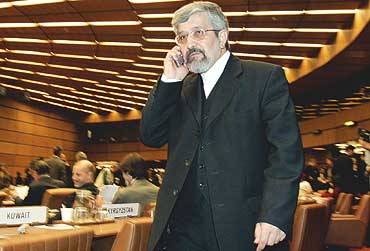 outlookindia.com
-0001-11-30T00:00:00+0553
Ambassador Ali Asghar Soltanieh, Iran's permanent representative to the International Atomic Energy Agency (IAEA), is a nuclear physicist by training. He combines an expert's grasp of the subject with a nationalist's passion to assert Iran's right to conduct N-research. He discussed India's vote against Iran and their own stand-off with the United States which in turn is clouding the Indo-US nuclear agreement. Excerpts from an exclusive interview with Seema Sirohi in Vienna:

How did you react to India's vote to send Iran's dossier to the UN Security Council?
There are deep cultural ties between Iranians and Indians. We have tried to strengthen relations and have never permitted anybody to create misunderstandings vis-a-vis India or Pakistan. This is the reason why we are following the gas pipeline from Iran to Pakistan and India. We call it the peace pipeline. We are not giving slogans. We are doing what we believe in. We are proving to the world how much importance Iran attaches to bilateral relations with India and Pakistan, how much attention we pay to peace in this region.

We, and many others, were surprised by India's vote. At the same time, we tried to show self-restraint. We, of course, criticise our Indian friends because we were not expecting this. And this happened when the Non-Aligned Movement (NAM) had a statement reiterating that this issue should not go beyond the IAEA. Therefore, to have some NAM countries vote for the resolution was itself a contradiction. India is a founder of NAM. India takes very principled positions. Many countries ask for and respect India's positions and that is why we were unhappy. Still, that has happened...we put it aside. But we didn't expect it.

The Iran crisis has cast a shadow on the Indo-US nuclear agreement. What is your view?
We, and other countries, follow the news of India-US nuclear collaboration closely. It is, of course, up to each country and their bilateral relations. But as far as the issue of the NPT is concerned, this (the Indo-US deal) raises a question. It is is not one addressed to India but to the illogical, unjustified US foreign policy. While the Europeans and the Americans insist on the universality of the NPT, this decision (Indo-US deal) cannot be justified. We are not questioning the Indian decision. India has been honest since the beginning in declaring NPT a discriminatory treaty. Our criticism is against those such as the United States—whatever they declare is completely different from how they act. The international community can't trust them.

Some ambassadors and IAEA officials ask for more transparency from Iran.
You can check with the people of the world—the majority sympathise with the Iran issue. What they sent to the UN Security Council is about voluntary measures which were suspended, which are non-binding. We voluntarily suspended activities three years ago, but we can't continue to do so for more than that. Under the safeguards agreement, we didn't have any legal obligation to inform the IAEA about the uranium conversion facility in Isfahan or the enrichment facility in Natanz.

Why isn't the IAEA giving Iran a clean chit?
Unfortunately, the results of samplings from centrifuge machines showed contamination of uranium particles. This was the turning point. We declared that it is from outside. But the US made it a political issue and put pressure. They and the Europeans should have given us a chance, so that in a quiet, technical atmosphere, analysis could be done. But at each session, they made a noise at the IAEA, each session, they passed a resolution. After the IAEA study in June '04, ElBaradei (IAEA director-general) reported that this contamination has a foreign source, and therefore Iran's assertion is correct. The issue should have been immediately removed from the board agenda. The public has been misled by the Americans' dishonest approach to the facts and figures. Many just follow the US media.

Does the media contact you often?
Even if they did, they did not reflect our position. I have put many documents on the IAEA website but we are not quoted in the western media.

How is the IAEA dealing with Iran?
Unfortunately, with the resolutions the IAEA went beyond its statutory mandate, beyond our legal obligations. Iran was the only country implementing additional protocols to prove transparency. They are trying to find out what happened years ago about the buying of some components. Any country can buy any equipment, the only thing is certain materials should be reported to the IAEA. And now the US has given another baseless open source information. You remember the laptop issue? Anybody in the world can bring a laptop and say, 'I have some information.' Fabricated information. They want to keep the agency busy.

But Russia too asks why Iran must have a fuel cycle.
As of today, there exist no internationally adopted, legally binding instruments for assurances of N-supply. There is no guarantee of bilateral supplies. After seven years of negotiations in Vienna on preparing a document, there was total failure in 1987. Had they not made this mistake, developing countries like Iran could have then had (not now, because it's too late) assurances of supply, and the situation would be different. Iran decided to go to the indigenous fuel cycle around the same time after we were sure there was no hope for supply assurances. We don't have an assurance of supply for 10 years from the Russians for Bushehr. We only have a contract for the first year.

India too is worried about fuel supplies.
I prefer not to comment. I can only comment on how parties to the NPT look at this matter. Personally, as a nuclear physicist—why not? I don't see any problem in India going for nuclear power. You have the richest thorium in the world.