Celebs put their strength behind citizen's movements to mobilise voters 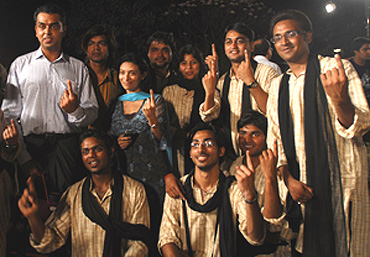 In September 2008, Janaagraha, a Bangalore-based NGO, in partnership with Tata Tea, kicked off with Jaago Re! One Billion Votes, a voter registration drive spread across 37 cities. Its powerful ad delivering a "wake-up call" to non-voters ("If you haven't been voting, then you must have been sleeping") succeeded in motivating 5,47,851 people (at the time of writing) to get registered as voters on its site jaagore.com. As the elections draw closer, the Jaago Re! initiative has got fresher and edgier, with a series of music concerts by the Bangalore rock group Thermal and a Quarter in five cities, and a music video by the same band, directed by Rani Jeyaraj, exhorting people to "Shut Up And Vote". An animation film by Aloke Shetty on citizen participation in democracy has also been urging people to "use your finger, register to vote". 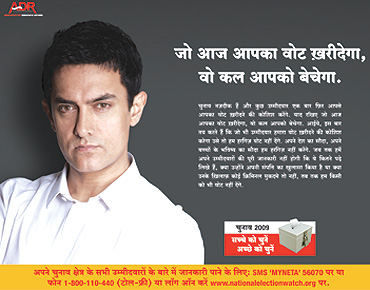 In a parallel effort, the Association for Democratic Reforms (ADR) is asking people not just to vote, but make an informed choice. Aamir Khan (who, incidentally, has also been asking people to step out and vote in the Times of India's Lead India campaign) is the face of ADR's multi-lingual campaign, "Sache ko chune, Achhe ko chune (vote for integrity, vote for good people)".

The Ahmedabad-based NGO, founded in 1991 by IIM and NID professors, focuses on electoral reforms. Thanks to its efforts, it is now mandatory for candidates contesting elections to Parliament and state legislatures to declare their financial and educational background, and come clean on criminal records. Since affidavits containing this information are filed by candidates barely 10 days before the poll, National Election Watch, a 1,200-strong NGO network of which ADR is a part, has taken on the task of disseminating these details so that they reach voters on time. All you need to do is to call a toll-free number (1-800-110-440), send an SMS or log on to nationalelectionwatch.org. "We spend so much time picking the right vegetables, we go through hell fixing up the marriage of our children but don't put even one-tenth of that effort in picking our leaders. We need to be attentive and involved citizens," says Aamir, explaining the message.

Election watch sites—smartvote.in, MumbaiVotes, whypoll.com and janjagran.co.in—have come to life in cyberspace in the runup to election 2009, including the caustic bleedindia.com, that lampoons corrupt leaders who have bled the nation. Prominent citizens like former chief justice J.S. Verma are also out there with petition campaigns urging political parties to deny tickets to tainted politicians and appealing to citizens, especially youth, to not vote for corrupt candidates. "Things are getting grimmer but no outside force can bring about a change. We can't crib in our drawing rooms. We need to shed cynicism, think positive and take action," explains Justice Verma.

The dream factory has bought into that message as well, and is busy projecting voting as sexy, cool and the in-thing. The brand ambassador for utv Bindass channel's Ungli Utha Bindass, which promotes this message, is no other than John Abraham. A host of young stars, including Aamir's nephew Imran Khan, Ranbir Kapoor, Priyanka Chopra and Abhishek Bachchan, have participated in a social message commercial produced by filmmaker Karan Johar. Directed by Tarun Mansukhani, written by Niranjan Iyengar with music by Salim, the campaign appeals to the youth to step out and vote. "Our vote will decide the way our country goes in the next five years," says Karan.

While Aamir maintains his drive is aimed at every voter, irrespective of class, other campaigns are openly pitched at an urban middle class widely perceived to be apathetic, and especially young and first-timer voters. According to Bindass, 30 per cent of the voting population is within the 18-30 age group, but only one-fourth of these voters are registered, and among those registered, only 50 per cent vote. "We're the youngest nation in the world. What kind of a government and politicians will we have if only 12.5 per cent of the youth votes," says Zarina Mehta, CEO, Bindass.

Janaagraha has a similar estimate—that only about 15 per cent of the 300 million voters in the 18-30 age group end up voting. "We want to inform them that voting is a right they need to exercise," says Sharat Potharaju, head of communications, Janaagraha. Jaagore makes it easy for them to register, not only providing a downloadable registration form on its site, but also providing directions on where it can be dropped off—in 37 cities.

The reasons for this activism are not hard to seek. The Mumbai attacks left the educated elite emotionally charged and overtly cynical of politicians. "There is a feeling of angst and negativity. But the idea is not to keep it within. Not caring is not cool anymore. Being laidback is passe," says Karan. "All of us have been feeling the need for reforms, a need for better leaders and the need to be actively involved with the political system," says Aamir. Many say 26/11 led to the realisation that you have to be part of the system to be able change it. "It made us realise that voter apathy cannot take things forward. The idea is to stop cribbing and start voting; to bring forth the political leadership you want," says Potharaju. "If you don't vote, how can you care for your country? The least I can do as a citizen is vote and choose the correct leaders," stresses Aamir.

These civil society campaigns have also been influenced by the American elections and Obama's victory, with its message of positive change. "It was the Yes We Can slogan that defined the American elections. What it says is that the remedy is in our hands, it's in the hands of the voters," says Justice Verma.

The campaigns have succeeded in catching public attention and approval. But will many more fingers be sporting the tell-tale black marks, as a result? Will fewer candidates with criminal records be elected? The results of election 2009 will reveal the success or failure, not just of political parties and candidates, but also of citizen's campaigns.