Godhra's over, it's the state now. And Narendra Modi throws himself headlong into election mode. 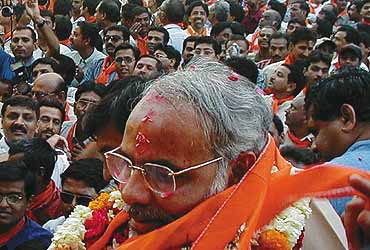 outlookindia.com
-0001-11-30T00:00:00+05:53
There are times when what Narendra Modi says about normality having returned has some visible proof. Life is back in Ahmedabad. Cars, cows and asses are on the main road and as before, only the asses observe lane discipline. There are boys in cybercafes. Pretty girls are up and about. And at the Chinese Corner, someone is adding jaggery in the Manchurian. Even the refugee camps have mostly vanished. Of the over 70, only 10 are left in which there are only 25,000 people. They too have been asked to go back home for, don't they know, normality is back in Ahmedabad! Without "normalcy" there can be no elections. And Modi wants elections. Very soon.

As part of the state government's efforts to build "normalcy", even the existing 10 camps are being pressurised to shut down. Says Ataullah, a coordinator of the camp in Dhariyakhan Ghummat: "The government aid has dried up. We survive on the Rs 5 per head per day that some NGOs give. These people have no homes to go back to. They will be here for some time. And of course they will not be able to vote. Just like others who left the camp to migrate to safer parts of Gujarat and those who quit the state forever." There were over 6,000 people in this camp. Now there are about 2,500.

If seeing is believing, then ophthalmologists will be philosophers and security advisors. From being a ghost town, Ahmedabad may have returned to its urban chaos. But scratch the surface and the fresh paint comes off. If Ahmedabad were normal, would the police, after an internal assessment, have requested the establishment to cancel the 300-year-old tradition of the Jagannath Rath Yatra? Since it wasn't, there will be over 5,000 police personnel and paramilitary forces flanking the divine procession on July 12. If there was normality, the way an election commission would look at it and not Modi, why haven't all those Muslims who were asked to leave their camps not gone back to their homes? Why have many of them gone to Andhra Pradesh, Karnataka and Orissa? If the Modi government has done its job, why has the Qaumi Relief Committee written a letter to the PM saying that Modi's grand compensation of Rs 4,600 for a house totally destroyed in the riots is laughable?

People close to Modi say he may dissolve the house in July and tell the Chief Election Commissioner that nothing stops him from conducting elections in October. Modi has already begun clearing the cobwebs, to ready his establishment for the mother-of-all assembly elections. He met his IPS officers and told them all was well and if it wasn't, then it was because they had failed in their duty and allowed "mini-Pakistans to be created in Ahmedabad". So in a city which is limping back to "normalcy", there will be a divine procession—the Jagannath Rath Yatra—which Modi himself will receive at one spot. A few days before this occasion, the chief minister will trigger off another spectacle.

He will travel on another chariot, to reach out to some 60-70 lakh Gujaratis across the state between July and August and tell them that he has been wronged by people who have always been against state like say, the Congress. In this, the Gujarat Gaurav Yatra (see box), Modi will remind the people about "the glory of Gujarat" according to concept coordinator Vijay Rupani. Three days of the week, Modi will travel in his chariot and hold forth. On the other days, he'll be back in his Gandhinagar headquarters.

"A lot of misconceptions have to be cleared," says Rupani". When Sonia Gandhi came to Porbandar and said that this is not Gandhi's Gujarat but Godse's Gujarat, it hurt the collective conscience of five crore Gujaratis. The Congress has historically been unkind to Gujarat. Right from Nehru, who sidelined our great leader Sardar Patel." Now the man who is also called Chhota Sardar will stop at every vantage point to tell his people that of the four natural disasters and one man-made one, the BJP government has managed to handle every crisis well.

America has publicly said that the debris of the World Trade Center will take two years to clear," says Rupani. "We have cleared the earthquake debris much faster." This will be the tone and substance of Modi's long journey. The BJP will peg its campaign on "good governance", according to Harin Pathak, a minister in Modi's cabinet. "Hindu awareness is a cultural movement that organisations like the VHP are in charge of," he says, pointing warmly to Praveen Togadia who is sitting in the airport lobby with him. "The BJP's priority in Gujarat is only governance."

It's this case for good governance that Modi has already started to build. As part of this is an idea that Mohammed bin Tughlaq (known for bizarre schemes including minting leather coins to create wealth) will call his own. After failing to get the Narmada river to the parched Saurashtra where water has drowned some political fortunes, Modi has lifted water from the Mahi river, channelised it through the empty canals meant for the promised Narmada water and told people he has finally brought "Narmada maiyya" to them. From his Swaraj Mazda rath, Modi will also tell people that the BJP has built 20,000 check-dams, 35,000 classrooms and created 55,000 primary schoolteachers.

The campaign script has already been written. A few days ago, Modi announced a plan to employ between 90,000 to one lakh youth from the 18,000 villages in the state. This means about five young men from every village. Nobody is very clear about what their jobs will be. The BJP says the youth will ensure that "the proposals of the government are implemented in their villages". Last- mile enforcers, apparently. But they will have the jobs only till February 2003, or the time when the government's tenure ends.

The Congress, of course, views this scheme with a lot of suspicion. Says Congress MP Pravin Rashtrapal: "The job profile is not very clear. This means jobs will be given to those from the rss and Bajrang Dal cadres who'll eventually sit in the election booths. That's what this whole thing is about."

The Congress wants the elections to be held as late as possible. In private, its leaders admit that the BJP's organisational skills are exceptional and that the Congress in Gujarat is so short on ideas and committed cadre that it can't conduct a college festival without messing it up. Though the BJP lost two by-elections after Modi took over, post-Godhra, the Congress admits the wind has changed.

WHat's equally true is that the BJP's fate hinges on how much its internal strife spills out. For a man who has no caste base, Modi has bravely antagonised the four pillars of the state BJP—Keshubhai Patel who is the lord of Saurashtra, Kanshiram Rana who controls the OBCs and south Gujarat, Suresh Mehta who rules over Kutch and has the support of the affluent industrial section and Rajendrasinh Rana who has the support of the Kshatriyas who have traditionally coexisted peacefully with the minorities, sometimes even coming out with licenced guns to protect them.

But even though Modi has trouble at home, the Congress, say some, is so disorganised that only the total involvement at the helm of a man like Shankarsinh Vaghela can shake the BJP in the next elections, though he too has a hardly higher claim to heaven than Modi. Says he: "I built the BJP. I know the fellows out there now. They were counting votes when people were dying. That's their basic mentality. And now they are driving the Muslims away."

In one of the refugee camps in Ahmedabad, people say that those who have left the camps have left Gujarat for good or were staying with their relatives who live in relatively safer areas.Either way, they will not be able to vote in the next elections. Nor will those who have stayed on in the camps. And there will be many booths that will be right in the middle of a predominantly Hindu area where Muslims will dread to go. When contacted, Gujarat Chief Electoral Officer Gurcharan Singh said he didn't want to comment on the issue.

The fear of the VHP is still palpable in the relief camps. But the VHP says it will not be involved in the election campaign. According to Togadia, the VHP will merely, "create an awareness". But in many ways, he says mysteriously, "our job is done". To understand this message, it helps to listen to a non-political hotel owner who is a very bright man during working hours. He whispers that there is a tunnel in the Muslim-dominated Juhapura suburb "and it runs till Delhi". He heard about this longest tunnel perhaps in our planetary system from "a few friends who heard about it from other friends".

Welcome to the mother of all campaigns.

Everything is custom-made in this school for its special students