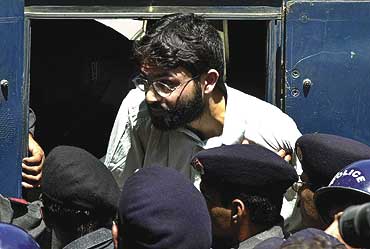 outlookindia.com
-0001-11-30T00:00:00+0553
It's early morning of July 15 and the Central Prison of Hyderabad, Sindh, is bustling with cops. It's here the anti-terrorism court of Justice Ali Ashraf Shah is to deliver the verdict in the sensational Daniel Pearl murder case. There are armed guards atop buildings and police jeeps zip around, patrolling the vicinity. A government aircraft has earlier brought chief prosecutor Raja Qureshi from Karachi. Officials are edgy, warned as they had been through a spate of anonymous e-mails about retaliation against a death sentence for the accused.

At around 10 am, the accused—Omar Sheikh, Sheikh Adil, Salman Saquib and Fahad Naseem—begin to walk to the makeshift court. Some 2,500 prisoners, locked in their cells, wave at the quartet. Soon their slogans rend the air in solidarity.

At 10.30 am, Justice Shah calls out Omar Sheikh's name, asking him to stand. He reads out the verdict: it's a death sentence. Omar smiles at the judge and sits down. Justice Shah names other accused, one by one sentencing them to life imprisonment. When he leaves the court, Sheikh Adil's brother Aslam bursts out shouting, "You all are agents of Jews. This is no justice."

Omar's father, Ahmed Saeed Sheikh, is stoic. He walks over to his son, hugs and kisses him. "Baba," says Omar, cool and assured, "nothing will happen to me. You just take care of your health." Perhaps thinking his father is still perturbed, Omar continues, "Baba, you know I'm not scared of death. No one can stop me from going to the gallows if it's destined. Matters of life and death are in the hands of Allah." They then meet for an hour in another room, in the presence of intelligence officials. On the way to his cell, Omar tells his escort, "I did not kill Pearl. But I don't regret his death because no one sheds a drop of tear when someone is killed in Kashmir or Afghanistan or Palestine."

The verdict in the Daniel Pearl murder case was public minutes after it was read out, surprising none. Least of all Omar's father Saeed Sheikh, who told Outlook: "I'm not surprised at the verdict. The judgement was announced by President Pervez Musharraf even before the trial began, when he stated that he wanted Omar hanged. The verdict only implements the president's wishes."

The refrain of religious parties, too, is predictable: Musharraf wanted Omar hanged because of intense American pressure. Jamat-e-Islami (JI) chief of the Sindh province, Asadullah Bhutto, remarks: "Justice hasn't been done to Omar only because the Americans would get angry." The Muttahida Majlis-e-Amal (MMA), an umbrella group of religious parties, plans to make Omar an issue in the October polls, neatly dovetailing the verdict as yet another instance of Musharraf kowtowing to the Americans. Says JI deputy chief Ghafoor Ahmed: "The next elections will be between the pro-US and anti-US forces."

As lawyers of the accused prepare to battle it out in the high court, analysts feel the defence would harp on the absence of the dead body in a murder case, as also the fact that Pearl's wife, Marianne, did not depose in the trial. Some feel the case could even go for a retrial if the DNA tests on the dead body, recovered from the outskirts of Karachi in April, offer any counter-proof.

Omar's conviction has aggravated the problems the Sindh police encounter in their battle against terrorism. Omar is to the Jaish-e-Mohammad and Harkatul Mujahideen what Mullah Omar is to the Taliban. This has given rise to apprehensions of suicide bombings rocking Karachi, once again, to avenge Omar's conviction. His own statement to his lawyer Rai Bashir—"They have awarded me death sentence but let's see who will die first"—has the police on tenterhooks. Equally perturbing is an e-mail from Asif Ramzai, who carries a reward of Rs 3 million on his head: "We'll soon strike and punish Musharraf and his agents."

Senior police officials haven't been quick to rubbish such threats. As a senior officer told Outlook: "Detained militants have told us that there are suicide bombers in Karachi. They may not belong to Omar's group but respect him immensely." In the last three months Karachi police have arrested 300 militants and recovered at least five cache of explosives, similar to what was used in explosions that killed French nationals and in the attack on the US consulate. What worries police officials is that the militants, in their quest to prove a point to Musharraf, could undertake yet another daring attack.

Get Your Glossary Right