Is tourism ruining the sanctity of Goa’s holy places? Or are liberal ways on the wane? 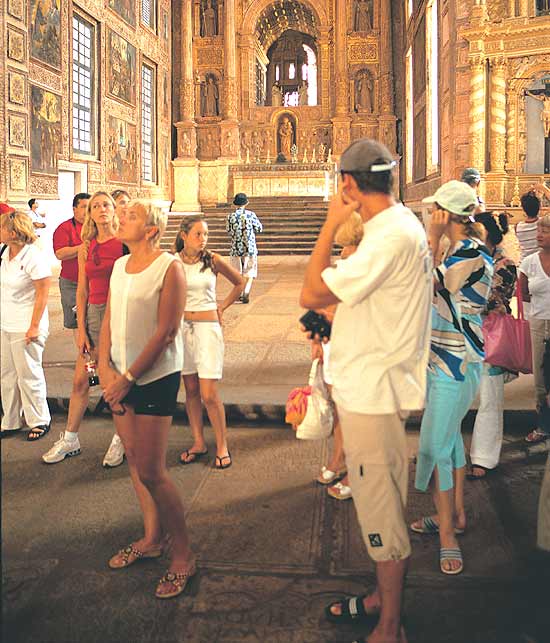 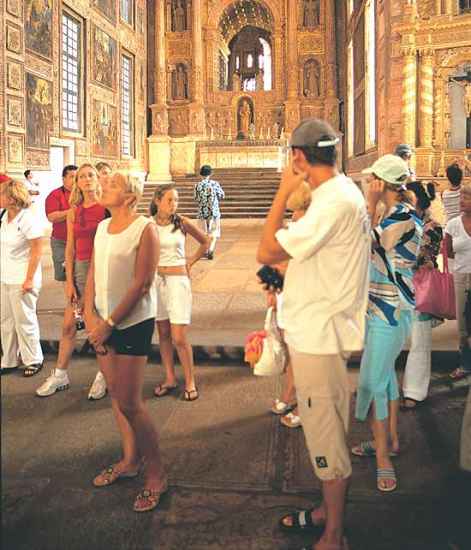 On a Sunday morning, the sprawling grounds of Bom Jesus Basilica in Old Goa looks more like a flea market. A busload of tourists has just emptied, people mill around in the majestic central hall, the cameras are clicking away. The serious churchgoers on the pews try not to get distracted as a young tourist walks in—clad in a mini-skirt and tank top. Micro-minis in a church? “We were going to the beach but ended up taking a detour here.”

Well, the casual tourist can shrug it off (‘casual’ is the operative word) but Goa’s religious institutions are now saying enough is enough. “A dress code is too harsh a label for what we have in mind. But some decorum has to be maintained,” says the rector, Father Savio Barretto. “We’ll provide shawls at the entrance for people dressed inappropriately.”

The Shri Mahalasa Narayani temple at Mardol, 25-odd km from Panaji, hasn’t been so coy about what it thinks is appropriate. Last April, they put up a signboard, ‘Entry restricted for foreign tourists’. Other temples, like the famous Mangueshi, have started insisting that visitors come in properly dressed. Temple president Jayant Mandurkar makes it clear that appropriate dress is a must for both foreign and domestic tourists.

So is there some sort of a neo-conservative revival going on, is Goa’s carefree, carnival image at risk? Don’t overread it, says Girish Agni, a Panaji-based businessman, who’s visiting the Shantadurga temple at Ponda. “The dress code is no right-wing conspiracy...it’s just better that the minimum sanctity of a place of worship is maintained,” he says. 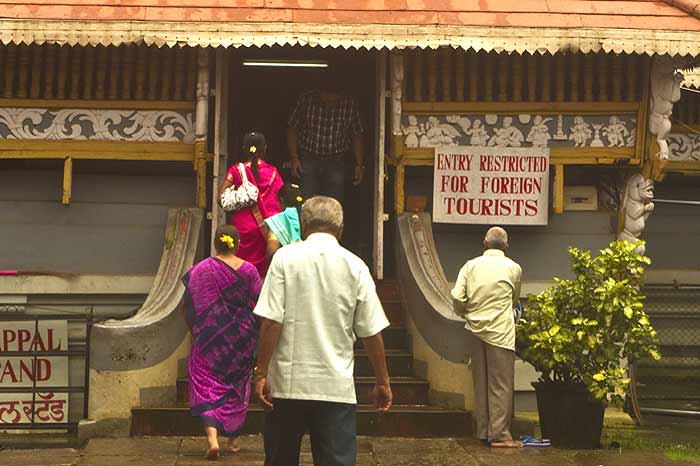 No entry The signboard at the 450-year-old Mahalasa Narayani temple at Mardol. (Photograph by Assavri Kulkarni)

Still, to put out a distinctly tourist-unfriendly notice at a 450-year-old temple (Narayani) seems a bit out of place in a state whose life-blood is tourism. The debate has raged for over 30 years now—is too much tourism wrecking Goa’s religious/heritage sites; are foreign tourists taking advantage of its liberal climate with a kind of behaviour that may be frowned upon even in their own countries? Says Agni, “We’ve become too liberated, this ‘chalta hai’ attitude has to stop.” Educationist Melsa Vas agrees, “Every individual’s rights must be respected. Everyone is free to live their own life. But if the socio-cultural context of a place is not conducive to a certain kind of behaviour, you’re intruding into someone else’s space.” Yet, a stable economic factor like tourism can’t be discounted, especially when you see foreign arrivals have taken a hit in other popular Indian destinations like Kerala. Goa has so far escaped, in fact the sector is seeing an upswing here. Tourism director Swapnil Naik says the last tourist season saw nearly 900 charters from foreign destinations bringing in over 1.71 lakh tourists. With the state getting over 26 lakh tourists, it means a 15 per cent increase over tourist arrivals from the previous year.

The 16th century Bom Jesus Basilica, for instance, where the relics of St Francis Xavier are kept, plays host to 10,000 visitors daily. This figure can go up to twice as much on weekends. The Basilica is a heritage monument, looked after by the Archaeological Survey of India for the last 45 years (they take care of the security and maintenance) but it is also a place of worship for the devout. “It’s a very special place for Goans,” says Father Barretto. The trouble is, in most packaged tours, especially the charter-loads from abroad, a trip to the beach is combined with a tour of monuments like the Basilica and the Mangueshi temple.

“We have become too liberated. This attitude of ‘chalta hai’ has to stop...but this is no right-wing conspiracy.”

For now, the church is not in a forgiving mood. Father Barretto, who came to the Basilica eight years ago, has been mulling about “bringing in decorum” but has been stymied by the ASI. There’s a history of conflict between the religious order and the mandarins at the ASI. “I wrote to the ASI saying we were planning some steps and they wrote back saying they had to get permission from Delhi,” says the frustrated priest. He now plans to put up notices about dressing decently when in the church. If that doesn’t work, they will keep robes at the entrance to cover up those who aren’t dressed appropriately. If nothing works, a dress code may come into effect, he says. Some others in the Basilica management committee favour quicker solutions. “You have been planning to renovate your house for many years but put it off for various reasons. It does not mean you cannot do it now,” says a committee member who didn’t want to be named.

The temples in Goa, many of whom are family-run and do not receive any state grant, are not so tied down. So the Narayani temple can stop foreigners at the gate and many others like Mangueshi and Shantadurga have made their stand on dressing clear. “The Mahajans own the temple and the 1,200 local families took the decision on the ban at a general body meeting. I am just implementing it. Nobody from the tourist department has raised objections,” says Vinod Kamat, temple committee head at the Narayani temple. (The Travel and Tourism Association of Goa, in fact, says their advisory asks that a sense of decency be maintained while visiting places of worship.)

But why has the temple taken such a drastic step of a complete ban on foreign tourists? Well, the Narayani temple is not exactly on the tourist map but the last 6-7 years have seen busloads of foreign tourists landing in its courtyard. “Many would make their kids sit on the palki and take pictures. Others would slip footwear into their bags rather than keep it at the place assigned for footwear and walk into the temple,” says a priest. Devotees also found the loud talk by the guides herding their flock a nuisance. Many were outraged that foreigners would buy the garlands sold outside temples, wear them and then slip them off and offer it to the deity. But is an outright ban the answer? “It’s only for foreign tourists,” says a priest. “Indians who are Christian or Muslim are welcome because they know and follow our culture.” Besides, even now foreign tourists are allowed into the yard but not in the temple where pujas are performed, they say.

The trend is catching on. Right now, the padres in Goa’s churches are debating whether or not to be as strict as the temples. They have to decide fast, for the post-monsoon season is upon them. The tourist wave will hit soon, rising up to a crescendo in the year-end revelries.

A Pail Of Piety Against An Augean Stable