The Horn Of Plenty

Rhinos have a space crunch, thanks to successful conservation 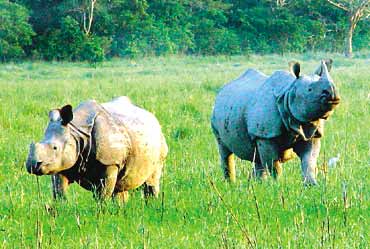 outlookindia.com
-0001-11-30T00:00:00+0553
It's a problem of one too many these days at Assam's famous Kaziranga National Park, home to the once-endangered one-horned rhinoceros. At the root of this is an extremely successful conservation project that saved the rhino from near-extinction. Although the number of rhinos has risen from 12 in 1905 to 1,552 today, the sanctuary area hasn't increased as rapidly, leaving the animals less space than they require. As Assam's minister of state for forests Pradyut Bordoloi admits: "The rhinos are overflowing in Kaziranga."

The situation is similar in Pabitora, a small sanctuary situated in the flood plains of Brahmaputra not very far from Guwahati. Here the concentration of rhinos is possibly the highest in the world with 76 horned animals jostling for space in about 16 sq km. Bordoloi is aware of the space crunch faced by the rhinos and other animals such as deer and wild buffaloes. Says he: "The original area of 430 sq km earmarked for Kaziranga is clearly not sufficient for the increased number of animals. So a decision was taken to add another 430 sq km to the park. Unfortunately, owing to several court cases, we have been able to gain control over just 280 sq km of additional area."

The forest department has, however, formed an alternative plan to battle the squeeze. "Right now, the best alternative is to translocate the rhinos to similar forest areas within Assam," Bordoloi told Outlook. The new areas where rhinos from both Kaziranga and Pabitora will be shifted are Lawkhowa and Burachapori as well as to another famous sanctuary—the Manas Tiger reserve bordering Bhutan. Although forest officials say the additional areas once under the control of the department will be sufficient to accommodate even 2,500 rhinos, conservationists point out that it is easier said than done.

For starters, settlers, many of whom are illegal Bangladeshi migrants with powerful political patrons, occupy many of the adjacent areas. Another problem that park officials face is the uneven distribution of rhinos. Park director N.K. Vasu says: "Although we've four ranges in the park, the rhinos are mainly concentrated in two ranges—Bagori and Kohora—whereas in the other two ranges, Agratoli and Burapahar, the number of rhinos is much less. For instance, in the first two ranges, up to 10 rhinos are found in every square kilometre, whereas ideally the number should not be more than three. We are now trying to correct the imbalance so that overcrowding is avoided." But the fact is rhinos prefer grassland habitat and the Agratoli and Burapahar ranges have less of them. They are also located close to the noisy Guwahati-Dibrugarh National Highway 37 that cuts through the sanctuary.

Space crunch apart, Kaziranga is facing other problems as well. Says a park official: "We're right now battling a poisonous weed called Mimosa that is threatening to overrun the park." Mimosa is a toxic weed that grows rapidly in the grasslands of Kaziranga. Says the forest minister: "Our staff is uprooting the weed and destroying it, but we have not been able to find a permanent solution to this problem." Officials also say the grasslands to woodlands ratio in Kaziranga is undergoing a change for the worse, making the survival of the rhino more difficult. As an official explains, "Rhinos thrive in grasslands full of water bodies. Traditionally, Kaziranga has had about 60 per cent grasslands with the remaining 40 per cent taken up by thickly wooded jungle full of tall trees. Of late, however, the ratio has reversed, further shrinking the area available to the rhinos." To add to the woes of the authorities, erosion by Brahmaputra and increasing siltation is reducing the water bodies in Kaziranga.

There is one silver lining, though. The rate of rhino-poaching has gone down substantially over the past three-four years. While the poachers killed nearly 300 rhinos in the decade between 1985 and 1995, in the past few years constant vigil and better resource management has curbed poaching. For instance, in 2002, poachers could kill only three rhinos, a steep fall from 1992 figure of 49 rhinos falling prey to the poachers. As Bordoloi says, "The fall in poaching incidents is something that all of us can be proud of." Ironically, this formidable feat has, in part, contributed to the problem of plenty in the one-horned rhino's crowded home.