The Hook Of Revelations

Cronje knew more than he revealed. Did his death have anything to do with that? 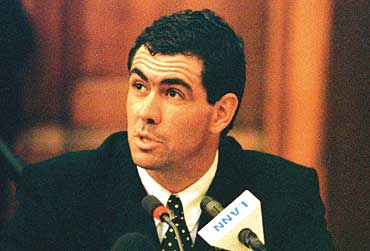 outlookindia.com
-0001-11-30T00:00:00+0553
Was Hansie Cronje's death in an air crash an accident? Or was he murdered by a betting cartel? A recent report in the British newspaper, The Observer, seems to suggest the latter. The former South African captain was apparently bumped off for "fear of the real truth about Cronje ever emerging". From all accounts—including Outlook's independent inquiries with investigators who exposed Hansiegate and those close to the disgraced cricketer—Cronje knew too much. And was therefore vulnerable.

"There are just too many loose ends in the case. As far as we are concerned, the investigation is incomplete and much more would have surfaced on the organised bribery and corruption that was taking place on an international scale," says Delhi Police special commissioner K.K. Paul. In April 2000, it was Paul's crack team that trapped Cronje and London-based bookie Sanjeev Chawla through telephone taps, when the South African team was on a tour in India. It was this investigation which caused a sensation and prised open the murky underbelly of international cricket.

The Delhi Police believes that had the South African authorities replied to its exhaustive questionnaire, much more would have come out. For starters, had the telephone calls and transcripts of 1999-2000 relating to Hamid Cassim Banjo—the restaurateur known to most South African and Indian cricketers—been thoroughly analysed, "more muck" would have surfaced. "Banjo and some key punters are a crucial link," says a police official. The King's Commission, appointed by the South African cricket board to inquire into the betting scandal, had details of the calls made by Banjo to some other South African cricketers, including Shaun Pollock.

But crucially, two letters rogatory (LRs) sent by metropolitan magistrate M.C. Gupta on August 31, 2000, and accessed by Outlook, are revealing. Here are seven of the 18 pertinent inquiries about Hansiegate raised in the first LR sent to the director, councillor and agency services, department of foreign affairs, Pretoria:


Another LR was sent to the judicial cooperation unit of Scotland Yard, asking for specific details of Cronje's accounts in NatWest Bank in Leicester and Merill Lynch in London. Information was also sought on:


The response to both these LRs was not satisfactory. "We got some information from London but there has been nothing from South Africa all these years. If we had got replies, we could have analysed the evidence and proceeded further," says Paul. On this issue, Shamila Batohi, the King Commission's chief prosecutor, told Outlook that she was unable to explain why South African authorities had failed to respond to the Indian request. "I do not think this (Cronje's account details) should have posed any serious problem, especially since we are committed to cooperating internationally. By the same token, though, I could respond by asking why the Indian police have not acceded to our request for the Cronje tapes," says Batohi. To this, Paul counters: "We gave them the transcripts. The tapes are in the possession of the designated court."

According to Indian investigators, the facts that surfaced before the King's Commission, set up by the South African authorities to look into the match-fixing allegations, were sketchy and inconclusive at best. Just as the commission was getting closer to the "bigger picture", it was hurriedly wound up. At the end of the four-month sitting, it slapped a life ban on Cronje and a six-month ban on cricketers Herschelle Gibbs and Henry Williams. Both conspired with Cronje to underperform in a one-day international in India in March 2000.

However, Batohi disagrees that the commission was prematurely wound up. "The question arose as to whether the financial and other resources that would have been needed to determine this (total amount involved in match-fixing) was actually worth it." But those in the know point out that the South African board was worried that many other players would be tarnished and the game itself would suffer.

A close associate of Cronje in Cape Town told Outlook: "He was gaining public acceptance and putting his life back on track. His testimony before the commission was untruthful and I know he was protecting others." A friend of the former South African captain in Johannesburg too echoes the sentiments. "Ever since his death and long before the media allegations, I was convinced that his death was no accident. Cronje had openly stated that he would not have fingered Gibbs and Williams had they not come forward themselves. How much more did he withhold from the commission? By the look of things, once Cronje started a new life after cricket, many did not trust the fallen icon to keep his silence."

Meanwhile, South Africa's Civil Aviation Authority (CAA) has distanced itself from the allegations of an unnamed investigator in the case quoted by The Observer. The paper quotes him as saying: "A lot of people wanted Cronje dead. They feared that he would one day tell the full truth and then many more would be implicated. I understand that the police have found evidence of sabotage but they are reluctant to go public on this." However, CAA's chief executive Seboseso Macobane told Outlook: "It was professionally reckless for any individual to pronounce on any aspect of the investigation until the official report had been released."

Whether the complete truth about the match-fixing scandal, which came close to destroying world cricket, will ever be revealed is anybody's guess. Batohi appeals for closing the issue rather than raking it up. "Cronje's death marked a sad, tragic ending. But it is all over now. There's no need for any kind of speculation." Indeed, many who dealt with Cronje during his playing days would be keen to see that the case is closed. In fact, forgotten.