They’re joined at the hip: the superficial modernity of Digital India and a deep, unspoken ‘Hindutva’ 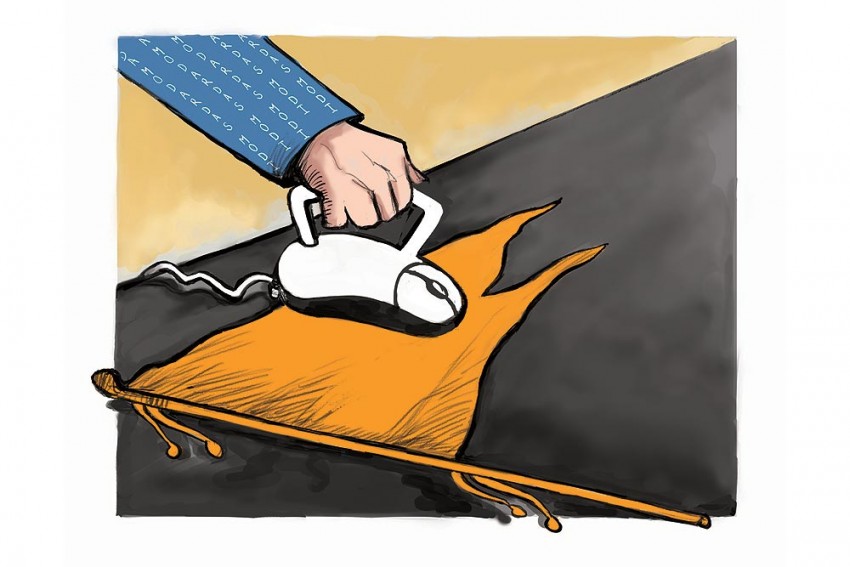 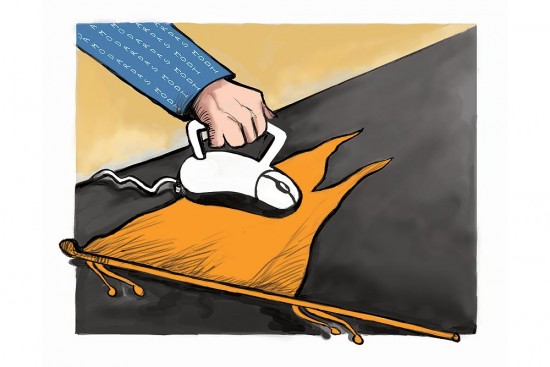 “I know, to achieve the vision of Digital India, the government must also start thinking a bit like you (Silicon Valley).”

“We will cleanse every area of public discourse that has been westernised and where Indian culture and civilisation need to be restored—be it the history we read, our cultural heritage or our institutes that have been polluted over years.”

If there is one characteristic that can define India since 1991, it is the fundamental disjunction between the scientific-technical and the economic on the one side, and the ethical/moral and the social/public good on the other. The latter are sacrificial lambs at the altar of a neo-liberal, market-led model of development that can be essentially termed as technicism. In this conception, development is merely reduced to economic growth and progress in science and technology rather than a broader understanding of human or planetary well-being. Of course, science itself is not pursued for its revolutionary implications, while technology is merely a panacea for practical needs. Both are seen in a vacuum, quarantined from social contexts.

While this tendency is not unique to India, under the present Narendra Modi-led regime, it acquires a radically new feature. Technicism is married to a virulent and agg­ressive cultural agenda. A Digital India is sought to be ushered in, but premised on the revival of the great Hindu civilisation. The attempt to reach the pinnacle of economic and scientific development is accompanied by the project of cultural “cleansing”. But development and culture mirror each other—in yoking culture to technicism, culture itself becomes mechanical, losing its vitality.

Recently, the Financial Times, London, argued that Narendra Modi “embraces modernity...just not at home”. It sees a dichotomy between “India’s first tech-savvy, social media-enabled prime minister” and his party’s own culturally regressive agenda at home. On the one hand, there is the globe-trotting and internationalist PM, courting world leaders and business heads to “Make in India” and visiting the Silicon Valley to “Start-Up India”, and on the other, there is his party and fundamentalist supporters who seek to enforce an unmodern code when it comes to meat-eating, romantic relationships, school pedagogy, critical thinking, foreign culture, the religious “other” and so on. But this dichotomy between development and Hindutva, widely shared by even critical commentators, is a false one.

Even during the elections last year, this narrative was dominant that the majority of the people who voted for Modi wanted development and not Hindutva and that the BJP was following the cue. This misunderstands the nature of the BJP and its relationship with the RSS and the Sangh parivar, and underestimates the large numbers who might not be explicit supporters of Hindutva, but give silent assent to a majoritarian Hindu national identity by not actively rejecting or resisting Hindutva. Unlike common wisdom, the latter is more dangerous than the former.

More importantly, it misunderstands the unifying logic of both neo-liberal capitalist development and Hindutva (which is technicism). Both have an instrumental attitude, the former towards economic growth and science and technology, and the latter towards culture. Both thus miss the fundamental purposes of economic growth/science and technology and culture, and their vital progressive and critical aspects.

Thus seeing Modi’s seeking of economic and technological progress for India as “embracing modernity” is fundamenta­lly a mistake. For modernity is not technicism or the expansion of the market, it is a larger project in which technological and economic betterment is only one aspect. More significant is the liberation of the human mind from the shackles of unreason (in which science is a mere aid), the seeking of the end of all oppressions, satiating the craving for liberty, equality and fraternity. Without this, there is no modernity.

It is wrongly thought that technicist development is somehow above culture; that it merely seeks to bring about economic progress and science and technology without any cultural accoutrements. That is why seeking from the BJP-led government just development and not Hindutva is seeking an Eden that does not exist. It is ironic to see commentators who had argued circa 2014 that Indian democracy and its institutions are strong enough to resist right-wing majoritarianism now lamenting the “closing of the Indian mind”.

Even the most modern of nation-building projects rely on myths of all kinds. What more cogent example of this than Nazi Germany, which used the most advanced forms of science and technology in the service of the most horrifying cultural agenda built on its own interpretation of Teutonic mythologies? Thus when the culture minister of India, who interestingly is a physician by profession, exhorts us to join the project of cultural cleansing and states that “I respect the Bible and Quran but they are not central to the soul of India in the same way as Gita and Ramayana are”, we are on familiar territory of myth-making by modernising nations.

The attempt to reclaim the glorious cultural essence and the nation’s own myths and “superstitions” is thus only seemingly opposed to (an instrumental) science and capitalism, but is almost completely in sync with them, and the technicist notion of development. That is why there is the great urge to assert that plastic surgery, genetic science and nuclear testing already happened in Vedic times; yogic farming is the best solution to India’s devastating agrarian distress; and that yoga has been adopted by the most developed of countries.

When the prime minister visits the Google headquarters and asks that Khagaul, Bihar, be pinpointed on Google Earth (Khagaul is where the ancient astronomer Arya­bh­atta was believed to have had an observatory), a Hindu India is claiming itself as the original repository of scientific and technical knowledge. Ganesha’s transplanted elephant head and Karna’s out-of-womb birth are not magical legends contradictory to a Digital India, but one in the long lineage of scientific achievements. 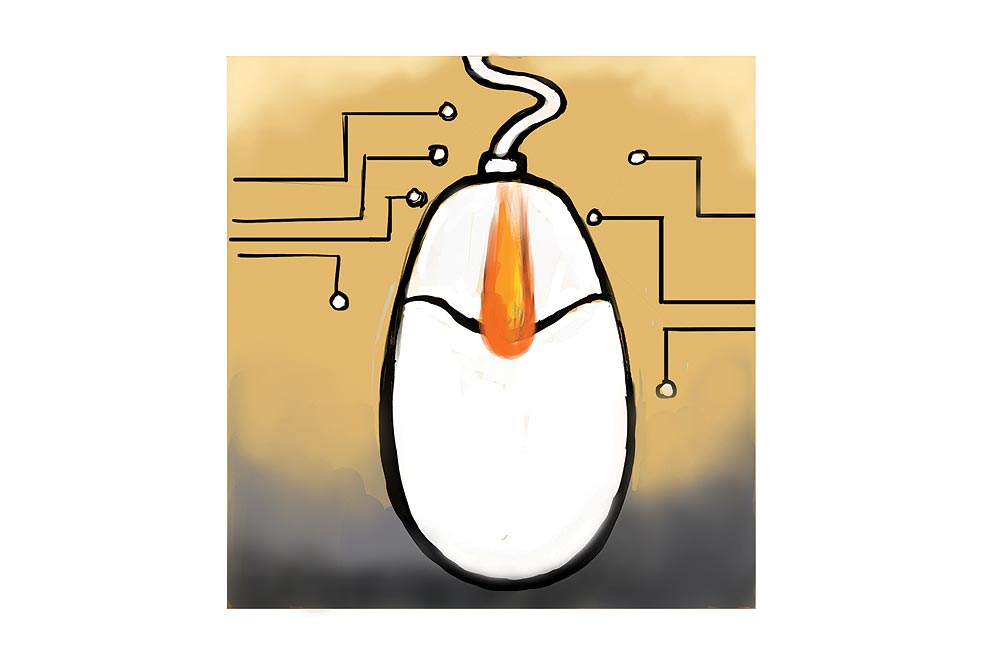 In drawing a tight line between Hindutva and development, we risk missing its linkages and affinities. As the scholar Thomas Blom Hansen presciently argues, Hindu nationalism is attractive for it fulfils the “desire for recognition” in a globalised world marked by complex cultural and financial flows and consumerist desires. More importantly, according to Hansen, it provides an anchor and order in a fractured social formation threatened by the political assertion of ‘lower castes’, and the fear of the Muslim.

In seeing Hindutva as a fringe element of the Yogi Adityanaths, Giriraj Singhs and Sakshi Maharajs, we miss the insidious and subtle growth of a Hindu national identity (which for all purposes is inflected by Brahminical and ‘upper-caste’ values) among the ‘modern’ sections of India, including its tech-savvy youth. That is why the hip NRI crowds of Modi cheer his eulogies to Sanskrit, Bhagavad Gita and yoga and his relentless mocking of secularism, a concept which is still enshrined in the Indian constitution.

A Hindu India, barring some minor contradictions, is at home with the superficial modernity of a Digital India.

Even if explicit Hindutva is not embraced, India is mainly conceived through a Hindu lens. India wants to become modern but not as deracinated India—faceless among the millions of moderns elsewhere, especially in the West. It wants to assert its place as a modern Hindu India. A digital and Hindu India converge when thousands of people change their Facebook profile pictures to one with tricolour hues in support of Narendra Modi’s Digital India initiative, and when the overwhelmingly Indian audience at the Facebook headquarters welcomes the PM with chants of “Modi, Modi” and the song Chak de India playing in the background. Many of these are not Hindutva supporters, but nationalists, who, keeping in line with the technicist compartmentalisation of ethics, close their eyes to depredations wrought by the idea of a Hindu India.

Thus the exhortation by the Financial Times to choose one among the two options (“Mr Modi may have to decide whether he wants to be leader of an ancient Hindu civilisation too proud to think it needs help from the outside world, or of a modern, outward-looking nation of young people even more tech-savvy than he is”) is unable to make sense of the kinships between a Hindu India and a globalised world.

As the technicist notion of development goes hand in hand with Hindutva’s instrumental notion of culture, the arts and social sciences are worthless except for some purposes of political propaganda. This is not a feature of a right-wing Hindutva regime alone, but the incendiary nature of its cultural project takes instrumentality to a new low. Thus the government wants to convert the Nehru Memorial Museum and Library (NMML) into one which showcases ‘governance’, the pillars of which would, of course, be ‘smart cities’ and ISRO’s unmanned flight to Mars, the crowning glory of our scientific advancement.

What is more significant than the brazen bureaucracy at work in the government’s treatment of FTII (and other institutions like the NMML and ICHR) is the lack of resistance from the public and the value accorded to cinema and history in our society. While nations like Iran and China, despite their authoritarian regimes, have produced films which have touched the pinnacle of world cinema, our new economic and technical cinematic prowess, supposedly capable of taking on Hollywood, produces puerile films which earn Rs 700 crore at the box office.

Thus a development sphere gripped by technicism is the breeding ground for instrumental and mechanical understandings of culture, both feeding off each other. The apathetic responses to periodic health crises and farmer suicides, the scotching of critical thought by killing non-conformist thinkers, the continuous abrid­gement of cultural freedoms are parts of the same technicist puzzle.

India of the present, despite its abysmal levels of human development, has global power aspirations. These aspirations demand not only an unshakable faith in the power of science and technology but also in the dog-eat-dog world of capitalism. And now we are asked to embrace the cultural project of Hindu India along with it. Here culture becomes a mere appendage. As philosopher Theodor Adorno said, “Technology is making gestures precise and brutal, and with them men.” This spread of a superficial modernity—of capitalism and instrumental science—should not be confused with modernity. A Hindu India, barring some minor contradictions, is perfectly at home with the superficial modernity of a Digital India.

The seeds of a critique can emerge only in a counterculture of incessant questioning which is the fundamental basis of modernity as well as scientific enquiry. When Narendra Modi says his government wants to think like the Silicon Valley, this incessant questioning is not what he has in mind (nor is it in the minds of the digital corporations of Silicon Valley). For that, just literacy, digital or otherwise, is not enough; but critical forms of pedagogy which challenge dominant forms of thought which legitimise all forms of exploitation are an absolute necessity. This is impossible without abandoning an instrumental notion of culture. India’s future does not lie in a Hindu India, however digitised.

The author is with Dalhousie University, Canada.

This Man Is Neutral