The Hick, Finally At Home

Those ‘backward’ days are over. The emancipation of the Indian emigrant is complete. For New India is now a Big Deal. 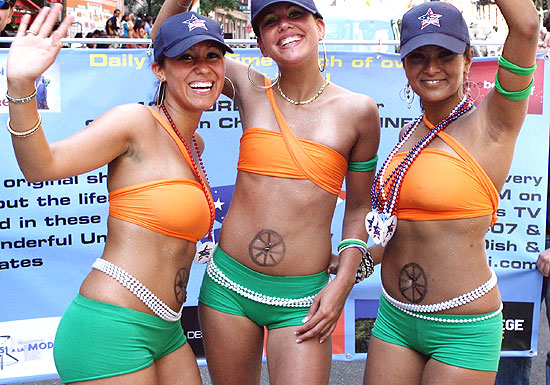 A curious thing has happened to expatriate Indians in the last decade, and particularly in the last five years: they have become emancipated, unshackled from the India of old, which had been the source of so much angst for them in the lands of their adoption.

India was a benighted place, impoverished, quasi-socialist, corrupt and sanctimonious, the sort of place where the pursuit of happiness—to use a quaint American phrase—was manifestly impossible. These were precisely the qualities that had caused Indians to leave India in droves, and, in many cases, Indians abroad came to have a vested interest in this narrative of desi decrepitude: after all, India’s seemingly incorrigible state allowed the emigrant to live abroad with a clearer, lighter conscience. You tell me, what could I do for India, in India? It was more rational, surely, to bugger off, better oneself abroad, and do what little one could for the folks left behind. V.S. Naipaul wrote in the 1990s of a new India of “a million mutinies”; but it was the Indian emigrants who were mutinous, the original mutineers—and there have been millions of them.

And now Islamic terrorists hate us as much as they do the US. What better proof of Big League status do we need?

India, however, had a perverse way of clinging to its sons and daughters like acrid smoke from a choolha. While the immigrants found ways to retain an Indian identity—through food and films, music, the support of Indian cricket teams (alas, hockey has let us down)—they frequently found their country of origin to be a source, also, of awkwardness. I recall a desi dinner party in New York, about 10 years ago, where the guests were united in their outrage over a story in the New York Times about a murderous feud in a small village near Mathura—which had ensued after a man from one caste had eloped with a woman from another. The correspondent, Celia Dugger, had put in an impressive amount of work, and had done her best to explain to American readers why some castes will go to war with others over the boy-girl stuff. It was eye-opening reportage from India’s ugly backwaters, yet the New York Indians could only say of the NYT, “There they go again, portraying us as backward people who don’t even live in the 20th century.” It was a heavy burden they bore, those immigrants, upholding the honour of Mother India. They were the frontline in India’s response to a critical, sneering world. Their amour-propre was, as they saw it, bound up with India’s own. 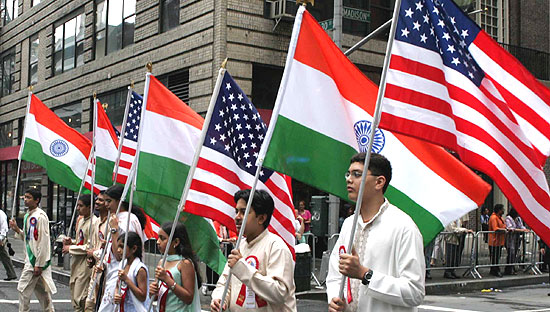 Independence Day: NRIs swishing Indian and US flags at an Aug 15 rally in New York

No more, however. The emancipation of which I spoke above has put an end to this. With economic growth (about bloody time!) has come an India which is on the front page of the New York Times for reasons not to do with the meting out of crude rural punishments on errant lovers. Chronically under-confident India is now a Big Deal. Its environment minister can scold Hillary Clinton on climate change and trade sanctions, and even be cited approvingly for doing so in an editorial in The Wall Street Journal. And Islamist terrorists hate us as much as they hate the Americans. What better proof of Big League status does one require? What’s more, Barack Obama makes incendiary remarks about wanting to save jobs in Buffalo, not Bangalore: Isn’t that, in some way, a compliment? After all, it is only about non-serious countries that mealy-mouthed niceties are uttered. We’re now big enough to be bashed (even as we complain about the same Obama’s reluctance to visit India, and pay us court).

India’s economy has emancipated the Indian abroad in other, smaller ways, too. Who has not travelled back to India recently—from New York, London, Vancouver or Dubai—and scratched his head over the question of what to take back to relatives in Delhi, or Chandigarh, or Thiruvananthapuram, or Nagpur. Once upon a time—and I speak from personal experience—one needed to do no more than go to the nearest supermarket and fill up a shopping cart with chocolate, cheese, ham and biscuits, all bought in bulk packs, to be lugged back home to people starved of exotic foreign food. The same was true of jeans and T-shirts, bras and sweaters. Not anymore. The clothes are now all made in India (or Mauritius, or Sri Lanka or Bangladesh—imagine taking home to your brother a shirt made in Bangladesh!). The foods are all available too—at a price, but available. No longer exotic, they’ve ceased to be gifts that enhance the status of the NRI giver.

In these ways—micro and macro—the Indian immigrant abroad no longer feels protective of, or patronising towards, the Hick at Home. This liberation has had intriguing consequences: it has allowed the unburdened immigrant to integrate himself more fully into the political life of his adoptive country (something Indian immigrants have been notoriously poor at doing). And in doing so, they have become—paradoxically—more effective in the service of their country of origin. Witness the role played by Indian-Americans in the lobbying for the recent US nuclear deal with India. American lawmakers (and an American president) paid them careful heed not because they were Indian, but because they were Americans who were pulling for India because the deal was good for America.

And it was the new India, in effect, that allowed them to be American—not mimic men, nor people in limbo, nor members merely of a “diaspora”. That is independence, truly defined, for the Indian immigrant abroad.

(The author, executive editor for opinions at Forbes, is a professor at NYU’s Stern Business School.)