Anna is all-permeating. Bollywood isn’t immune. But they’re okay with that. 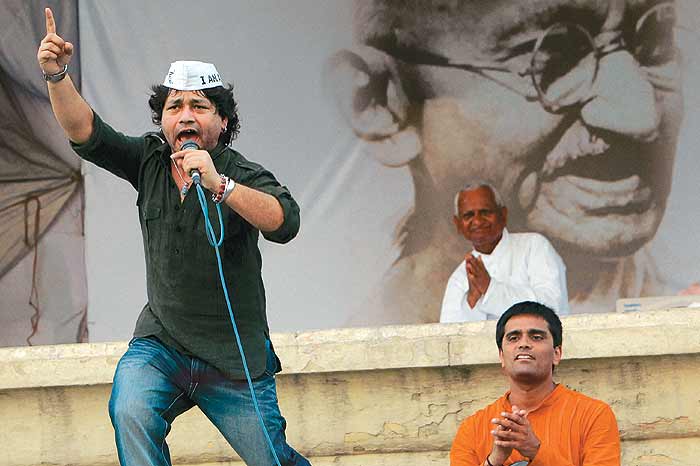 The Anna Hazare story—about the small man taking on the establishment—has been Bollywood’s go-to script for ages now. Anna, for Om Puri, brings back memories of the iconic Anant Velankar, his cop turn in Govind Nihalani’s influential 1983 film Ardh Satya. Puri’s policeman was perennially trapped in a cesspool of corruption, mafia and politics. “However, corruption is not a half- , but the absolute, truth in our lives now. People are fed up. That’s why there has been such spontaneous support for a simple, honest and blameless man. Anna is the Gandhi, Mandela, Martin Luther King of our times,” says Puri.

His story is the stuff of the average film script, but Anna is turning up backers and detractors in fickle tinsel town.

For veteran actor Anupam Kher, Hazare is reminiscent of his grandfather, a civil engineer in Shimla who quit his job when he was offered a bribe. Anna is also a throwback to Kher’s first role—the principled, unbending headmaster B.V. Pradhan in Saaransh (1984). He terms Anna’s movement the most significant event in independent India’s history. “It is a rare moment when India has come together as a nation. Otherwise, we feel patriotic only in a war against Pakistan or when we are playing a cricket final. It’s a moment of self-pride, self-respect and self-discovery,” he says. His wife, actor Kiron Kher, concurs. She thinks the frail old man forced Indians to wake up. “It’s a peaceful movement that has seen participation from such a large cross-section of people,” she says. 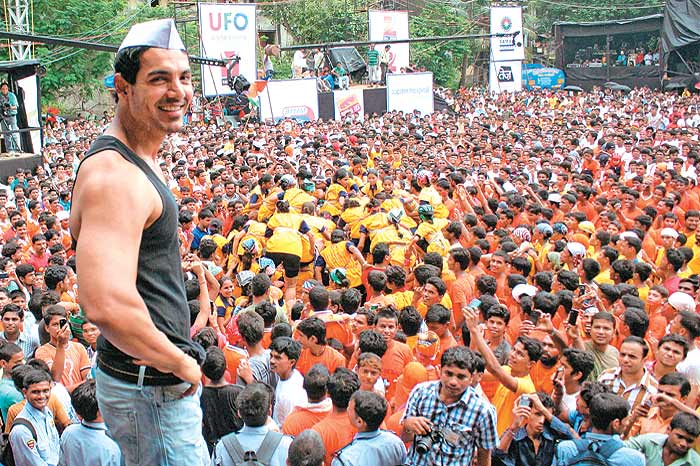 John Abraham in an Anna topi

Diametrically opposed to Anupam Kher is Mahesh Bhatt, his mentor and the creator of B.V. Pradhan. Bhatt thinks Team Anna is an autocracy posing in the garb of a democracy. “The world needs to be saved from these self-proclaimed saviours and peddlers of hope. They are like the hakeem (quack) round the corner offering instant cure against the deep-rooted cancer of corruption,” he says. He contends that a handful of people have fashioned a fascist document in the form of the Jan Lokpal bill. “Democracy is about bestowing power to the people, but this creates a superstructure that has absolute power,” he articulates.

“The movement is that rare instance where we come together as a nation. A moment of self-pride and self-discovery.”
Anupam Kher, Actor

Such a clash of opinions between friends Bhatt and Kher might seem straight out of a Bollywood film but is also reflective of the conflicting views playing out on the streets. “I don’t love Anupam less, will not impose my views on him, nor embrace his,” says Bhatt. “We have agreed to disagree,” adds Kher. Like them, there are other Bollywood personalities separated on either side of the ideological divide. For every Rajnikanth who issues a statement or Shekhar Kapoor who tweets in support of Hazare, there are the openly sceptical voices of Shabana Azmi and Javed Akhtar who want the sidelined alternates—Aruna Roy, Nikhil Dey et al—to also be heard.

It may be trivialising reality to interpret it through the viewing glass of cinema but the participation of stars does appear to have lent a larger-than-life aura, drama and showmanship to the movement. Be it Ram Gopal Varma feigning ignorance about Anna or Vidya Balan sporting the Anna topi; John Abraham breaking the dahi-handi of corruption or Vishal Dadlani boasting of his participation in the Mumbai march; hasty visits to Ground Zero by Kabir and Pooja Bedi, a forgotten actor, Raja Bundela, trying to reclaim his place under the sun or Shreyas Talpade wanting a piece of the Anna pie to give a leg-up to his round-the-corner film, Hum Tum Aur Shabana, Bollywood has revealed itself in myriad shades under the Anna umbrella. “Film people are largely apolitical but they like crowds—to sell their wares,” brushes aside a cynical Bhatt. What better place to find a ready audience in India now? On the other hand, Puri is appalled by the lack of participation from the top stars. “They are the heroes of the people. Why can’t they say a few words, join in support?”

“It has a fairytale narrative. It offers instant euphoria and gratification. Serious discourse has been reduced to burlesque.”
Mahesh Bhatt, Filmmaker

Bhatt thinks the movement itself is employing the rhetoric of Bollywood. He says Indian viewers prefer films that promise happiness rather than the ones that make them confront the truth. “This movement has a simple, fairytale narrative. It markets a dream, offers euphoria and instant gratification. A serious discourse has been reduced to burlesque,” he says. Kiron Kher disagrees. She finds the moves of the intelligentsia and government as “predictable as the screenplay of a bad film”. “We have appreciated the movements in Egypt and Libya. Why run them down in our own country?”

There are still others in Bollywood who do not like the industry being dismissed summarily as being without a head, heart or soul. Corruption, dishonest politicians, red-tapism affects them as much as anybody else. “I am not an activist. But we have all been reading about and seen the state of the nation. Politicians and bureaucrats need some serious soul-searching,” says actor Ranvir Shorey. For him, the movement is important because it has made an impact where others have failed. “It has brought things to a boil, it has shown that though Parliament is supreme in letter, it’s the people of the country who are supreme in spirit,” he says. “I have lived life at the grassroots, experienced corruption in day-to-day life,” claims singer Kailash Kher. Which is what made him compose lyrics like Behoshi ki aadat ke, jhooth ki ibadat ke, aankhon se hatao jaale—he flew up from Mumbai at his own cost to sing them from Anna’s stage at Ramlila Maidan. And when the crowd started singing along with him, it was a new high—one that no TV show or gala night can recreate. For many in Bollywood, Anna’s campaign has given them a timely brush with ground reality.