The Heist Is On...And Off

Kaante rocks, but it may not be enough to stun a fickle-minded box office 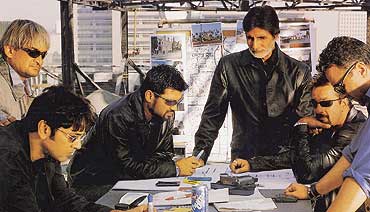 outlookindia.com
-0001-11-30T00:00:00+0553
If your name is Sanjay Gupta and you don't have oodles of talent and still desperately want to make a film that people might want to remember, and possibly become a moderate hit, you go to the neighbourhood movie rental store and buy a CD of Reservoir Dogs , Quentin Tarantino's 1992 debut edge-of-the-seat Los Angeles-based thriller about a jewellery store robbery by a gang of eight gone awry.

Watch Tarantino's gut-wrenching film carefully and replace its four killers with six. Change Reservoir Dogs ' shoutout: 'Four Perfect Killers, One Perfect Crime' to 'Six Honest Intentions, One Perfect Betrayal'. And sign on Amitabh Bachchan to play a "Major" whose wife is dying with a sad face. Make Sanjay Dutt look so droopy and menacing that Bal Thackeray will never recognise the boy who begged him for mercy just a few years ago. Ask Sunil Shetty to match his acting skills with Malaika Arora, who, in a long slit dress, must be the most overdressed bar girl in Los Angeles. Goad Lucky Ali to act because now we know he can't sing and make a living. Cleverly cast Mahesh Manjrekar to rock the theatre. And reintroduce a wan Kumar Gaurav to cinema, so that the number of heroes is even. Give them six honourable reasons to rob a bank, one of them being that some LA cops deposit their salaries there. Then make them all walk in slow motion towards the camera, as though they are a boyband strutting through a music video. Take Satya's patois to Los Angeles after adding innumerable expletives, including the very English "big boobs" and "Arsehole" which the censors pardoned because the kind of people who have to be protected against bad influence in India do not understand English.

In the end of it all, Kaante turns out to be a highly stylish heist drama that has been shot by an all-American crew, which, if it's self-respecting enough, may not want to see what Gupta did to some of the sequences in the editing room. After expensive post-production work in the US that delayed the release of the film for months, it's a risky first-of-its-kind in Bollywood.

Kaante is also a very clever film. It warns the audience right in the beginning that its heroes are going to die. Don't be upset. Except for Sunil Shetty, who looks dead when he is supposed to tell his woman that he loves her very much, and blinks for a fleeting moment when he is supposed to be dead; and Lucky Ali who rightly wonders in some parts as to what exactly he is doing there, the other four impress. To be fair, Shetty too has given his best, but there is only so much Tarzan can do out of the jungle. The film struggles throughout to make each man look important. Many times Bachchan looks like an expensive Mercedes in a cross-country rally. A lesser man would have done what he did in the film. Dutt exhibits once again what he learnt so well from his bad company. He is yet again the impulsive rogue with a crude turn of phrase, and the same Vaastav character hurtling towards self-destruction. Kumar Gaurav shows, perhaps contributing a lump in the throat of those who remember him fondly in Love Story, that he was a mysterious talent that everyone forgot for no fault of his.

But the film belongs to Mahesh Manjrekar. With his crooked face that is thankfully not beautiful, atrocious mop of hair, contrived stammer and a stupid brain "that doesn't know the difference between software and underwear", there is not a single scene involving him that doesn't make the mind wander. "As a director I am intolerant to any actor's suggestions when I am shooting. So, as an actor, I understood the importance of behaving myself when someone else was directing. I just did what I was told to do," says Manjrekar.

Kaante doesn't pretend it needs a woman's love. As a truly male point of view that somebody like Karan Johar may not understand, the film only needs a woman's body to contribute relief in the middle of such serious work like planning to rob a bank.The 'item' songs, for some reason, have generous swaying of netted bottoms, perhaps exposing Gupta's personal inclinations.

There are many unkind things that can be said about this film, but one has to be a serious bore or a theoretical feminist, which is the same thing, to deny that Kaante is quite an entertainer.

It was essentially a script that the film's presenter Pritish Nandy says "everybody pissed on". After financier Bharat Shah ended where most of the characters in the film emerge from, many thought Kaante will not be made. But Nandy took it up, "because nobody wanted to touch it". Gupta froths in his mouth when he thinks about the days when he approached at least eight moneybags to help him make the film. "It was not the script they didn't want to touch actually. It was me they didn't want to touch." His imaginary and real foes in the industry "first thought Kaante will never be announced, then they thought it will never be made, then they thought it will not be released at all." He accuses "some industry people" with a "a crab mentality" of triggering a chain sms that revealed the film's closely-guarded suspense. "But all their attempts failed," he says. The Rs 30-35 crore film, according to Nandy, was sold at Rs 3 crore per Indian territory and at Rs 13 crore in the overseas market. The hysterical pre-release hype sent black ticket rates soaring to over Rs 500 for the first day shows last weekend.

Interestingly, in all the promotional festivities, there was one man who didn't seem to want any part of it. "Lucky Ali was the most miserable man on the sets," says a crew member. "Dutt, Shetty and Manjrekar ganged up against him for fun. But then it slowly turned serious. Dutt would occasionally go up to Lucky and ask him about his sex life. Lucky also kept asking for his payment which he was promised will be cleared in instalments." It was not just Lucky who had such troubles. The American crew stopped shooting for a day when their dues were not cleared. In the end, Gupta, at a late-night Mumbai preview last week, looked like a man who believed all the pain he went through had paid off.

He has left out nothing in the film. Stars, dirty talk, white, black and Indian lasses, and even patriotism. In these times of contrived nationalism, the film doesn't forget to ram in a little bit of don't-mess-with-we-Indians component. When the bank robbers go to a seedy man to buy guns, the arms dealer makes the mistake of stating proudly that he supplies weapons to those fellows who bomb India. Shetty looks dangerously at him and says that there are two things Indians don't like: "Cricket mein haar aur Hindustan pe waar." Then the arms-dealer is thrown off the skyscraper. And all the six men laugh proudly. Note: Sanjay Dutt laughs too.

While there are scenes that are clearly meant for what are often called "masses", Kaante is a very interesting pointer to the way Hindi films are evolving. They don't make films for Gandhi's real Indian anymore. Kaante has the story-line reference scrawls in English.There are portions in the film that are in English. On the whole, despite its language, it is western. More than the faux Kuch Kuch Hota Hai's college students who greet others with "yo". Clearly, with the release of Kaante, it's wrong to use expressions like 'front-bencher' to mean ardent moviegoers. Without impressing the kind of man who will go to vote everytime he is asked to, such 'modern' films have worked. But, at the risk of generalising, Kaante is a film that women will be indifferent to. No Hindi film that women have rejected has ever been a huge hit. Ram Gopal Verma learnt it in an unpleasant manner through his gangland flick Company. Like Kaante, it was stylish, it was about men who use expletives and guns.It was even made by a man who is not called Sanjay Gupta. But there is one thing Company didn't have. Mahesh Manjrekar. Especially the way he tells the cops that he was only "with a girl with big boobs on the 12th floor" and not at the scene of a crime.

Kaante rocks, but not enough to stun India's fickle box office and bring out Bollywood from its deep funk.

The Zodiac In Your DNA