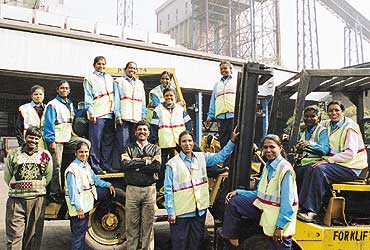 outlookindia.com
-0001-11-30T00:00:00+0553
Our cities are already blessed with them. Humankind’s sweeter halves don’t think twice now before getting behind the wheels and zipping past irritable and often jealous male drivers. But this sense of freewheeling bliss hasn’t still penetrated the thick skin of industrial thought process. Till now, that is. A team of 13 women has breached a male bastion at Tisco, Jamshedpur, driving and operating such heavy vehicles as power trucks, dumpers, shovels, fork-lifts, caterpillars and what have you. One even drives a locomotive. Another an ambulance.

Till recently, these jobs were out of bounds for women in all steel plants. It was felt only men could be trusted to operate the powerful and costly equipment. So what occasioned the melting of mindset? Around 500 women workers had been hired on humanitarian grounds, some were widows of ex-employees, others daughters of retired workers. They were employed mostly as tea-girls and sweepers. It was around this time that the company had a brainwave.

"We decided to train and employ the women more productively under the banner of Tejaswini," says Niroop Mahanty, V-P, human resources. Tejaswini was launched in September last year and 13 women employees were selected to join it. The onus of overseeing their training was given to Urmilla Ekka, HR manager. The company assigned two of its best drivers, Sushil Kumar and R.B. Singh, to coach the girls. There were some unusual hiccups. Says Ekka: "They were initially resistant to the idea of discarding sarees and salwar-kameez for their working uniform of shirts and trousers. But we insisted it was the practical dress for the job. And after friends and neighbours began appreciating their smart attire, their inhibitions disappeared."

But disappearing inhibitions aren’t a guarantee for overnight appearance of complex skills. To transform a group of comely women who hadn’t even ridden a scooter in their lives into ruddy drivers in three months was some task. But the resolve didn’t flag, and some women’s lib capsules along the way helped too. "We drilled it into their minds that they’d be doing the same work as men. They wouldn’t be pampered just because they were women but be treated as equals," says Ekka.

In January this year, the women were inducted into the workforce and placed in various departments as equipment drivers. Initially some snooty male drivers, bewildered by the gender-bending goings-on, looked down upon the recruits. More materialistic ones saw the induction as a clear threat to their own precious jobs.

Trainer Sushil Kumar recalls the rather encouraging taunts of some of the male drivers, "Hijra ban jaoge. (you will become a eunuch)" being one of the real gems, among others. Nothing happened, of course. The women held their ground and proved the quality of both their courage and nerves. Lakshmi had to climb six feet to reach the driver’s seat of the payloader while Gyanashree drove her ambulance carrying a worker with severed legs. By and by, like passengers with reserved berths making peace with uninvited guests in a train passing through Bihar, the steely men accepted the new-age iron girls.

The metamorphosis hasn’t just given a substantial boost to the women’s earnings and prospects but has also instilled confidence in them. Gyanashree—the most vocal member of the team—sums it up nicely: "From mere errand girls, we have now become a part of the process of steel-making. Initially, my mother objected to my job and dress but now she and other family members respect me as a professional. In the past we were somebody’s wife, mother or daughter, but now we have a distinct identity as a licensed heavy-vehicle driver. We speak a different lingo, of productivity and meeting targets. And when my neighbours address me not as chaiwali but as ‘driver sahiba’, my heart fills with joy."