The Heady Scent Of Royal Appeal 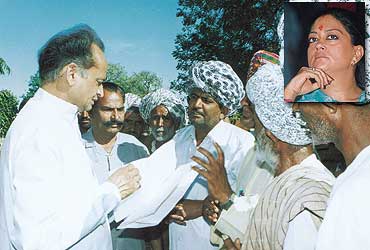 No aggressive Hindutva here, the Gehlot regime's lacunae could give the BJP space for manoeuvre

The winds of Gujarat will inevitably blow across bordering Rajasthan but are unlikely to generate violent storms. Rajasthan may witness "assertive" rather than "aggressive" Hindutva, say state BJP leaders. The vhp has been focusing attention on the state, with Togadia making frequent visits this year. In April, he sneaked incognito into the riot-affected Ganganagar district after the state government banned his entry. He was in Jaipur on December 15, the day the BJP swept Gujarat.

The Vanvasi Kalyan Parishad has been making steady inroads in the tribal areas of the state, particularly the Udaipur division. And when Modi set foot in Abu Road on the last leg of his gaurav yatra, state BJP leaders arrived en masse to show their support. BJP treasurer and state in-charge Ram Das Aggarwal announced that Modi would campaign in the state.

But no one expects Gujarat-style violence in the run-up to the state elections. This year, there have been three incidents of communal tension, in Ganganagar, Bhilwara and Barmer, but all were successfully contained. Muslims account for 8 to 9 per cent of the state population. The community is concentrated in Mewat, Jaipur, Kota, Tonk and Jodhpur and is, as a rule, well-integrated, making communal polarisation of the Gujarat kind difficult.

Says Rajasthan BJP vice-president Om Birla, "In Gujarat, violence was answered with violence. Rajasthan is peaceful and nobody is going to initiate anything here. The BJP is in a favourable position thanks to the Congress government."

A senior BJP leader puts it candidly: "We don't need a dirty-tricks department. Gehlot's failure to grapple with the drought has already given us a big edge. As the drought worsens next year, so will the anti-incumbency factor, reaching a peak just before the polls." A detailed internal survey conducted by the party indicated that the BJP as of now has an edge in 141 out of 200 assembly seats. The 60-plus per cent turnout for the assembly by-elections seems to indicate a strong anti-incumbency sentiment.

In fact, its poor showing in the by-polls has got the Congress introspecting. Pressure is building within the party for a radical organisational change in the face of the BJP's two-pronged challenge. On the one hand, the Congress has to contend with the vhp, on the other is the formidable challenge posed by Vasundhararaje Scindia, who appeals to both Jats and Rajputs (she is married to a Jat). The BJP's been quick off the mark in Rajasthan and has already started a build-up of its chief ministerial nominee, Vasundhararaje.

As late as June this year, the Congress leadership had ruled out a change of guard in the state. Dissidence died down but has resurfaced with a vengeance. Most Congress leaders regard Gehlot as a chief minister with good intentions. But they do not think highly of him as an administrator and say he has failed to tackle the massive problem of drought relief. Although Gehlot has blamed the Centre for not cooperating with him, nobody buys his argument. "Only shock treatment and a top-to-bottom overhaul will work," admits a cwc member. This translates into a change of CM, PCC chief and the general-secretary in-charge.

With as many as 80 assembly seats influenced by the Jat vote, the Congress is seriously considering a Jat for CM. Accounting for a crucial 20 per cent of the vote, the Jats swung Congresswards in the 1998 polls. Veteran leader Natwar Singh and Lok Sabha MP Sona Ram are being touted as probables.

The former appears more likely, as he could counter Scindia's royal appeal.The Jat-Muslim combine is an effective one but the party is afraid of creating a "Jats versus others" caste polarisation. With this in mind, the party is considering replacing the Brahmin pcc chief Girija Vyas with an SC or tribal leader.Also, the currently underemployed j&k pcc chief, Ghulam Nabi Azad, might be asked to relieve the overburdened Ambika Soni and take charge of the state.

And Raja Will Have To Dig In His Heels