The Hawk On The King's Shoulder

Last week's crackdown in the Valley was the NSA's idea. And a bad one. 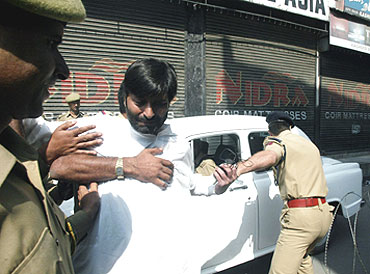 To illustrate the meltdown of India's authority in the Valley, Narayanan also detailed the number of occasions on which the crowds had evicted the security forces from their bunkers, the premature pulling down of the national flag at Lal Chowk on Independence Day, the frequent hoisting of the Pakistani flag, the chanting of pro-Pakistan and pro-Lashkar slogans, and the jeering and taunting of Indian troops. So on August 24, nine districts were handed over to the army, 20 battalions of CRPF moved into Srinagar, and curfew was imposed on the Valley. But this was no ordinary curfew. Local newspapers were banned and foreign journalists were rounded up and sent out of Kashmir, cable TV was shut down and the Internet temporarily disrupted. The sms facility on mobiles had already been withdrawn.

As an exercise in crowd control, the crackdown has been a success. Far fewer people were killed than had been feared—only eight in all—although hundreds were injured. But it is difficult to divine what the government hopes to gain. Will it douse the anger that people are feeling? Will the people go quietly back to a normal life when it is lifted? Or will the curfew only bottle up anger and turn Kashmir into a pressure cooker, bringing ever larger numbers out on the streets when it is lifted?