The Hard Trek To Mount Of Olives

It has taken 25 years for India to break out of its moral duplicity regarding Israel. West Asia has changed, so have Indian priorities that demand realpolitik. 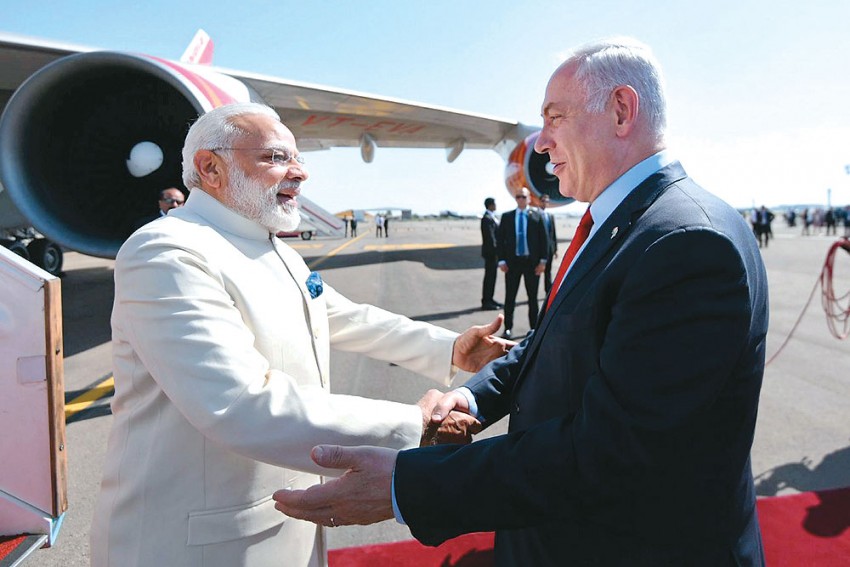 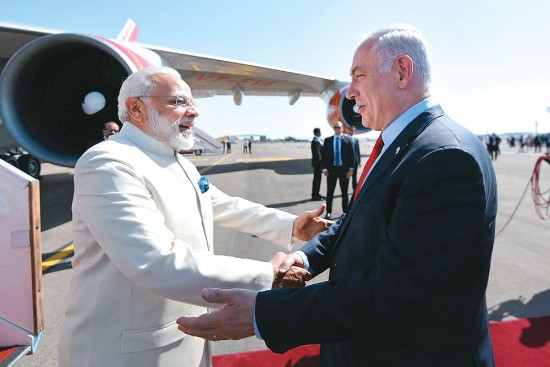 Prime Minster Narendra Modi’s visit to Israel from July 4-6 is a first by an Indian head of government. Israeli premier Benjamin Neta­nyahu flew down from Jerusalem, breaking protocol, to warmly receive Modi. It culminates a process that began 25 years ago, when P.V. Narasimha Rao recalibrated Indian foreign policy to the post-Cold War world. It would be useful to capture the evolution of bilateral relations.

In 1991, when Rao assumed office, he faced an empty treasury, a limping economy and India’s all-weather friend, the Soviet Union, imploding. Post the fall of the Berlin Wall, the world moved from a bipolar balance to US hegemony. Francis Fukuyama declared the end of history, implying victory of the Western liberal order. The US’ 1991 intervention in the Gulf, to successfully eject Saddam Hussein from Kuwait, confirmed the new unipolar global order. It then turned to settle the lingering Israel-Palestine dispute. The Madrid Peace Conference was jointly convened by the US and Russia on October 30-Nov­ember 1, 1991. Jordan, Lebanon, Syria and Palestine were invited to participate and engage with Israel. For the first time, Palestinians sat face-to-face with Israelis, albeit as part of the Jordanian delegation.

PM Narasimha Rao began reshaping not only the Indian economy but India’s foreign policy too. Imp­roving relations with the US was a pre-condition to his success. The US conveyed that post the Madrid Conference, invitees to the political sub-group meeting, to be chaired by US, needed diplomatic ties with all participants. India, historical cheerleader for Pal­estinian rights, could not attend even as an observer without full diplomatic ties with Israel. Sometime in October-November, when I was director (West Asia and North Africa), Foreign Secretary J.N. Dixit’s office sought drafting of a cabinet note to facilitate this.

The Patiala House library of the ministry of external affairs houses books on international affairs. Howe­ver, it did not even have a book with basic data on Israel, despite it being the principal antagonist of the Arabs and shaper of geopolitics of West Asia. The approval of the cabinet was received over the weekend. Indian policy in West Asia began to breathlessly adjust to geopolitical changes.

PM Rao now had to finesse the public part. He inv­ited Yasser Arafat, the unchallenged leader of the Pal­estinians, to Delhi in January 1992 to convey per­­sonally the Indian decision. Arafat could hardly object when his own delegation had been engaging with Israelis after Madrid. Similarly, Narendra Modi invited Palestinian President Mahmoud Abbas on a state visit before his own Israel trip. P.K. Singh, earlier the head of Americas division at headquarters, was named the first ambassador.

Palestine no longer dominates the age­NDA of Arab and Islamic countries. Since 9/11 and US intervention in Afghanistan and Iraq in 2001 and 2003, followed by the Arab Spring from 2010, the spread of Sunni radical Islam occupies strategic space. To counter it, Obama accepted a nuclear deal with Iran, to unsha­ckle the Shia regional power to lead a Shia alliance against  ISIS. Iran, with Russia, shored up the tottering Syrian regime, which the US did not anticipate.

Donald Trump as president upturned the Obama approach by picking on Iran or even threatening to renege on the nuclear deal. By his participation in the Riyadh Summit he unleashed new and dangerous fissures in the Islamic world between Shia and Sunni and Arab and non-Arab, i.e. Iranians and Turks. Modi-Netanyahu hugs are hardly noticed, with the Arab world focussed on the outcome of Saudi-UAE ultimatum to Qatar, expiring on July 4.

The BJP alleges that votebank politics of the Con­gress and non-BJP parties had stymied India diplomatically for decades, when Israel was only engaged surreptitiously. But commitment to the Palestinian cause dates from the Indian freedom struggle and the Khilafat movement, when the Congress espoused Islamic issues to co-opt Indian Muslims. Mahatma Gandhi emphasised in 1938 that “Palestine belongs to the Arabs in the same way that England belongs to the English and France belongs to the French”. He was declaring a global anti-British campaign, which besides consolidating Hindus and Muslims had an objective that went beyond paying lip service to the Palestinian cause. Thus, the Palestinian issue played both ways after independence. Domestically, it built a consensus against Israel’s illegal occupation of Pal­­estinian lands. Abroad, it kept Indian stock amongst Islamic nations high in the hope, often belied, that they would not rally behind Pakistan on Kashmir.

David Ben-Gurion, first premier of Israel, urged Albert Einstein to write to Nehru in 1947 to push for a sympathetic hearing on Zionism. “I trust,” wrote Einstein, “that you, who so badly have struggled for freedom and justice, will place your great influence on behalf of the claim for justice made by the people who for so long and so dreadfully have suffered from its denial”. India voted against the UN partition plan of the Mandate of Palestine in 1947. India saw the Israeli case tainted by the collusion of its exponents with colonial powers against Palestinians.

The journey to full normalisation, symbolised by Modi’s visit, has been gradual. Israeli PM Ariel Sha­ron visited India in 2003, invited by PM Atal Behari Vajpayee. The UPA government for ten years kept the door open, with calibrated ministerial visits, but Defence Minister A.K. Anthony dithered, neither visiting Israel nor hosting his Israeli counterpart. In fact, he blacklisted some Israeli defence suppliers for alleged corruption. Modi used his first three years in office for engaging Gulf and West Asian countries. He sent President Pranab Mukherjee to Israel in 2015, including the traditional detour to Ramallah, the headquarters of the Palestinian Authority.

PM Modi’s visit by de-hyphenating Pal­e­stine from Israel banishes the guilt-laden trepidation in engaging Israel. It also acknowledges that the Palestinian issue is complex. Possible solutions, like the Quartet Plan or the Arab Plan, are beyond India’s capacity to shape. Indian foreign policy towards West Asia thus shi­­fts from sloganeering to pragmatism. Interest­ingly, till President Mukherjee’s visit, India was demanding a Palestinian state ruled out of East Jerusalem. Now, India is calling for a two-state solution.

India-Israel ties are diversified. Israel is the second biggest defence supplier to India. India and Israel have been in conversation for years on low water use cultivation of crops, arid zone cultivation techniques, hybrid crops etc. A new $40 million research and development fund has been created for joint research. There are hints of major defence purchases, but such sales are normally not finalised during high-level visits. Whether some cutting-edge weapons sys­­tems are sold by Israel, including armed drones, would indicate the additional heft of Modi’s visit.

During PM Netanyahu’s March visit to China and talks with Chinese PM Li Keqiang, cooperation was discussed in areas of basic science, modern agriculture, clean energy and biomedicine. China also pointedly advised adherence to the two-state solution and early resumption of peace talks. China has also been investing in Israeli companies. Like with India, interest was expressed in ‘innovation cooperation’. Thus, despite the bonhomie, Israel will tango with both the Asian giants without taking sides.

PM Netanyahu took PM Modi on a visit to the grave of Theodor Herzl—the father of Zionism. He would be the counterpart of Savarkar, who coined the phrase ‘Hindutva’. The philosophical guides of the two PMs show ideological convergences between the core beliefs of the two PMs that leaders of a theocratic and secular state should normally not have. Perhaps Modi’s journey is not a new bridge between India and Israel. It is a happy reunion between kindred souls.

(The author, a former diplomat, was India’s ambassador to Iran)

The Art Of Peace