The Hand That Calms

More than ever, the two countries need lasting peace. The world stage beckons. 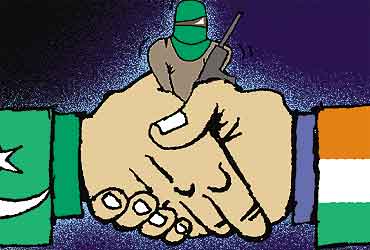 outlookindia.com
-0001-11-30T00:00:00+0553
Pakistan's offer of a ceasefire on the LoC, and India's acceptance, have been hailed all over the world. Expectations are running high that this could be the beginning of the end of the half-century-old dispute between the two countries, and therefore of another hot spot on the world map. Only, the Indians harbour a degree of scepticism. Wasn't it just three months ago that external affairs ministry spokesman Navtej Sarna dismissed an offer of a 'two-stage ceasefire' starting with the LoC—made by Gen Musharraf to a team of visiting Indian parliamentarians—as "containing nothing new". If so, then what has prompted this sudden discovery of 'something new' in Pakistan's gesture?

The truth is every peace initiative in the subcontinent in the last 50 years has been essentially insincere, designed more to score points with the US and other major powers than to genuinely seek a solution. Even the latest ceasefire is not without an infructous precedent. Musharraf had declared a unilateral ceasefire on June 26, 2000, and the guns had remained silent for over a year. But that ceasefire had been part of an effort to address the Kashmir dispute on terms that were favourable to Pakistan, for it was followed in just one week by the declaration of a unilateral ceasefire by the Hizbul Mujahideen in Kashmir and an offer to hold talks with the Indian government. Islamabad's goal had been to get the Hizbul to insist that Pakistan be brought into the talks once they had begun. But the overwhelming yearning for peace—rather than political change—that the ceasefire uncovered in Kashmir spooked Islamabad into making HM leader Syed Salahuddin insist upon Pakistan's inclusion from the very beginning. A demand that India could only refuse. As a result, the three-month ceasefire ended within a fortnight.

It is therefore perfectly possible that on this occasion too the ceasefire on the LoC will lead nowhere. As Pakistan foreign minister Khursheed Mehmood Kasuri said in an interview to Outlook, there are important lobbies in both countries that will insist upon playing safe by assuming the worst of the other government's intentions. But it is imperative that policymakers from both sides rise above their perhaps very reasonable doubts and make the present ceasefire the first step on the long road to a genuine peace. The reason is that while India and Pakistan have long been locked in a death dance with each other, the rest of the world has changed beyond recognition. As a result, today the two countries are dancing on the edge of an abyss.

The main change is the 'crusade' that the US has launched against a significant part of the Islamic world. While few in the West are prepared to concede that this is what it has in fact done, the plain fact is that in the past two years the US has invaded Afghanistan and Iraq, shown unrelenting hostility to Syria and Iran, and backed Israel against the Palestinians without allowing moral doubt or a sense of fair play to interfere with what it is doing. As a result, there are perhaps 10 Islamist terrorists today to every one there was when Bush began his 'war on terror'.

The threat to India and Pakistan comes not from the success of the US crusade, but its imminent failure. In Afghanistan, the Taliban continues to gain ground. In Iraq, the Americans have abandoned nation-building dreams, and have virtually committed themselves to leaving the country by next June. In both countries and in other parts of the Islamic world, the Americans' discomfiture will be hailed as a jehadi victory. India and Pakistan will be caught in the middle because while both sided with the US in its attack on Afghanistan, thereby alienating the jehadis, neither sent troops to Iraq in the US' hour of need.

Today, both countries need desperately to limit their vulnerability to external threats or pressures, whether from Islamic terrorists or the US.They can only do so by improving relations with each other and moving by stages towards a settlement of the Kashmir dispute, for only thus will they close the window through which other countries and the Islamic fundamentalists have been able to enter the Indian subcontinent.

Admittedly, there can be no negotiated solution to the disputes that plague the two countries without a significant measure of compromise, but the case for compromise does not rest upon the evasion of threats alone. Today, only India and Pakistan, acting together, can restore peace in Afghanistan and stability in Iraq. India enjoys a vast amount of goodwill among the Northern Alliance in Afghanistan, and Pakistan's Pashtoons who outnumber the Pashtoons of Afghanistan enjoy even greater influence among them. Neither country is seen as hostile, and all share history, religion and elements of a common language. Thus only we have the necessary standing to broker a permanent peace, possibly within a federal or confederal arrangement, and to provide Afghanistan with the necessary financial and military support during the difficult transition to peace.

By the same token, any representative Iraqi government that comes to power will need to subjugate the tribal and religious leaders and local militias sprouting in all parts of the country today. It will therefore need considerable coercive power from the outset. While support should rightly come under the banner of the UN, there can, once again, be little doubt that Indian and Pakistani troops will be among those who will arouse the least resentment in that country.

In sum, the time has come for India and Pakistan to play a significant, constructive role on the world's stage. But they can only do so if they first learn to trust one another. That should be the ultimate goal of the process that has at last, so haltingly, begun.