A DNA test claims to identify sports aptitude, but there’s much to frown at 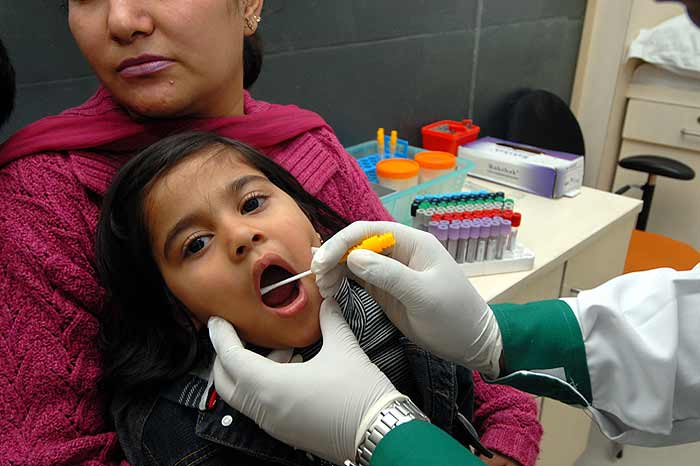 Inside The Sports Test

The five-year-old is called Annanya. Just a couple of years younger, and she might even have been named Saina. After all, mom Manisha Pahwa desperately wants her to be a badminton superstar. That’s precisely why the two are waiting their turn on a Saturday afternoon at a New Delhi lab that offers the Sports dna test.  The genetic test will determine—or so Manisha hopes—whether Annanya is naturally endowed to excel in badminton. And they’re not the only ones queuing up.

The seductive glamour that attaches to stars like Saina Nehwal because of  media and advertising focus has turned sports from one of the perennial ‘also-rans’ among life’s callings into a coveted career option. Many parents dream of brilliant sporting careers for their children, perhaps hoping they too would bring home millions in award and sponsorship money before they turn 21. With it appears the same disregard for their children’s rights to choose their own paths as a previous generation of parents who pushed their kids to become doctors and engineers.

“Imagine, all her medals kept together in the living room...I will certainly be proud. Even my colleagues will be proud that my daughter has become such a good sportsperson at such a young age,” gushes Manisha, a primary school teacher in New Delhi. “Annanya enjoys watching sports and can already tell Saina apart from Sania. So, I want to find out from this test if she will do well in badminton, which she plays at school.” For such doting and driven parents, the Sports dna test has come in handy (see box). What’s worrying is the fervour and sense of certitude with which they’re queuing up at labs with kids as little as three months old.

Contrary to what many parents seem to believe, the test doesn’t tell you conclusively if you are destined to succeed in sports. All of us have the same 20,000-odd genes found in the human genome, including the ACTN3 gene that was linked to sporting capability in a 2003 study. As  Super Religare Laboratories CEO Sanjeev Chaudhry says, “No one is a born couch potato”. What the test does instead is to study ACTN3’s variations and tell people which sport they are likely to excel in depending on these variations.

For some, like teenagers keen on a sporting career but torn between two disciplines, the test has its pluses. Any genetic evidence that they may do better in one of the two becomes a clincher in such a situation. Take the case of Sudarshan Swaminathan, a 16-year-old from New Delhi. Extremely passionate about basketball and cricket, he didn’t know which one to specialise in. His mother Sowmia Swaminathan, a private secretary in the ministry of heavy industries, sent him for the test about six months back. It showed he had the RR combination that made him “more suitable” for high-power sports. So, it was basketball he chose. “This was a very useful exercise for us because children tend to get confused,” says Sowmia. Adds B.R. Das, executive director at srl, “Parents now realise that their children often focus where they are not talented. If information is available about the sports for which they have a natural predisposition, then why not take advantage of that?”

Why not indeed, if the test is taken with an open mind, without undue over-reliance on its results—and with the knowledge that there are question-marks over its efficacy. The test has been criticised even scientifically on the grounds that the capability to excel in sports is not just determined by one ACTN3 gene but by as many as 200 other genes, besides of course several non-genetic factors. There is the oft-cited case of a Spanish Olympic athlete who excelled in long jump, a high-power sport that would require one to be genetically of the RR type, despite having no copies of the R variant. “The genes account for only about 20-30 per cent of one’s success. This test is actually more of a marketing gimmick,” says Balraj Mittal, a geneticist at Lucknow’s Sanjay Gandhi Postgraduate Institute of Medical Sciences, who has studied the occurrence of the ACTN3 gene among Indians. “What matters more is what you do with the other 70 per cent and that involves a good diet, mental make-up and training.”

SRL CEO Chaudhry, however, says that is making a “judgement too soon” on the efficacy of the test. He concedes a person may excel in a sport not compatible with his or her genes, even win gold medals and international acclaim despite the genetic odds, but maintains such sportsmen and women suffer after retirement with “injuries, muscle tear and other health issues”. “There is evidence building up that you end up paying later for doing a sport you are not genetically suited for,” he adds.
The scientific debate will doubtless rage on, as the science itself evolves, but eager parents seem oblivious to all of it. Since the test was launched earlier this year by at least two  labs—Advanced dna in Nagercoil in Tamil Nadu and Super Religare Laboratories, with branches across the country—several thousand have had their children tested. Schools are also smitten with the fad. Eager to make a clean sweep of medals at sports competitions, many are quietly building up armies of “genetically endowed” sporting kids.

While Religare offers it for as little as Rs 2,000, the Nagercoil lab charges as much as Rs 50,000, but the high price has not deterred some parents. Like Nagarajan John (name changed on request), an exporter from Nagercoil. Speaking of why he had his 10-year-old daughter take the test, he says, revealingly: “When I was young, I wanted to be a sportsperson. I failed but I should try and make my daughter one, at least maybe at the state level. If not, then at the district level.” Asked what if his daughter didn’t want to grow up to be a sportsperson, he replied frankly, “I haven’t thought about it. Now that you have mentioned it, I will.”

Meanwhile, as Annanya’s test results are awaited, it seems there’s little time left for her to enjoy her favourite sport—playing on the swing. Even if it is sports that she chooses as a career, it’s entirely possible that she might just love to try out one which does not figure among the ‘secrets’ unlocked from her genes. Will that all become irrelevant now, as genetic determinism catapults her from an innocent, richly  experimental childhood, into the world of competitive sports?

At Stake, Your Honour