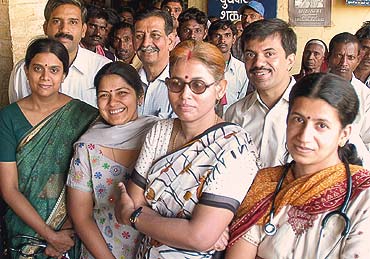 The people behind this amazing scheme aren't short of ideas. Their Jan Swasthya Sansthan (JSS) in Ganiyari buzzes with energy and inventiveness—a Rs 40 safe-baby delivery pack, diagnostic kits, cheap drugs, outreach clinics deep in sal forests where a tribal woman 100 km away from a motorable road can see a doctor, get her blood tested, and take home medicines at one go.

The big idea, JSS itself, was born in the heads of a mid-30ish group of doctors training at AIIMS in the late-90s—Yogesh Jain, Biswaroop Chatterjee, Anurag Bhargava and Raman Kataria—for whom politics wasn't anti-reservations brouhaha, but the inequities of the healthcare system. In end-'99, they dropped anchor here, with their wives, and a few fellow travellers. No one knew the region—it virtually chose itself. A derelict, tree-less government irrigation colony in Ganiyari was available on cheap lease. The health indicators for a population subsisting on single-crop, rainfall-dependent farming, were appalling. Nearly seven years later (with money raised from a few donors, such as Tata trusts) there are restored buildings, bustling opd clinics, labs, radiology equipment, a 15-bed hospital, two operating theatres, a trained staff of 70, flowering bougainvillaea, and many trees.