The Guru As An Equal

If media is the watchdog of society, Vinod was not just a good dog; he was a rare breed. 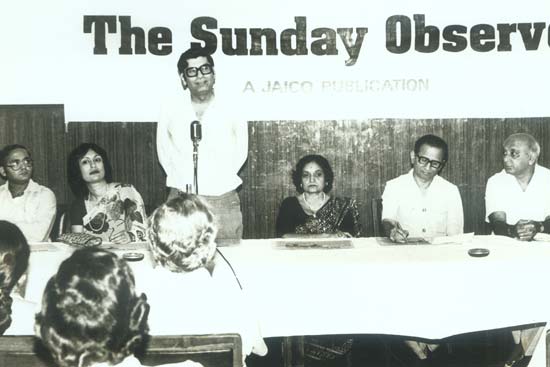 I strayed from the world of social activism to journalism in late 1981 when the colourful Russy Karanjia offered me a job in his recently launched tabloid morninger, The Daily. Four years later, Vinod Mehta invited me to join The Sunday Observer. In the three years that he was my editor, I was to learn that if media is the watchdog of society, Vinod (that’s how even a trainee was expected to address him) was not just a good dog; he was a rare breed.

In my very first month at the weekly, I walked up to Vinod with a question: “I have a story that shows up the Tatas in poor light. Should I go ahead?” Pat came his response: “If there’s meat in the story, I give a f*** about who gets offended.”

Most journalists are well aware of the two cardinal axioms of their profession. Press freedom has its limits. The media does not bite the hands that feed it: big business. Plus, dogs don’t bite dogs: keep fellow scribes off your radar. Vinod dared cross the laxman rekhas time and again. While still at the Observer, he published with great relish an evidence-backed report to suggest that the soft stance of The Times of India towards the Reliance group had something to do with the fact that its then editor, Girilal Jain, held shares in companies owned by Dhirubhai Ambani.

Curious as it might seem, even as he continued to make enemies in high places, The Sunday Observer was referred to with respect in corporate boardrooms. “We were treated like royalty when we visited corporate offices for ads,” the Observer’s marketing team would recall with nostalgia after Vinod moved on to launch The Indian Post in 1987.

Though often cold and frosty at the workplace, his admirable qualities were hard to emulate. Like self-mockery.

From him we learnt many lessons in journalistic ethics and personal integrity. During his Observer days, every member of the small editorial team was expected to attend the Tuesday morning meeting to plan the coming Sunday’s edition. At these meetings, even the most junior among us was encouraged to contribute her/his ideas; what mattered was the merit of the idea. While tough decisions were always his, equal opportunity was the prevailing ethos.

At one such meeting sometime around 1985-86, my colleague Jyoti Punwani and I strongly obj­ected to an article Vinod had written the previous week. While we had no doubts about his sec­ular credentials, we argued that however inadvertently, his column lent legitimacy to Hindu communal sentiment. While we held our ground, Vinod defended his article bef­ore the entire team for half an hour. Not for a moment during it or after was there even a hint that he was irritated or outraged.

Vinod, most likely, holds the twin record of being the editor who got fired more often than any other, as also an editor who left his mark in every media venture he entered, however briefly: Debonair to The Sunday Observer, Indian Post, The Independent, The Pioneer, Outlook. (It was he who chose to move on from Debonair and The Sunday Observer). His return stint as editor-in-chief of the Observer group under the Ambanis in 1990 lasted less than a month!

It is said that from a real guru you can learn many things, but never everything. My guru was no god. The same Vinod who would be at his cordial, jovial best at occasional staff get-­togethers, was always frosty, even heartless at times, in his demeanour towards team-members at the workplace.

On the plus side, the qualities you admired in the guru were difficult to emulate. Revelling in self-mockery was one of them. ‘Editor’ was the name Vinod chose for his mongrel dog. He always seemed to enjoy brickbats more than bouquets from the readers. This clearly was part of his USP, an integral part of his ‘editorial mix’ that had readers hooked to the successive publications he edited for over three decades.

Was it Mark Twain who observed: Never let the truth get in the way of a good story? Vinod’s magic lay in the conviction that the dharma of journalists was to take the truth to the readers in an interesting way.

In what was possibly his last interview to the media, he told Scroll.in that he had only one laxman rekha: secularism. If reborn, Vinod wanted another go as print media editor. But in an era where Hindutva is in fashion and lapdogs are in high demand, is there space for a Bohemian, irreverent watchdog? RIP, Vinod.

Javed Anand worked with Vinod Mehta at The Sunday Observer in Bombay.