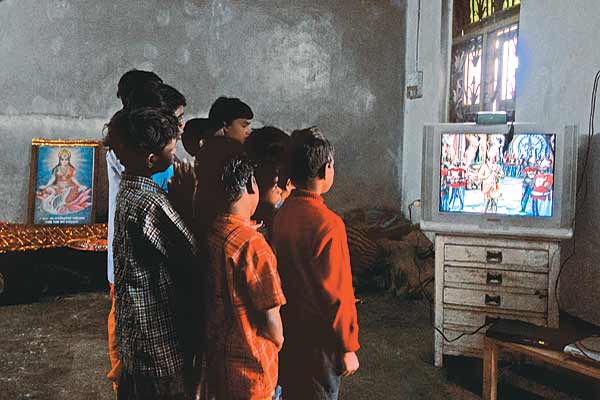 At the Gayatri Vidya Mandir, on the Dharampura Road in Jagdalpur, a group of children hang around a television set watching the Ramayana serial in a darkened room, which is also a classroom, recreation centre and dormitory. On the terrace, overlooking a mini-Tirupati Balaji temple, another lot is sitting cross-legged on the floor, eating a mid-day meal of rice, dal and vegetables.

For the RSS and its affiliate organisations as well as for other Hindu outfits like the Gayatri Parivar, winning the hearts and minds of the orphans of the conflict in Bastar is the first step towards the rapid saffronisation of southern Chattisgarh, once a Congress stronghold, with some CPI presence. Jagdalpur’s Gayatri Vidya Mandir is one such of the many facilities in the state, others found in places as far away as in Raipur and Rajnandgaon, where the orphans of the conflict are exchanging their tribal culture for a brand new Hindu identity.

The 35 children here—between the ages of five and 12 approximately—have all lost one or both parents, suspected of being Salwa Judum activists, about three years ago, to Maoist bullets. A plaque at the entrance reads: “Naxali hinsa se peedit bachchon ke liye punarvas yojana.” They are taught English, Hindi, Sanskrit, maths, computers, moral science and something called Bal Gyan Mala.

While some of the children are fortunate enough to receive periodic visits from the surviving parent, as little Sonku does on the day we visit the shelter, 12-year-old Hemant has had no contact with his mother or four siblings who he believes are still alive. He has written many letters home, he says, but not received even one reply. Nor has the
Gayatri Vidya Mandir bothered to try and locate his family, which lives just 150 km away in the village of Mankeli, near Bijapur.

The children are fed, clothed and are out of the conflict, but the education they are receiving leaves a great deal to be desired. Ask them what they want to become when they grow up, and the answer is no surprise. “Mujhe police banna hai,” says Hemant, very sure.

A Shiver Runs Through It