Boyhood friends remember him as shy and studious. Six years since his debut, they say Rahul Dravid hasn't changed. 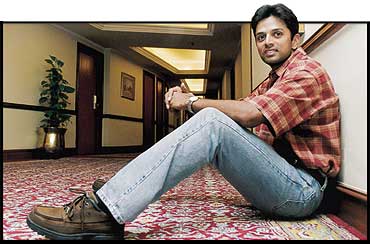 Friends, teammates and cricket writers, all talk about Dravid's biggest attribute: intelligence. "I see that he is in deep thought on the field all the time. Every time he fails, he has a discussion with the coach and senior players," says former Indian wicketkeeper Syed Kirmani. Cricket writer Rajan Bala reckons Dravid is the most intelligent player in the team. "To me he is the Aramis (the cleverest of The Three Musketeers) of Indian cricket. He's like Sunil Gavaskar and goes into a game with a lot of mental preparation."

Dravid's intelligence, coupled with humility, an ability to steer clear of controversies, and a fondness for books (he has been reading a number of biographies recently), sets him ahead of the pack in the Indian team. His friends, cricketers who played with him at junior and Ranji Trophy matches, his first coach Najam Hussain and teachers at St Joseph's Boys High School in Bangalore find him as accessible and courteous as he was at school. "He calls me Sir even now and listened attentively when I spoke to him about using the full face of the bat rather than slice the ball. This was before the recent tour of England," says Hussain, who coached "Mr Technique", as Dravid was known in his school team. His parents, Sharad Dravid, a retired executive with Kissan's, and Pushpa Dravid, a professor of architecture at the Bangalore University, encouraged the team at every match and carried sandwiches for all the boys, he remembers.