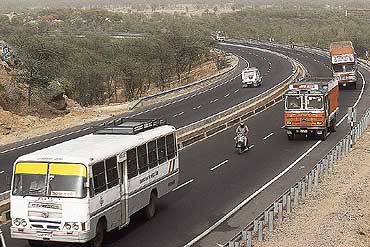 outlookindia.com
-0001-11-30T00:00:00+0553
It is not easy to justify forking out Rs 26.5 crore—over a period of 15 years—for the construction of a one kilometre stretch of a highway which costs only Rs 4-5 crore to build. But the National Highway Authority of India (NHAI) and the ministry of roads seemingly think otherwise. They discern a mysterious logic in this befuddling arithmetic. In fact, finance ministry and Planning Commission officials and technical experts involved in the highways project maintain it's a scam running into thousands of crores. Says an official: "From defencegate we are moving on to roadsgate."

Their objections to the highways project centres around the so-called annuity scheme. Under it, contracts are handed out to construct and maintain highways for which a pre-mandated payment is made regularly over a period of say 10-15 years by the government. The average cost of constructing a kilometre of highway—including land acquisition—is Rs 4-5 crore. But under the annuity scheme, an annual instalment works out to Rs 2 crore per km every year for a period of 15 years. In the end, this works out to a shocking Rs 30 crore per kilometre! One justification for the scheme is the government is free of any maintenance responsibilities for the contracted period.

The official explanation for this crazy arithmetic is that there would be no takers for the biggest roads project in Asia worth Rs 68,000 crore if such sops or "comforts", under what the NHAI terms the "annuity scheme", are not offered. They also point out that if the future depreciation of the rupee against the dollar is calculated, then the additional cost would not be so high.

Strangely, Indian engineering companies do not seem to figure under the annuity scheme. Those in the running are a clutch of Malaysian companies—IJM Berhard Corp, Gamuda, Renong and WCT (Malaysia), a consortium. It is in the backdrop of the interests of these companies in the highways project that the PM's visit to Malaysia, which kicks off on May 13, gains significance. The National Highway Development Project (NHDP) is the prime minister's "dream project" and its components are envisaged to connect the Golden Quadrilateral and the north-south and east-west corridors.

In the prime minister's entourage is Nasser Munjee, managing director and CEO of the Infrastructure Development Finance Corporation (IDFC), the sole consultant to the NHAI and an active promoter of the annuity scheme. Munjee is very proud of the scheme which, surprisingly, has not been tested anywhere else in the world. "What if it has not been tried out? Let us try it out in India," he told Outlook on the eve of his departure to Malaysia. "I have helped formulate the scheme with the PMO's task force on infrastructure, then under N.K.Singh," he adds.

But, says a finance ministry official: "Even if future maintenance costs for 15 years is three times the cost of construction, the annuity scheme makes no economic sense, so it must be scrapped. When you give out contracts of this kind, there is every reason to believe that there is corruption or that you are favouring one company or the other."

The first of the contracts under the annuity scheme has been finalised. The 65-km Panagarh-Palsit stretch in West Bengal has gone to the Malaysian firms Gamuda and WCT. According to Munjee, the annuity scheme worked out on this stretch would mean the government pays Rs 138 crore annually for a 12.5-year period. The annuity payment begins after the construction is completed in two-and-a-half years.  According to highly placed sources, the deal worked out is that the government will pay two half-yearly instalments of Rs 69 crore for 12.5 years. What is not factored in is that the actual 65-km stretch would cost no more than Rs 325 crore to construct, while ultimately the government would be forking out an astonishing Rs 1,725 crore.

Despite finalising the deal, the government has not announced the name of the Malaysian bidder. Says a senior IDFC official: "I don't know why there is this delay in announcement. Perhaps it will be announced during the PM's visit to Malaysia."

DP. Gupta, a former director-general (roads), is vocal in his opposition to the annuity scheme. "The Panagarh-Palsit project is unsustainable as the bidders are asking for too much. It is working out to Rs 2 crore per kilometre per year. If the government continues with the scheme, its funds will be blocked and pressure will mount on the government to raise money through further diesel and petrol cess."

The unviability of the annuity scheme has been brought out in a seminal report by Gajendra Haldea, a joint secretary in the finance ministry on deputation with the National Council for Applied Economic Research. Scathing in his comments, Haldea notes: "In the Indian context, the constraints of budgetary allocations, present as well as future, makes annuity unviable as it can at best sustain only a fraction of the highways development programme."

This point is further explained. According to Haldea, annual budgetary resources for highway development, including money collected as road cess from sale of petrol and kerosene, amounts to Rs 5,000 crore. If this money is given out for highway construction under the annuity scheme (at the rate of Rs 2 crore per km per year) then what one would have is 2,500 km of new roads. But the catch is that the Rs 5,000 crore annual budget would be locked for 10-15 years to service the scheme. Consequently, the government will have no money left to finance further construction. Put shortly, a finance ministry official maintains that what the NHAI and the PMO is "unleashing on the country is another Enron-like situation".

What planning officials as well as strategists in financial institutions advocate is that instead of the annuity scheme, the roads sector must be privatised. This, they point out, would take the burden of financing projects off the government. "Privatisation means business houses investing their money and exposing themselves to the risks involved. In telecom, for example, the operators have invested their money and have taken a financial risk," says a senior bureaucrat. But there is no risk in the highways project under annuity. In fact, here, the government is guaranteeing a steady flow of payments. "So where is the privatisation? This is no different from giving out work contracts," says an analyst working with a leading financial institution.

Experts warn that politically too the annuity scheme could prove disastrous since the government is creating two conflicting systems of awarding road contracts. Says Gupta: "The government will be put in a bind if one state government accepts annuity and the other doesn't." There will then be a big fight over the allocation of the highway funds with the states not accepting annuity on the ground that road users in their state are paying toll while there is no toll in an adjoining state. Indian road engineering firms are not too pleased with this system and are crying foul. Says Kamal Morarka of Gannon Dunkerley, which has lost out on the road contracts: "There is no transparent tendering. The whole process is skewed against Indian companies. The government's condition is that Indian companies should enter into tie-ups with foreign firms to qualify. We find our role in the joint ventures rather marginal."

With no foreign direct investment coming in and the contractor not committing any investment while being guaranteed payments, the annuity scheme is indeed unique. At the official joint press briefing in March by PMO principal secretary Brajesh Mishra and the then OSD N.K. Singh, the annuity scheme was described as "an innovative financing technique". Innovative it certainly is. But an innovation that will bleed the exchequer.