The Gospel Of St Makelove

Don't think it's an OD on sex. It's a treatise on the subject: the Indian Penile Code. 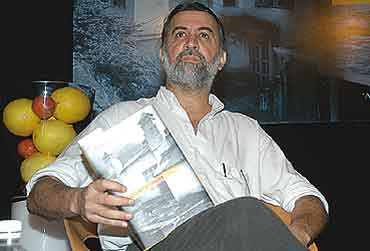 The Alchemy Of Desire
By Tarun Tejpal
HarperCollins Rs 500; Pages: 518
Tarun Tejpal likes a challenge. The bigger, the better. Whether it’s exposing match-fixing cricketers, or stinging corrupt politicians, our very own desi gonzo-journalist is renowned for his (metaphorical) balls. But to write a grand piece of literature about a writer failing to write a grand piece of literature, to write a testosteronic novel of sex, sex and more sex without sounding hammy or pornographic—seems like a more than usually suicidal mission for one of India’s premier kamikaze pilots. The desire to keep turning the pages must be partly ascribed to the delicious uncertainty as to whether this particular flight of fancy will stay the course, or crash and burn under the sheer weight of its own hubris.

The title at first sounds overweeningly pretentious. Till, about half way through the book, you realise it describes exactly what the book is about. It is a treatise, no more and no less, on how to take the bodily, sensual, heady, potent, life-propelling base metal of sexual love and transform it into the pure gold of art. An aspiration as lofty and—perhaps—as doomed as those renaissance apothecaries pounding their pestles of cinnabar and quicksilver in search of the philosopher’s stone. The novel is divided into five sections: Prema, Karma, Artha, Kama and Satya. Through the microcosmic love-story of the (unnamed) narrator and his wife, Fiza, Tejpal seeks to discover some eternal truths about love, action, money, desire and, finally, truth itself.

The narrator is a writer—or at least hopes to become one. His creative bursts are punctuated by frequent sex. He keeps meticulous tally of each textus interruptus: stars for sex with Fizz, skulls for solitary wanks. The narrator wants to write a grand narrative, "I did not want to write a small book about small things.... I wanted to write the capacious stuff. The grand drama of life, the sweeps of history and ideas of civilisations, the arching movements that make and unmake the world." The manuscript, deservedly, ends up at the bottom of Sukhna Lake. His second attempt suffers a similar fate. Unfortunately for this book, both abortive attempts are described in fulsome and unnecessary detail.

This is a big book. In all senses of the word. But in literature, as in sex, less is often more and size isn’t everything. We get to the "plot"—a historical drama travelling from an orientalist curio shop in turn-of-the-century Manhattan, via a Paris so louche it would make the Moulin Rouge blush, to an explosive menage a trois in the foothills of the Himalayas—only in Book Four, nearly two-thirds of the way through. By this time, exhausted by the unflaggingly enthusiastic sex of the narrator and his wife, the reader is impressed less by their inventiveness, athleticism and earth-shattering passion than by their sheer stamina.

V.S. Naipaul’s jacket puff hails this as "a brilliantly original novel from India". But what is ‘original’ about it? The descriptions of the hills are Sealyesque and Corbettian; the satire on modern Indian life has echoes of Rushdie and Mathur; the grand historical drama has touches of Scott (Paul, not Fitzgerald) and Vikram Chandra—whose Love and Longing in Bombay even has similar chapter titles, Dharma, Artha, Kama.

Tejpal, I suspect, would prefer to see himself as a direct descendant of the holy trinity of priapic prose: Hemingway, Mailer, and Lawrence. For like them, he seeks to understand the human condition—not from the top down, but (if you’ll excuse the double-entendre) from the bottom up. And herein, perhaps, lies his originality. Unlike Aniruddha Bahal’s schoolboy fantasies, or Shobhaa De’s glamourpuss trash, sex is not the masala to spice up a story, but is the main dish.

At times, the prose is decidedly purple. At others, Tejpal’s alchemist owes more to Paulo Coelho than Ben Johnson: "Her face was an ecstasy, a luminous oil by a Renaissance master." But for all this, Tejpal manages to tell a moving story: a story of love and death and the struggle to create meaning out of the messy stuff of life. Whether he succeeds in scaling the heights of great literature, or ends in a suicidal conflagration, is for readers to decide.