Unbeknownst to us, the NRI has taken on the battle for Bharat. A fight for souls is on. 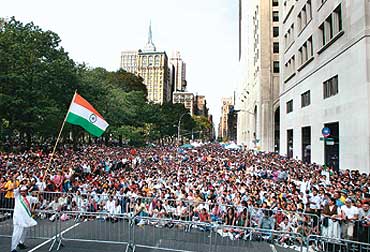 Their story begins in the Golden Age of the Vedas when all knowledge emanated in Bharat, from zero to infinity. It was nurtured by the good men and spread by them to the barbaric rest. Debate and democracy came naturally to us. Astronomy and economics were understood while others were roaming the jungles. Even women sages were welcome. The caste system was merely division of labour and gems were falling off the robes of kings for the less fortunate. This era without errors abruptly ended with the invaders, all terribly Muslim and plundering. They wreaked havoc with Bharat, stayed on to rule, converted and coerced at will. Lying, cheating, Mir Jaffers all.

You want to talk about Modern Times. One name should suffice—Pakistan—that warring home of a terrorist nation, which cannot accept that a Hindu king voted Kashmir into India. Started three wars against Bharat, got defeated but still continues to slash with a thousand cuts, killing innocents with bicycle bombs. Even the gullible Americans now know that all terrorists have a Pakistan address at least once their active life. Pakistan has corrupted Bangladesh too with its terror ideology and sleeper cells all working against India. They breed, and talk of Lebensraum, that Hitleresque idea of demanding "living space", slowly seeping into India, migrating illegally by the millions. "Awake, you Hindu," goes the cry.